Reminder - Manny Malhotra will be at the Sharks Store tomorrow from 4:30 - 6pm.  See you there.

Rudy Kelly is was savoring the fact that the Kings are were (temporarily) on top of the Western Conference, while his least favorite team in the universe is (still) at the opposite pole.

Is Marty Turco on the trading block?  Defending Big D with your info.

One of the teams Turco might be sent to does indeed need a goaltender... so much so that they're looking at rec leagues, as well as the Thrashers.

[UPDATE] - The Flyers reacquire Michael Leighton from Carolina, where he'll reunite with Laviolette.

Five for Howling's primer on Ice Edge, the group purchasing the Yotes.

In the spirit of Christmas, the Dallas Stars have been giving away points to their W.C. opponents.

The Phoenix / Saskatoon Coyotes doesn't quite have that ring to it.... but it's going forward anyway.

In case you missed it, the Washington Capitals cleared up some massive overhead by shipping Michael Nylander to the AHL, where he'll join (drumroll please...) Patrick Rissmiller.

Is the Bulin Wall coming down?

Out-shot teams that manage to win.

Behind the Net on size differential between players being hit and those hitting them.

Our friends at SLGT will soon be getting a Brett Hull statue outside the Drink Scotch, which should be a fitting place to recount your unpublishable Hull stories (right, Chris Gift?  Ho ho ho indeed...).

Kiprusoff should be on Team Finland (was anyone surprised by this?  No?  Moving on).

Signs the world is going to end = a Canadian journalist thinks hockey is going to work in Phoenix.

Despite the 5-game Sharks slump, Joe Thornton and Dany Heatley are still in the Art Ross and Rocket Richard runoff, respectively.  While you're admiring stats, take a good fucking look at Zenon Konopka... but don't make eye contact or he'll kill you. 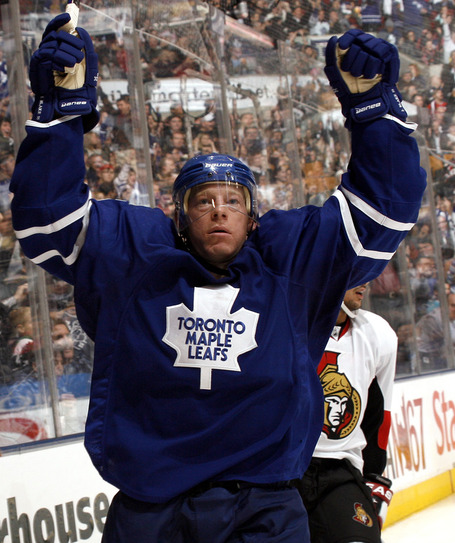 Jason Blake either shat his pants while being held at gunpoint, or he just scored a goal... you decide.