The NHL Board of Governors recently concluded their most recent meetings in Pebble Beach and Sharks President and Chief Executive Officer Greg Jamison acknowledged the possibility.

"We have been invited to go and we’re in the process of discussing it," said Jamison. "We’re optimistic we might do it."

If one had to venture a guess, I'd say there's a very good chance the Sharks end up heading overseas to begin the 2010-2011 campaign. Everything but official.

And with that comes some opinions which run the gamut from positive to negative.

The travel issue is obviously at the forefront of the discussion here, and rightfully so-- San Jose is already one of the most travel burdened clubs in the NHL. Throwing in a trip to Europe, especially if the organization manages to make a deep run into the playoffs this season, will only compound those issues. Speaking to David Pollak of Working The Corners, Douglas Murray stated as much by saying, "Seeing how some teams have done with that whole travel and stuff, I don’t know if I’m excited about that part of it."

On the other end of the spectrum, of course, is the business side of operations. While traveling overseas results in a loss of one home game's worth of revenues and concessions, the potential expansion of a team's fanbase and establishment in new markets provide an opportunity for the brand to grow. Furthermore, foreign born-players such as the aforementioned Douglas Murray, are afforded the chance to play in front of their friends and family in what is likely the first (and last) time in their NHL careers. And then you have foreign fans, like current Fear The Fin reader Brit Shark, who won't have to wake up at 3 A.M. to catch a game. 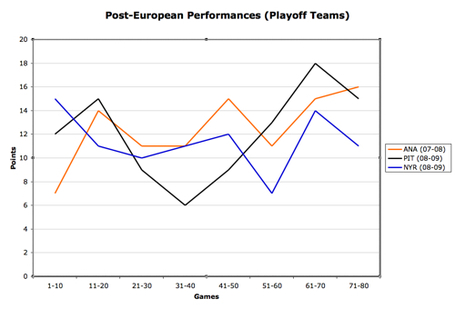 Here's the table for all the NHL teams who went to Europe the last two complete seasons-- as with the graph, you can see that the middle of the season (around the 20-40 game mark) generally doesn't bode well for the worldwide travelers, as the increased mileage from earlier in the year starts to catch up to them.

When looking at the team's individual schedules, it was easy to see the struggles Anaheim, Los Angeles, and Ottawa went through immediately after returning to North America. Those were some of the worst, if not the worst, five game stretches during the entire season. No surprise considering time zone changes and bearing the brunt of travel compared to opponents, but it is definitely worth adding as a footnote to the midseason dry spell we see as well. On the other end of the spectrum are the New York Rangers, who played their best hockey upon immediate return.

One would think that a trip to Europe doesn't deserve the stigma it's currently garnered, what with the Pittsburgh Penguins playing in a Stanley Cup Final during 2008, shipping off to Stockholm, and then coming back to play in yet another Stanley Cup Final the following season (which they won). However, it's hard to make the case that there isn't potential harm to a team's on-ice performance, especially for a bubble team that cannot afford to start the season slow. The decreased practice time caused by the massive road trip also isn't helping matters.

At the end of the day, I find myself somewhere in the gooey middle, much like my feelings on the eight Sharks who have made a case to play for their country in the Olympic games-- if it doesn't happen there will be little complaint, but if it does, there's no reason to think that it will be the kiss of death.

We'll save that moniker for the month of May.