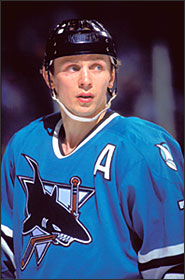 Note: This article begins a series that will look at some of the more important players in the history of San Jose Sharks, those players that throughout their hockey careers have earned the status of hockey legends, and we'll specifically focus on what these players are up to today. We'll begin with perhaps someone who is the perhaps the biggest legend to play in San Jose, Russian center Igor Larionov.

In the history of hockey, there are only four players who have won all there is to win when it comes to major hockey tournaments (Stanley Cup, Olympic gold, gold medals at the Canada Cup, IIHF World Championships and World Junior Championships). Igor Larionov is one of them (along with his fellow countryman Slava Fetisov, and two Canadian hockey legends Joe Sakic and Scott Niedermayer) and this February he will be honored for this accomplishments during a special ceremony that will take place during the Winter Olympics. Last year he became a first ballot Hall of Famer and is rightly considered to be a hockey legend.

Before Russian players were allowed to leave Soviet Union and play in the NHL, Larionov was a center on what was arguably the most dominant offensive line in all of hockey in the 80s, with Vladimir Krutov and Sergey Makarov playing alongside Larionov (the "KLM Line" as it's known in the West), and Slava Fetisov and Alexei Kasatonov at his back. It was than that he earned his nickname "Professor" for his extraordinary vision and ability to read the game, along with his intelligent appearance off the ice.

Igor Larionov joined San Jose Sharks in 1993/4 season and during the next three season he spent with the Sharks, he would play 122 games with the Sharks, posting an impressive 109 points, including 27 points in 25 playoff games.

Following his stint with San Jose Sharks, Larionov would go on to win three Stanley Cups with Detroit Red Wings until he would eventually retire in 2004, after spending 26 years playing professional hockey.

So what has he been up to since retiring from hockey? And what are his views on the state of the hockey today? Make a jump for more.

Since retiring, Igor Larionov has focused his attention on two things. The first is what he is most famous for, and it is his wine business called "IL Triple Overtime" based here in the States. The second endeavor is the more recent one, and it is of course connected to hockey. In 2008 Larionov got back to hockey as the director of hockey operations for St. Petersburg hockey club SKA that became a part of the newly organized Kontinental Hockey League. That job got many Russians excited, because they were hoping that it will finally bring Larionov back to Russia long term, since Igor lived in North America since leaving Soviet Union in 1989.

The stint with SKA, however, lasted only one year, as Larionov chose not to renew his contract for the next season. When asked why he chose to leave St Petersburg, Larionov responded that he did so because he did not see eye to eye with team's owners about how to build a hockey club for the future. Having seen how hockey operations are ran in Vancouver, San Jose, and Detroit, Larionov decided the easiest decision instead of arguing was simply to leave and return back to the States.

Larionov now resides in Detroit, where he's renting a house from Pavel Datsyuk and is hoping to buy his own soon. Before returning back to Russia, Larionov lived in Los Angeles where his son was playing youth hockey. As the son is getting older, Larionovs made the decision to move where youth hockey is very strong and where his son doesn't have to travel for hours to play games. Besides his son, Larionovs also have two daughters. The oldest, Alyonka Larionova, now has a TV show she hosts for Penguins. You may remember she was rumored to be dating Alex Ovechkin last year. The youngest is into fashion and design and is about to move to Montreal to continue her education. Before returning back to the States, however, Larionov declined Slava Festisov's offer to become General Manager of CSKA, stating that right now he's starting a new project here in the States and he'd like to focus his time and energy on that. In his new role Larionov will be offering consulting and agent services to young players.

In his recent interview to Sport Express that was published yesterday, Larionov shared his views on various topics, and I'm sharing few excerpts from that interview below. To read full interview - here are the links - Russian, Google Translation.

On the Current State of KHL

"I've recently visited Russia for few days and right before I left, I watched Detroit play Pittsburgh. following that, I watched Dynamo play CKA and the game appeared a lot slower to me. Yes, the guys were moving around, but it's harder to show interesting hockey on a bigger rink. There is too much of perimeter play, of useless movement, especially in the corners, despite the fact that many players are very skilled."

On KHL vs NHL

"My view is that they want to do business with KHL in North America. NHL is bigger than Gary Bettman. People are ready to share how the clubs are run, or the league or refereeing. Last year I invited SKA executives to spend a week in Detroit. Red Wings were ready to open their offices and share how they run their club, how they approach fans, clients, veterans, sponsors, TV contracts, ticket sales, security. Unfortunately, for various reasons that trip never happened. .. The breakthrough in our relationships with NHL must happen."

On Russian Youth Hockey vs Canadian

"Recently I attended a series of our Russian national youth team playing OHL all-star team. Unfortunately, we were outplayed in every way and for a Russian, it was very painful to watch. .. Canadians were thinking quicker, had better puck control, and dominated the neutral zone, on power play and on penalty kill. .. We're losing too many of our kids when they're 14-15 years old. It's not a secret to anyone that our youth hockey is corrupted. Too many players play in international tournaments that don't deserve to be there. Kids hear from the very young age that their parent bribe coaches to include them on their teams. We have to clean this mess up. We lose new Ovechkins, Malkins and Kovalchuks in the middle of all that."

On Chances of Russia in Vancouver

"On paper we look really good, but we don't win games on paper. One or two game can decide everything. You fail to score, you allow a goal, get nervous, focus too much on invidivual skill, and it's all over. I don't make predictions. There is still too much time left till the Olympic games and everything can change. The most important thing to remember is that some players will arrive to Vancouver being tired. NHL schedule is very tense due to the upcoming Olympic break, and it's very hard to keep players fresh and no one in the clubs is going to rest these guys either because they're paying them the big bucks."

On Coaching at the Olympics

"I was invited to serve as a coach-consultant for Belorussian Olympic team, but I politely declined. To do a good job, at such a short tournament I would have to know everything about the players and their skills. So all I could do was recommend others for that job."

"Things are going too well there as Russia won two most recent World Cups. Perhaps there is no need to fix something that's already working. I simply want to wish good luck to our boys in Vancouver!"