Share All sharing options for: Sharks Gameday: Hide Your Honeycombs

I would be remiss not to touch upon the travesty that was St. Louis-- the fact that a shorthanded goal was given up with six seconds remaining has probably been beaten to death in the game thread, but the truth is I didn't even bother to browse being in a pretty foul mood and all. My biggest issue during the last two minutes wasn't even the shorty, but the fact that the Sharks gave up a two on one roughly forty seconds beforehand. It was a great outlet pass sure, and you have to give credit to the Blues for busting their ass all game, but San Jose has to be aware the forwards are going to be creeping into the neutral zone well before they would usually. After that gets defused with an excellent save by Nabokov, the play heads the other way. And who gets off for a line change as the puck gets dumped into the offensive zone? Two players, Dan Boyle and Rob Blake. Joe Thornton gets a pass here as he was the requisite forechecker on the play (along with beating out the icing call), but Heatley and Marleau need to make a quick change so they don't get caught with tired legs in the defensive zone. Whether it was an honest mistake, competitive instinct, or a case of seeing that empty net opportunity to pad the stats a bit doesn't matter. That shift change needs to get done.

And now we move on.

Games against Calgary might be my favorite on the docket to watch. There's a good playoff rivalry, both teams have ties with the Sutter's, the personnel (in Calgary primarily) usually has it's fair share of common blood, and they've both been consistent regular season performers since the lockout with nothing to show for it when all the cards are on the table. San Jose hasn't made it out of the second round since these two teams squared up in 03-04-- the Flames haven't managed to break past the first.

The backend on Calgary is stacked (baby baybay)-- you have the well known Jay Bouwmeester and Robyn Regehr, premier shutdown defensemen who will likely see the lion's share of defensive zone draws against the HTML line*. Beyond that you get into the skilled yet overrated Dion Phaneuf, as well as the lesser known Cory Sarich (who probably won't fly under the radar tonight considering his brutally clean hit on Patrick Marleau two years ago). There's a lot of talent on that backend, and if San Jose is to bounce back from Thursday, it's going to be through a tireless cycle and a willingness to retrieve pucks off dump ins. That far-side winger is going to need to hit the blueline with speed in order for this to work.

*H/T to my buddy Kit Perkins for the nickname idea-- it's infinitely superior to the brutally uninteresting "Hamburger Line." No idea how that's catching on.

Vesce and Joslin were sent down yesterday. Hopefully Demers is getting the call up or Joslin is victim of another salary cap related move. Both know the system and have played and practiced with the team. Starting Jay Leach against the Flames a whole four days after claiming him off waivers would be a big time head scratcher.

In other news, Randy Hahn will be calling his 1,000th NHL game tonight so give him a warm welcome from the comfort of your couch. Also, be sure not to bring any Honeycomb cereal into The Tank if you're going to the game tonight. Little known fact: Olli Jokinen has a hat trick every time that stuff is in the building. 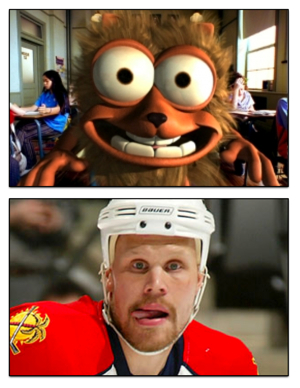