Share All sharing options for: The Fins Chime In = Reader commentary on the Sharks' 2nd regulation home loss 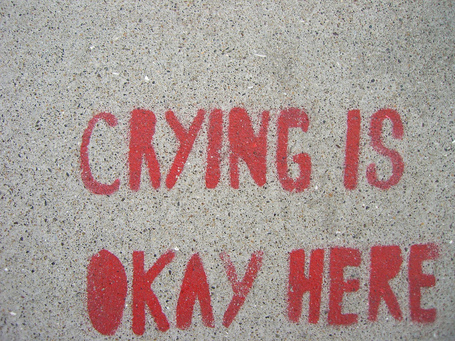 Ah damn, do we have to do this again?

In what hopefully will be a low-frequency trend, FTF has decided to once again allow its readers to be heard following another (sniff) regulation home loss.

Here's a belated pre-game analysis from our Fearless Leader =

With two heartbreakers under their belt (and an embarrassing loss to the LA last night), Chicago has a wide expanse of emotion to drive off. The Sharks, while not desperate for points, have a lot to fight for as well- a psychological edge should these two teams meet in the playoffs, and home-ice advantage.

Against Phoenix, San Jose had difficulty clearing the zone in the first period, a problematic theme that would be ill-advised in tonight’s third chapter. Although Phoenix is a good team (and one that has given us some excellent games thus far this year), they’re not a Western Conference contender- yet. On the other hand, Chicago is poised to explode. A win in the venerable Shark Tank could set fire to a squad that has had difficulty against the current division leaders (3-3-3, with all three wins coming against Calgary), and propel them to contender status amongst the Big Three.

It should be one helluva game.

On the delayed penalty called against the Sharks... =

a penalty against the Sharks in the first 30 seconds

Which turns into a goal by Jonathan Toews =

So much for extending the shutout streak

Holy shit that was quick.

What a painful way to get this going.

The Hawks breakout is firing on all cylnders right now. The Sharks? Not so much.

Koharsky- pull your head out of your ass and get it right the first time.

Give us back our goals you jerks!

And an explanation on why the goal was disallowed =

Sounds like you guys have had an explanation on this.. but here’s what I found..
78.5 Disallowed Goals – Apparent goals shall be disallowed by the
Referee and the appropriate announcement made by the Public
Address Announcer for the following reasons:

(viii) When a Linesman reports a double-minor penalty for high-sticking, a
major penalty or a match penalty to the Referee following the scoring
of a goal by the offending team, the goal must be disallowed and the
appropriate penalty assessed.

And yet another good point (two, actually) from chicagokill =

But did they add any time back to the clock? And did they not notice it was Kane and not Versteeg with the high stick?

I’m pretty sure a lump of coal is more desirable than the goal light flashing behind Nabby.

A longer word on the officiating =

Oh, and I’m pretty sure those refs just blew their chances to get assigned to playoffs. What with all the interference, tripping, roughing, and a 4 minute high stick that was missed. And then, of course, failing to get the right guy in the penalty box.

How old would you be if you didn't know how old you are? - Satchel Paige

And on Dan.'s reason for visiting =

I love anybody playing the hawks or the wings. :)

If they’re playing each other, I just always hope the rink bursts into flames.

How old would you be if you didn't know how old you are? - Satchel Paige

An assessment by Dave =

I am seeing the Sharks getting out worked….the Hawks have an awesome forecheck and an amazing transition. Speed, I think is pretty much equal, but we have to use our size here, and so far we aren’t doing it.

Have to say, it was a nice play even if it is a goal in favor of Chicago

After being down 3-1 going into the third, Fearless Leader makes a wish =

Anybody have a feeling

That Patty’s going to take a dump on the Bulin Wall this period?

Two notes on the absence of Dan Boyle =

Seriously- imagine if we hadn’t picked Boyle up this year? So many more nights that would look exactly like this…..

Between playing 32 minutes a night and directing a front-runner for the Oscars, it is understandable that you have gotten hurt. However, you need to get your ass back on the ice ASAP. We suck. Okay, we don’t suck, but we’re definitely not playing as well. And that’s bad.

And on Alexei Semenov's play =

I think the most telling thing about this game so far is that for long stretches, Semenov was the best player on the ice for the Sharks.

When that happens, you know you’re screwed.

(No offense to Semenov or anything, he’s definitely picked it up the past few games, but in no way should he ever be the best player on the ice).

In response to a latecomer's arrival on the blog, and her reaction to the score =

the sharks are human.

THIRD PERIOD
(Note = our readers were plainly discouraged at this point... we'll jump to 14:34 in the 3rd)
On Duncan Keith's rocket of a goal =

'It aint over till the fat lady sings." - Not Yogi Berra

Fearless Leader, with a parody lambasting our beloved captain =

KFC has chicken and corn
Sharks better score so I’m not filled with scorn
Patty my Captain where ya be?
Poop on the Bulin Wall for me please

and we don’t play again till Thurs. (right?)

And on the upcoming month =

Heavy emphasis on the HELL

And finally, word from one who was there =

Damn did that suck. Officiating was worse that McCreary or Fraser. I really don’t like going to losses. Danny can’t get back soon enough. On the bright side I got to meet Mr. K.

Yes, Brandon, yes you did = 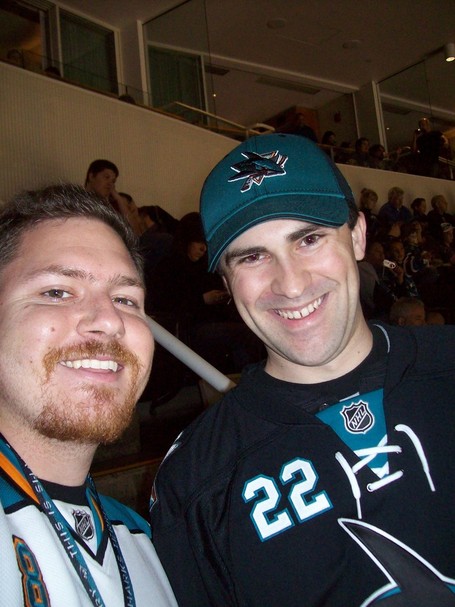 The Sharks have 4 complete days off before taking on the Carolina Hurricanes next Thursday.  In the meantime, don't be discouraged if the Boston Bruins seem to grossly outstrip us in points - we'll have 4 games in hand against them.
Fear the Fin also throws its considerable weight behind the St. Louis Blues (and St. Louis Game Time) when they visit the Joe Louis Arena on Monday.  H/T to Dan. for visiting tonight, BTW.
GO SHARKS.