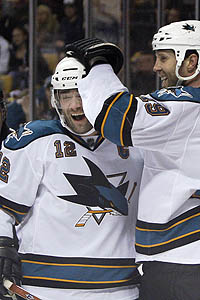 So excited about induction, they just cant hide it.

Well folks, we did it. After weeks of voting, we have finally completed the forward lines for Fear the Fin's "Greatest Sharks" team.

Upon the induction of Ray Whitney (51% of the vote) Mr. Plank, Mr. K & I sat down (over the internet) to discuss our ideal line combinations. Since we all like to pretend that we are coaches/GM's, we enjoyed the opportunity to flex our collective ego. Remember, the order of selection does not necessarily determine the line combinations, so we had some wiggle room.

There's no doubt that Joe Thornton deserves to be on line one; he was the first player to be selected to this team. In addition, Joe might just be the most talented player to ever wear teal. The 29 year old pivot has led the league in scoring since joining the Sharks in 2005.

On Joe's right, we've added Jonathan Cheechoo. We might be reminiscing a bit, but those 56 goals in 2005-2006 were just too much to ignore. Putting the Rocket Richard winner back on a line with Jumbo Joe just gives us a nice, tingly feeling inside.

As for the left wing, what's better than a little first line irony? Adding Sturm (the main piece in the Thornton trade) to this line was attractive for many reasons. None of these, however, are more important than Sturm's cannon shot. With Cheechoo and Sturm on this line, Joe has some very talented shooters to put away his pretty (dare I say sexy?) passes.

If you're a Sharks fan, you had to see this one coming. Although we have these players on line two, It's hard to argue that this line isn't the best in Sharks' history. As of the beginning of this year (Thornton has now passed Friesen for 3rd all-time), these three players have scored the most points in Sharks' history.

This line, in addition to being a point scoring behemoth, combines a great deal of speed, skill, and heart. Nolan and Marleau are the two most tenured captains in Sharks history. Marleau is, and Friesen was, a gifted and fluid skater. Nolan played harder than any other Sharks superstar.

And oh yeah, they each know how to put the biscuit in the basket.

But boy, that man could pass the puck. With 197 assists in 385 games with the Sharks, Vinny knew how to make a play. Although his time in San Jose came late in his career, Damphousse was a skilled skater and brilliant hockey player.

We've paired Damphousse with Michalek and Fallon; two players who were selected by the Sharks in the first round of the NHL Entry Draft (Milan 6th overall, Falloon 2nd overall). Falloon never quite lived up to the hype, but he still played a big part in the early success of the Sharks franchise. Michalek, who recently passed Falloon for 9th on the Sharks' all-time scoring list, is an emerging star and valuable asset to this team.

You really couldn't build this team without including Ricci. Although he wasn't as talented as many of the other players on this team, he made up for what he lacked in skill with his fierce style of play. He also loved being a Shark, which is good for mega-points in my book.

Whitney also made the fourth line,  as his physical style makes him a perfect fit to play with Ricci. I still love watching him beat Trevor Kidd in the playoff series against Calgary; that goal is one of the most significant in Sharks history.

And then there's Korolyuk. His stats probably don't merit inclusion, but he has somewhat of a cult following around these parts. All things considered, that boy could skate. We'll leave it at that.

So, ladies and gents, there are your "Greatest Sharks" forwards. If you have any suggestions for some line changes, let your voice be heard in the comments.

I'm glad this process worked out as well as it did. We're proud of you. However, brace yourselves for when the Defensive voting comes... that group is much thinner than the forwards.