The Lesser of Two Evils: FTF's pact with the Devil, aka Earl Sleek

Share All sharing options for: The Lesser of Two Evils: FTF's pact with the Devil, aka Earl Sleek 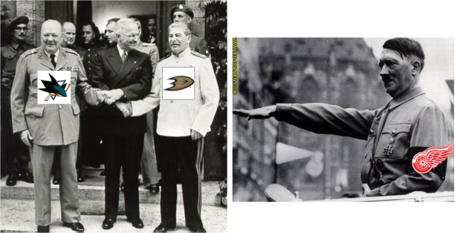 "We must make a pact with the Devil to defeat the Greater Evil..."

"If Detroit invaded the Pond, I would at least make a favorable reference to Chris Pronger."

Any man or State who fights against Detroit will have our aid. Any man or State who marches with Detroit is our foe. This applies not only to organized States but to all representatives of that vile race of bandwagoners who make themselves the tools and agents of the Red Wing regime against their fellow-countrymen and against the lands of their births. That is our policy and that is our declaration.

It follows, therefore, that we shall give whatever help we can to the Ducks and to the people of Anaheim, though they be our erstwhile foes. We shall appeal to all our friends and Allies in every part of the world (especially those at St. Louis Game Time) to take the same course and pursue it as we shall, faithfully and steadfastly to the end.

H/T to the British prime minister (a Sharks season ticket holder) for that stirring message.

Fellow Fins, do your best to hold back your vomit and stifle that teal conscience of yours as we throw our support behind Joseph Stalin Earl Sleek and the Anaheim Ducks. After all, tonight they are unquestionably the Lesser of Two Evils.

[Also - head over to Battle of California to show some love to Sleek and the gang. The puck drops at the Joe at 4:30 PST]