Share All sharing options for: Fear The Fin Online Store 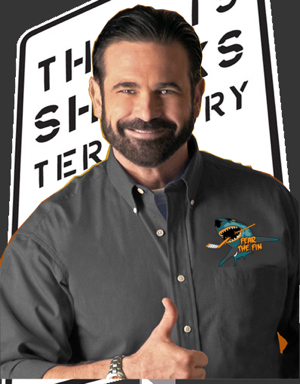 BILLY FREAKING MAYS HERE ON BEHALF OF MY FRIENDS AT FEAR THE FIN. WHEN I'M NOT SELLING OXY CLEAN TO YOUR GRANDMOTHER AT TWO IN THE MORNING I'M SLEEPING. WHEN I'M NOT SLEEPING I'M WATCHING HOCKEY. AND WHEN I'M NOT WATCHING HOCKEY I'M GROWING THIS EPIC PLAYOFF BEARD. I'VE GOT A BEARD 24/7 BECAUSE I'M ALWAYS GOING FOR THE CUP, MY MIDDLE NAME IS STANLEY PEOPLE SO LISTEN UP DID I MENTION I HAVE A KILLER BEARD WHATEVER JUST LISTEN UP.

FEAR THE FIN HAS DECIDED TO OPEN UP AN ONLINE STORE AND I'M HERE TO TELL YOU ALL ABOUT IT. THE LINK CAN BE FOUND RIGHT HERE AMONGST MY VOICE BUT IF YOU'RE NOT CERTAIN HOW TO CLICK ON A LINK FOUND WITHIN A GROWN MAN'S VOICE I'M SURE THESE PEOPLE WILL PUT IT IN THE SIDEBAR OR SOMETHING. THE ECONOMY HAS NEVER BEEN BETTER, THE SHARKS ARE MAKING A RUN FOR THE CUP IN ABOUT A MONTH, AND WE JUST BEAT MARTY TURCO IN HIS OWN BUILDING.

I'VE SEEN MY SHARE OF PRODUCTS IN THE DAY, ABOUT ONE HUNDRED AND FIFTEEN OR SO, BUT THIS IS SOME OF THE BEST I'VE EVER SEEN. JOIN YOUR FTF CREW AFTER THE JUMP FOR A LOOK AT A FEW OF THE PRODUCTS AND A REPRIEVE FROM MY YELLING BECAUSE THE OL PIPES ARE GOING HOARSE AND I NEED TO GO EAT A TWO POUND STEAK BEFORE HEADING HOME TO KNIT AND WATCH GILMORE GIRLS WITH MOM.

Plank: Who knows- are the kids safe?

Mr. K: Hey guys, what's with all the hoopla? Did I hear a wounded rhinoceraus who just lost her kids rumble through here or something?

Plank: Not exactly, but we'll get to that later. Just make sure to keep that hockey stick handy, we all may need it. Alright guys, shall we?

All: Let's do this thing. 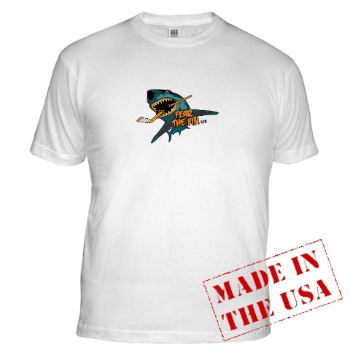 Think back to third grade. Your mom is going clothes shopping you. You send her off with a list of all the name brands that would vault you into extreme popularity. To your chagrin (you're a smart 8 year old, good vocabulary), she comes back with the most generic things possible. Adidas shoes with 4 stripes, shirts with reversed Nike swooshes, Reebach shorts. You wanted to die. Fast forward to today. Time to show mom who's boss (or at least, who stole the credit card). With an FTF shirt, people still wont know what the hell you are wearing. But it's not just a shirt with a logo, it's a shirt with our logo. That's gotta count for something. 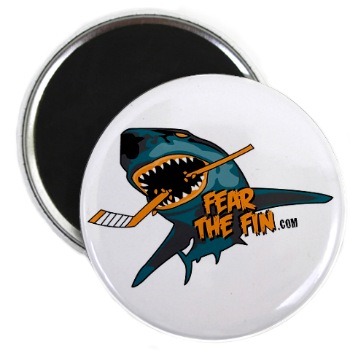 You know that picture from high school that your mother has up on the refrigerator? The one that wasn't there when you came home on a surprise visit, but that's not the point. Yeah, the picture with all the pimples airbrushed out of it, there's the one. Well wouldn't you like one of these nifty magnets hanging up on the fridge instead? Here's your chance to show your loved ones a thing or two about the internet, and reassure them that all the time you spend in front of that computer can be healthy. You're making friends after all! 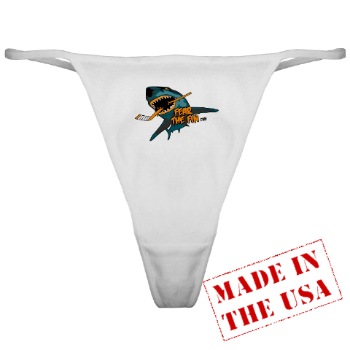 Here's one the ladies (and maybe some of the gents) will enjoy. Taking home a fellow Sharks fan after throwing down a few too many watery Bud Lights at HP Pavilion? Don't disrespect your one night stand with just any skimpy neglige. Treat them to the the real deal with Fear the Fin's saucy logo thong. It's complete with all the steamy-ness of the Gameday threads, the wit of your devoted FTF writers, and the mystery of a Sharks' second round ousting. Or just wear them around like any other underwear, we won't judge you for being boring. We can't promise we wont imagine the first scenario, though. 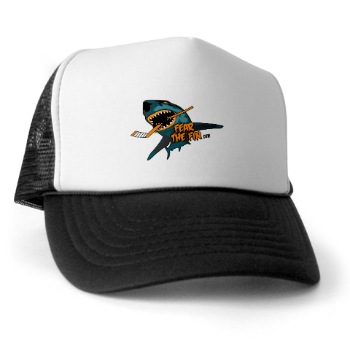 It's a hard life out on the open road, but what better way to show your support across this great country with a Fear The Fin trucker hat! From Mos Eisley to Pencey Prep to Diagon Alley, hit the open road with a song in your heart and a blog on your nog. 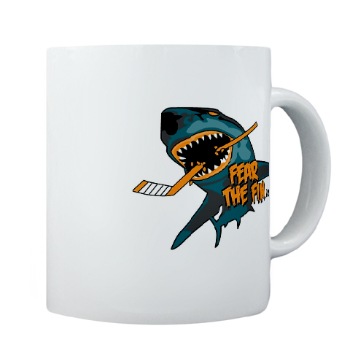 Water cooler talk getting you down? Ted from accounting won't let your get your two cents in? We have the solution. Just bring along your new Fear the Fin coffee mug and assert yourself. We can't guarantee people will listen to you, but we will say that the mug is made of heavy duty ceramic material. Material so durable that it's capable of inflicting serious head trauma. Legally, that's all we can say. Oh yeah, it's microwave safe too.

You can find all of this stuff and more at www.cafepress.com/fearthefinstore. There will be a link on the sidebar, and we promise we will never bug you guys about buying anything ever again unless it's a brief notice that we have added more products. Also, any special requests for sizing and/or items can be made to fearthefin@gmail.com. Cafepress is really good about allowing us to add items/sizes, so don't be afraid to ask if something catches your eye.

Everything on there is almost at cost. All the profits we make (roughly one dollar per item) are being put back into the site in the form of prizes, promoting FTF at games, and future FTF events still in the pipeline.

Thanks again for always coming out and supporting the Sharks (as well as dealing with Billy Mays every once in awhile). March is only a weekend away.....