Share All sharing options for: Sharks Gameday: Square One

Well, shoot. There's really aren't any positives to take from that game. If you looked closely, even the small glimmers of success the Sharks found against the Wings could be turned around. Ehrhoff may have scored a goal, but he played like a chicken with his head cut off for most of the game. The Sharks may have drawn penalties, but the power play looked absolutely abysmal. Even the things that went right went wrong. Detroit may be a bad place for the economy, but it's a worse place for the Sharks.

If we can take one thing from the game, it's this: Detroit is a great team, and they're even better at home. Take a look at the breakdown...

The Sharks are lucky they're not in the Central division. We just can't play at Joe Louis. No question. But is Detroit really a better team than the Sharks? Thats debatable.

It sure looked like it last night... but it didn't look that way on January 17th. Or October 30th. In fact, when Detroit is in San Jose, the tables turn...

It's really not fair to say that either team is better. What we know, though, is that home ice is important when the teams play each other. Crucial, even. That's why the Sharks have to put last night's drubbing behind them and get back to basics. It all starts tomorrow with Ottawa.

After the Sharks lost at Detroit on December 18th, they came back to HP to face the Rangers. Although the Sharks won the game, they looked flat. A half hearted effort won't be enough this time.

If the Sharks want a chance at the cup, they have to play every game that way.

The regular season is important, and last night, we saw why. If the Sharks fall flat over the next few months and end up with the second seed, the road to the cup will most likely go through Detroit. That's not a good thing. The less games played at Joe Louis, the better.

So here we are in Ottawa. I'm usually not very superstitious, but the lack of Seagal in the Detroit gameday and the subsequent loss struck a chord. So here's some good (looking) luck for tonight. 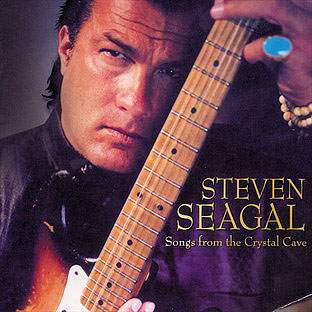 So put on your purple turtleneck, hook on your beaded bracelet, and slide on your turquoise ring. May songs from the crystal cave guide our Sharks to a win. It's game time baby.