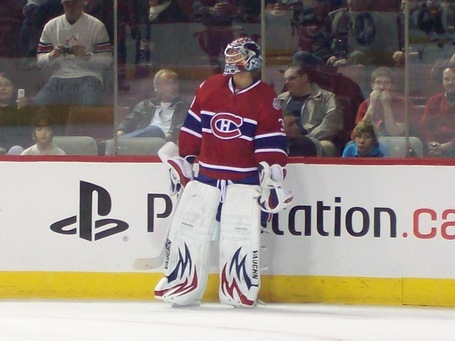 With Evgeni Nabokov out with flu symptoms, a second start in as many games for Brian Boucher seemed like heaven to some in the FTF crowd, who have actively been promoting the "Boosh needs more frickin' starts!" mantra in our game thread comments.

Hey, I was excited for the big guy, too - but let's be careful what we wish for.

Boosh let in 3 goals out of 4 consecutive shots (#7, 8, and 10 for Montreal) to allow the Habs to go up 3-0 in the first frame.  Admittedly, it's easy to pick on Boucher when other factors were involved - but to be honest, the even-strength goals were made possible by goaltender mishaps (while the power play goal was ultimately the result of San Jose's failure to clear the puck when it was possible to do so).

Before the jump, here's a notice from mymclife about the Sharks' record -

With this loss, we are the last team to have double-digits in either one of the loss columns. To say that on the last day of February is really something to behold.

A shame it had to end - but damn was it a good run.  Allow me to point out, however, that six of those ten losses have come since the start of the new year.  Hmmm...

The first two goals came from defensemen - first Andrei Markov from the point while his team was on the power play (with Christian Ehrhoff in the box for hooking Max Pacioretty), and then former Shark Josh Gorges two-and-a-half minutes later while at even-strength.  Boucher came out of his crease too far while following Matt D'Agostini's movements, and despite slipping while passing, D'Agostini set up #26 for his third goal of the season, with Boosh too far out to do anything.  The third, and game-winning goal, came courtesy of the Canadiens' captain, center Saku Koivu, at 17:47.  Boosh seemed to slip while trying to block the shot, allowing for an easy Montreal goal.

For what it's worth, Koivu and Markov each had two points, with Koivu getting the secondary assist on Gorges' goal, and Markov the only assist on Koivu's goal.  Tomas Plekanec and Mathieu Schneider earned the assists for Markov's goal.

To sum up the style of play by San Jose in that costly first period, I give you mymclife =

I’ve never seen such a contrast in play between zones. Its like, offensive zone the Sharks are amazing and are just continually getting the pucks to the net. In the defensive zone, they’re crap and forget to cover their man. I mean, Boosh was pretty out of position on one or two of the goals, but that was because the D wasn’t giving him any support and he had to be to take away the shot.

Hmmm... then maybe I was being a little too hard on Boucher.  Nah, couldn't hurt...

Not to be dismayed, the Sharks kept firing back, and potted two goals in a 49 second span at the start of the second period.  The first came from Joe Pavelski while Habs d-man Mike Komisarek was in the penalty box for interfering with Patrick Marleau; the second came from Joe Thornton while even-strength.  Pavelski's goal came off a rebound from Milan Michalek's shot; Dan Boyle got the play started, and earned the secondary assist.  Jumbo's goal was made possible by a behind-the-net pass from Patrick Marleau.  Christian Ehrhoff earned the secondary assist.

About thirty seconds later, the score was almost tied when another Marleau-to-Thornton setup went off the post... but <<c'est la vie>>.

Jaroslav Halak held off the Sharks' onslaught, stopping 46 of the 48 shots he faced.  That shot output by San Jose, by the way, broke their own NHL record (yet again!) for the most 40+ shot on goal games in a season (from memory, I believe it's now at 17)... for what that's worth.

What IS worthy of note is that the #2 star of the evening, Patrick Marleau, had a staggering NINE shots on goal - on top of the beautiful assist and almost-assist.  Sadly, he was on ice for two of the three goals against the Sharks - though I can't find complete fault with the man for how those goals went down.

Jody Shelley (predictably) got his arse handed to him by heavyweight (and stiiiiill champion) Georges Laraque, early in the first period (before the scoring began).  After landing the first punch, Jody was pummeled relentlessly though quickly by the Montreal-native.

After the two went off with 5 each, the game had just three penalties afterwards - two of which resulted in power play goals.  The third and final power play took place at 5:52 in the second period, when Matt D'Agostini hooked Patrick Marleau.*  That's right - it was penalty-free for the final 34:08.  The Sharks could have been 100% on their power play percentage instead of 50%, had hometown boy Marc-Edouard Vlasic's shot on a wide-open Halak not gone off of the crossbar.

Finally, some of you might have heard that I was at the game tonight, after flying out to Burlington, Vermont, and then driving up.  Lies, vicious, undeniable lies....

Kidding.  My experiences in Montreal will be the subject of a different post, because this one is already too lengthy.  Suffice it to say - Youppi got a fat beat down.  Word.

The Sharks return home to face the Dallas Stars on Tuesday, while the rest of us wait with baited breath to see what will happen before noon PST on Wednesday.