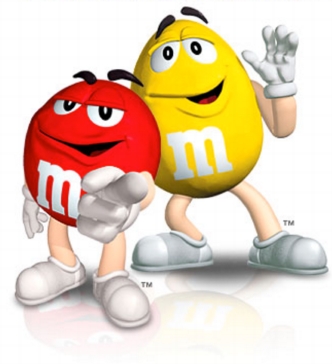 Although I would have loved to induct Skittles to the "Greatest Sharks" roster, the FTF readers went with an old staple, M&M's.

That's right, Marco and Milan are the next two players to be inducted to Fear the Fin's "Greatest Sharks" team. Voting was extremely tight throughout the week, but both players met the qualification threshold. Marco Sturm received 35% of the overall vote, while Milan Michalek received 33%.

I think you could flip flop either way here (i.e. Milan could have been second or third), but both players are deserving of a spot on the team. Sturm was a no brainer for inclusion. What's interesting, however, is that Milan would probably have been in the four slot (or denied entry all together) if we had held the vote last year. I think it's safe to say that he's gained some significant support for his play in 2008-2009 season.

Plank and I have been talking at length recently (closed door, War Room type conversations) about the maturation of Milan Michalek. It's surprising that a 24 year old player could even crack this list, let alone come in front of players like Granato and Whitney. The solid two way play, improved scoring touch, and increased physicality Milan has shown all year have really impressed us. If he continues his improvement through the next few seasons, it would be safe to say that his current contract is a steal for the Sharks. If I were Friesen (currently in the top spot), I'd be shaking in my skates.

FTF will dive deeper into the analysis once you make your final pick. This last LW vote represents the final forward slot on the team (Results: C, RW). As always, player analysis comes after the jump. Choose wisely...

Note: To be considered a member of the "Greatest Sharks", you must have played parts of a minimum of three seasons with the team. A player must receive at least ten votes and 25% of the overall vote to be included on the "Greatest Sharks" team. If the ten vote and 25% total is not met by at least four players, a second round of voting will take place which will include all players who did not receive at least ten votes and 25% of the vote.

Johan Garpenlöv: Playing on a line with Igor Larionov and Sergei Marakov, the Swedish Garpenlöv played a major role in the Sharks' magical playoff run during the 1993-1994 NHL season. During that year, Garpenlöv would contribute 22 goals and 41 assists (in 94 regular season and playoff games). In his career year (1992-1993), Garpenlöv would post 66 points, 22 of them goals, in an injury shortened season (79 games).

Tony Granato: Although injuries and relative old age would hamper his effectiveness as a member of the San Jose Sharks, Granato would contribute 99 points (57 goals, 42 assists) in 279 regular season games with the team. Although considered to be somewhat of a "feisty" player earlier in his career, Granato was the first and remains the only Sharks player to recive the Bill Masterson Memorial Trophy after he overcame a potentially career ending brain injury the season prior. Granato was a strong voice in the locker room; he helped lead San Jose to the playoffs in four of his five seasons with the team.

Ray Whitney: Drafted by the San Jose Sharks in the second round of the 1991 NHL Entry Draft, Ray Whitney is known most for his late-in-game heroics. During the 1994-1995 Stanley Cup playoffs, Whitney would score a true "elimination goal" in his second season with the Sharks, putting the puck past Calgary Flames netminder Trevor Kidd in the overtime period of Game 7. Whitney would go on to score 121 points in 200 regular season games with the Sharks before being signing with Edmonton to start the 1997-1998 season.