Share All sharing options for: Fear the Fin's Q&A with Logan Couture 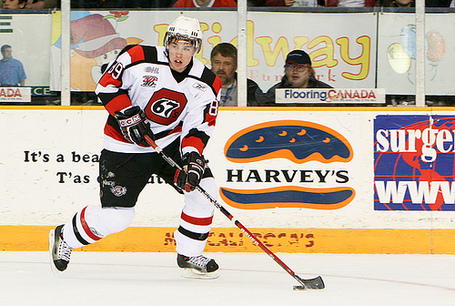 As the Sharks' top prospect coming into training camp, the 19 year old Couture was one of the last players to be cut from the team. Coaches and players were impressed with his superb hockey mind and playmaking abilities, but sent him back down to the Ottawa 67's in order to continue his development.

After being touted as one of the best junior players in the world, Couture was picked 9th overall by the San Jose Sharks in the 2007 NHL entry draft. He's done nothing but prove he was deserving of that pick, if not a higher selection.

In 44 games this season, Couture has scored 54 points (21 G, 33 A). In a recent matchup against top NHL prospect John Tavares and the London Knights, Couture had a hand in all four Ottawa goals (2 G, 2 A). Ottawa won the game 4-2.

It seems to be only a matter of time before Couture makes his first regular season appearance with the Sharks. But before that happens, you get to ask him questions.

FTF has contacted the 67's, and Logan graciously agreed to answer some of your questions.

Submit your questions in either email (fearthefin@gmail.com) or comment form. The FTF staff will pick the 10 best and have them answered for you.

We want to give a big thanks to both Logan Couture and the Ottawa 67's for helping us with this request. I, for one, can't wait to see the kid in Teal.