Sharks Gameday: Back In Black

Share All sharing options for: Sharks Gameday: Back In Black

The Sharks are rolling out the Black Armor tonight, and I couldn't be happier. Not because of the uniform choice (although those things are mighty slick), but because good ol' Dan Boyle's back in the lineup. In order to commemorate this glorious occasion..... excuse me? Yes, I realize he was only out for two games, but did you see how the Sharks played during that time span? Trouble clearing the zone, no transition game to speak of, our blueline suddenly timid to jump into the play- it wasn't a travesty, but it showed us just how much Boyle (wait for it, wait for it) rocks.

Whatever. Grab your whiskey and six-string folks- it's time to take a ride.

[Editor's Note]: Remember your SPG Picks for a chance to win a Sharks Banner courtesy of Carrol's Cove; also remember to get your questions in by next Wednesday for FTF's Q & A with Logan Couture.

Back in black, I hit the stick rack

It's been three games but I'm glad to be back

We both got some Cup rings hanging around

I've been looking at my Corsi numbers and they're quite high

I got you glove side, this rubber ain't flying wide

Cruisin' through the neutral zone never wonderin' why

I was in a bang, with the Owen Koules gang

Nobody's going to tell us this second round we're gonna sink

So look at me now, I'm just making play after play 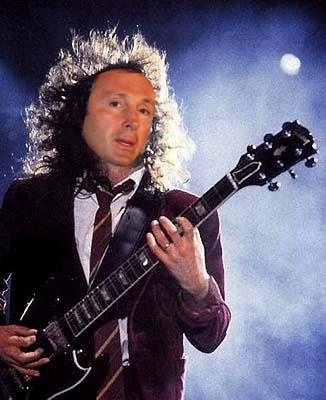 Shredding the guitar like he shreds opposing GM's rosters

Prediction: Sharks win 4-1. Goals by Boyle (x3) and Shelley. What the hell right? Oh and for some added kicks (at the 0:30 mark), imagine Drew Remenda as the drummer and Milan Michalek as the guy who's rocking out in the crowd immediately afterwards. The resemblances are uncanny.