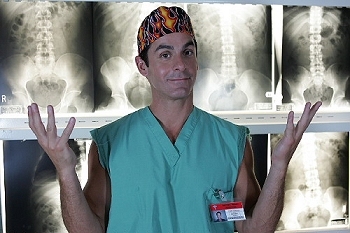 The Sharks’ charter flight was scheduled to leave San Jose 14 minutes ago, but Evgeni Nabokov and Rob Blake were staying behind.....

.....Among the other injured, only Marcel Goc made the trip, but McLellan told Emmons that Goc wasn’t a sure thing for Tuesday night’s game against the Wild.

Jump city- this could take awhile.

1) Injuries. The Sharks are missing some key components of their team right now- Jeremy Roenick, Marcel Goc, Evgeni Nabokov, and Mike Grier in particular. Granted, dealing with injuries is a huge part of what separates good teams from great ones. This should not be used as a crutch by the coaching staff or players to skirt the many issues layed out over the last week. From what I've seen from the cozy confines of my computer, it hasn't been imposed on us, and only mentioned briefly. That's a positive.

However, the loss of lower line depth does mean you're relying on your top guys for more ice time. The fourth line has been seeing limited minutes lately, and that can be seen in the legs of guys like Big Joe, Patty, and Boyle. The fact that the Sharks have the most games left to play out of any team (they're dead even with like two others or something) only compounds this problem. Last time we talk about games in hand being a plus.

Managing ice time is going to be a key for McLellan down the stretch. The injuries aren't helping anything, but Goc's return and the trade for Moen will help this out. Possibly throw Semenov on the fourth line intermittently once Blake gets healthy?

2) Other top teams are playing poorly as well. Sharks Hockey Analysis took a look this past weekend at how the other "heavyweights" across the league have been performing, and lo and behold they're in the same boat as San Jose. On the flip side, it just means that the Sharks have missed out on an opportunity to make some headway both in their conference and amongst the NHL in general, but on the double flip side (which was really just the first side, unless we're dealing with a coin in some crazy dimension) it means that it's only natural for a team to enter into a period of highs and lows.

Regardless, it's nice to see that we have company.

3) "Better to slump now than later." This is one of those points that really depends on your familiarity with the team this season. From FTF's archives we see that mid-December was about the time when things began to slightly slide south. Granted we were still winning games, but the dominant efforts became few and far between. See point number one for a possible correlation.

How much I buy into this one is still up in the air, but if they do manage to make a deep run, we can all collectively look at this moment and say, "Yes, it was better to slump now than in the playoffs." Then again, if they lay a turd in the first round we all go, "This was the point in the year when it all came crashing down to Earth."

Why I continue to do these hypotheticals is beyond me.

4) We're a spoiled bunch of brats. TCY did an article on this last night. He raised a lot of good points and- wait. Is that an ice cream truck?!? MA GIVE ME A QUARTER NOW NOW NOW, I WANT A HAGGEN DAZS!!!

5) The path of those before us. Jamie Baker you make me so angry sometimes. I went through all of the previous Cup winners (sort of like this post, except more in depth), looked at their record, was in the midst of setting up a nifty graph and table..... then I saw this. Thinking I could maybe pull a fast one on you guys, I carried on. Lo and behold Section223 links it in TCY's article and my confidence is at an all time low.

Whatever. Just listen to Baker.

Read into it however much you want, but it sure as hell isn't going to hurt.

7) Positivity. Our good friend Earl Sleek of BOC has been a huge proponent of this all season and..... oh yeah, look at the Ducks now.

No one mention that word ever again.

8) The second line. Not too many complaints can be found for the second line this season (sans the period around December when Pavelski was playing through an injury), and that's going to be absolutely huge going forward. When it comes to the Sharks, it's really pick your poison- roll your shutdown line against Big Joe & Co. and take a chance with Joe Pav's crew, or vice versa. We've stated before that Clowe, Michalek, and Pavelski could be a first line on many teams in the league, and we're sticking with that assertion until the day we die (most likely in a relatively unexciting way*).

Add that to the fact that home-ice through the first two rounds of the playoffs is all but a guarantee, and what you're left with is a huge advantage for the Sharks. McLellan will have the last change for the majority of games, and will absolutely baffle teams by exploiting the inevitable mismatches. Positiv- er, that sure is a plus.

9) The drive. You have to realize that as much as we talk about past playoff stinkers, everybody in the locker room is thinking the same thing. That extra push of being a top-seeded underdog will manifest itself in ways we cannot imagine.

Safe money on Big Joe blowing up these playoffs. Not because we have any stats to back it up, but because our gut says it will be so.

10) We just had to do this top ten list Letterman style. I've got nothing else.

I think when you look at the fanbase's reaction to the current play of the team, it's only natural we would react in the fashion we have. The previous three years of high expectations, coupled with the previous three years of second round losses, have compounded into a ball of energy that's extremely unstable. At best, it's a testament to our passion, and the consistency of talent we have been blessed with over the years. At worst, a testament to the inherent volatile nature of San Jose Sharks fandom, and frankly, fandom in general.

As everyone has constantly stated all year, this team will ultimately be judged in the playoffs. The pressures that come along with these expectations are enormous, but it is the nature of the beast, an obvious evolution from the "go get em next year boys!" thought process of old into the "we want progress and production" motifs we are currently delving into.

As I was putzing around Sunday morning, livid at the fact that an hour of sleep was rudely swiped from my grasp, I sat down and pondered how I felt about this situation. Then it hit me. "Jason. If you are freaking out now, just wait till April. Enjoy the relatively pressure free games while they last. A month's time is going to change all that."

I will tell you one thing- trading sixteen losses to end the regular season for sixteen wins at the end of June would be a trade I would make any day of the week*. That's not to say we are overly concerned for illogical reasons; it's just making it clear that there's still some modicum of faith lying around in the fact that this team will perform when it's all on the line.

* Provided I would even make it that far.

There's an undeniable feeling that this team will turn things around at some point within the next week. A win on the road against a team that embarassed us at home not even a week ago seems a likely, if not poetic, way to get things going.

Prediction: Sharks win 2-0. Goals by Michalek and McGinn. idunno's essay on M&M's from earlier this week gains even more clout in the scientific community.