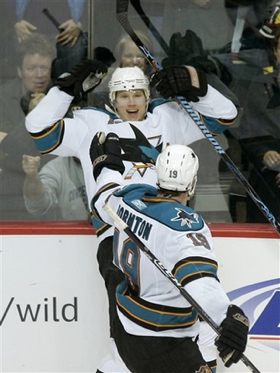 Joe: Stick em up punk, you're under arrest for impersonation. There's no way the Ehrhoff I know gets a shot on net.

First off, great to get two points again. It's sort of scary- I was beginning to forget how it felt. A few thoughts on the team, specific players, and the game follow.

Brian Boucher's recent troubles have been chronicled fairly extensively at FTF over the last two weeks, but there might be an easy way to correct it.

He's had the tendency to stay way too deep in the crease lately.

Now there's a couple of things which could explain this- a lack of confidence due to some poor performances, not having faith in our defensemen to clear pucks and bodies out in front of the net (Vancouver's second goal on Saturday, the first goal last night against Minnesota being two good examples), and getting burned when overplaying the puck (Montreal). He's living on the edge right now, and for good reason.

Boucher has never been a guy who's going to come out and challenge shooters like Nabokov- it's just not his style. However, when he was putting up big numbers in November, number 33 was a whole lot more aggressive in attacking the puck carrier. The bread and butter in his repoirtoire is the glove hand. By sitting back on the play he's not forcing shooters to go that side, and instead is letting them pick their shot. The reason his rebound control (#1) has suffered lately is probably a direct correlation.

In reality, this ties in with the defense in front of him. Everyone needs to get better at clearing out people in front of the net, especially with Blake sidelined for the time being.

* I mentioned this in the game thread, but humility knows no bounds- Alexei Semenov has truly made me eat my words (and some of yours I bet) with his improvement this season. He defends his teammates, executes his breakout passes, and hasn't been a defensive liability since the stint at forward earlier in the year. The size he brings to the table is something that the Sharks defense needs going into the playoffs. Add in a healthy Huskins, and the depth at that position is unreal.

* David Pollak has a very informative article up about the game last night, and is a must read during your morning cereal. One thing I'd like to comment on is Todd McLellan restraining full praise for the effort against Minnesota. We touched upon this last weekend (#11), and after reading that we realized why we're not coaching this team. Sweeney Todd's grace with his critique is something we evidently need to work on, as sounding like a goddamn loose cannon probably won't get you very far.

Then again, Ron Wilson leads the franchise in all-time coaching wins. Maybe we do have a point.

* Marc-Edouard Vlasic is the best defensive defenseman this team has, but I could stand to have him play a little more physical. Not in a Douglas Murray "I'm going to watch you take a run at me, dump the puck in, and lay you on your rear" type of way mind you, but in a "stand his ground in front of the net like Rob Blake" kind of way. Take a look at Nolan's 400th goal from last night. Owen, being the sly dog he is, ran a little interference on Vlasic before the goal and knocked him out of position. This left Semenov to defend the slot and two forwards at the same time, which resulted in a goal (some great passing played a big part as well). These are the types of plays that are going to separate the flock come playoff time.

* I was unsure of how I felt following the game last night, but a win's a win. I didn't like how we let Minnesota back into the game, and don't like the fact that they now have the little voice in their head saying, "We can come back from a three goal deficit both on the road and at home against San Jose." It's a fickle thing come playoff time, and Niklas Backstrom is a guy who could steal a game, if not a series. The Wild scare me, but every team does at this point in the year. I'd probably predict a seven game bloodbath with Colorado if forced to make a gut decision.

All of this being said, we found a way to get two points. It's not a perfect product by any stretch of the imagination, but it's sort of foolhardy to expect a night and day change in one game.

A step in the right direction, and a step that needed to be taken. Solid.