I follow a great NFL stats blog called Advanced NFL Stats, that uses live win-probability modeling to determine which of the two teams is most likely to win. This football off-season the author of that blog has started looking at other sports, hockey being one of them. The post on March 9th was his first about modeling hockey games. In the post, he describes the Poisson equation and how to determine the probability of a team scoring or allowing a certain amount of goals, and through that, the possibility of them winning games.  Go ahead and read his post. I'll wait..... OK! So I thought it might be neat to see what the Sharks numbers were...

where x is the average goals over the time period of 60 minutes, k is the particular goal amount in question, and Pr is the percent chance of it happening.

He uses the Boston Bruins as the example team.  Their average goals scored in 60 minutes is 3.3, while they allow 2.2 goals.  After going through the whole process, he comes to the conclusion that they win 60% of their games and tie 15.8% at the end of regulation.  Assuming the team wins in overtime about 50% of the time, then the Bruins chance to win any particular game is 60% plus 7.9%, or 67.9%.  Before today's games, they were at 67 games played and 43 wins, or 64.2%.  Like the Pythagorean Theorem in baseball, the Poisson number shows that the Bruins might be a better team than their record shows.

So what about the Sharks?  I took the Poisson equation using the Sharks goals for (3.26) and goals against (2.45) as of this morning.  Here's the graph. 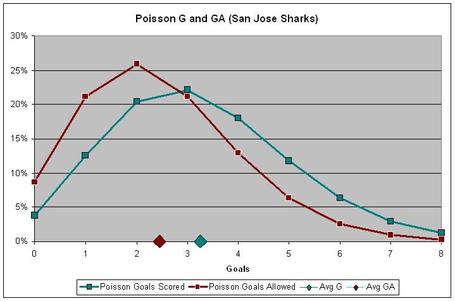 If you're a fan of the team, you like the high red line on the left hand side, and the teal line's peak to be closer to the right.

I charted the 81 different possibilities of zero to eight goals by either team and used the values from the above data to figure out the possibility of that outcome happening.

At the end I've added up the percentages for a win, loss and tie at the end of regulation.

Like with the Bruins, we can assume that the Sharks win half of their overtime games, or 8.1%.  Add that to the win percentage, and you get 62.4%.  As of this morning, the Sharks were at 43 wins in 65 games, or 66.2%.   Based on these numbers, their projection being higher lower than the actual shows the Sharks may not be quite as good as their record shows.

That's it.  The Sharks are performing better than they are expected to based on the amount of goals scored and goals allowed.  Over long enough period of time, I would expect the Sharks to drop closer to their projected numbers, as I would expect the Bruins to rise to theirs.  This doesn't bode well for the Team in Teal, but it's a good thing they still play the games!

Something interesting to do next would be to figure out the numbers compare for each month, or even from the beginning of the season until the slump started.  Did the slump drag down their numbers?  There may not be enough results in the pool to get reliable numbers, but it would still be fun to see nonetheless.

This item was created by a member of this blog's community and is not necessarily endorsed by Fear The Fin or members of its editorial staff.