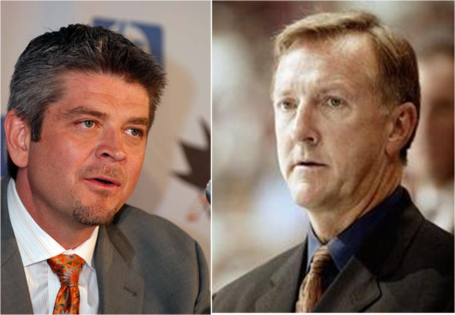 When Ron Wilson was fired last May, the San Jose Sharks lost not only their winningest coach in franchise history, but a skilled sound byte expert as well - one who used the post-game interview to praise his team's efforts as much as he lambasted his men for their failures.

Ronnie's successful successor, Todd McLellan, might strike you as an altogether different sort.  After all, look at Patrick Marleau's improved performance in 2008-09, which had deteriorated last season under Wilson's stone cold watch.

Are the coaches so dissimilar?  Or is it possible they're cut from the same cloth?

Oh - just one small thing.  You have to guess which coach said what.

"Nabby saved the day, and some of the weak spots - some guys should buy him dinner, the guys he bailed out," Sharks coach (blank) said. "A couple of our guys, I wonder if they even know how to play on our end of the rink."

[Note to devoted FTF'ers - this is not an official contest, a la Pursuit of Knowledge.  Simply copy and paste a given quote into the comments section with your answer.  Your prize for correct choices - bragging rights.  No fair cheating!  Oh, and unlike other contests, this one is open to all FTF employees not named Mr. K.]

NOTE = Gaps between quotes signify the beginning of a new quote!

Praising the Team After a Win

"Our team gave an unbelievable effort considering it was our third game in four nights," Sharks coach (blank) said. "We're just focusing on winning our division and finishing ahead of any team in the East."

"They compete for every inch, and I thought we competed for our ice," Sharks coach (blank) said. "It was a bit of an emotional game near the end, but it wasn't quite the kind of games we've been playing, a free-flowing one. It was a little uglier, a little more muck-and-grind along the boards, and I was happy with the way we competed in those areas."

(on Joe Thornton) = "Joe played unbelievable," (blank) said. "He was a force out there. He's physical, making plays. He made a decision he's going to shoot more, that he's going to score and not just look to pass. That will open up some of his playmaking abilities, because now they have to worry about him shooting."

(on Patrick Marleau) = "Our captain stepped up just like he has to do night in and night out," coach (blank) said. "I was very happy to see him elevate his game in the third period."

(on Brian Boucher) =  "I'm really, really happy for Boucher," said Sharks coach (blank). Coming in behind (Evgeni Nabokov) you never know when you're going to get your starts. Bouche stepped up and he was probably our best player tonight and you need that when you're playing ugly so we're real proud of him."

Criticizing the Team After a Loss

"We weren't prepared to play at the level we needed to play at," (blank) said. "We have to talk to the leadership, but they have to be prepared night in and night out to compete and if this happens in the playoffs you have no chance of winning so you better start learning some lessons quickly."

"You have to be mentally ready, and we seem to be content reading our press clippings and seeing whatever our predictions are for where we're going to finish," (blank) said. "One turnover, and we collapse for 10 minutes."

"I thought our big-minute players played pretty well," Sharks coach (blank) said. "I was disappointed in our foot soldiers."

"A couple bonehead plays and boom, boom, just like that, it goes from 1-0 for us to 2-1 for them and it took our energy away," (blank) said. "They're just silly elementary mistakes that maybe you make when you're a little bit tired."

Criticizing the Team After a Win

"Deep down we can't be very satisfied with our defensive effort," San Jose coach (blank) said. "We weren't very happy with the way we played, with the way we turned the puck over."

"We've proved to ourselves if we try to cheat or take shortcuts, it will not work out for us one bit," (blank) said. "The puck was bouncing around a lot out there. It was more like a basketball than a puck. Skilled players want it smooth and fluid. We seemed to be knocking it down a lot. It was a difficult night that way."

Criticizing Players for a Specific Reason

"We've got some guys who should be ashamed at the way they played," Sharks coach (blank) said. "There were four or five guys we count on and they weren't ready to play. On a power play we gave up the puck on a faceoff and that's embarrassing."

"It's funny. When you win some games and you come in to play against teams, they expect you to absolutely run over people," he said. "That's not the case. It's a hard league to win in and other teams are prepared for you."

Self-Assessment Compared to the Other Team

"Just flat out they were better in every situation," (blank) said. "We can come down off of our perch and everybody can look at each other and realize that we've still got some work to do."

"We can't give up, and you can't veer off the plan when they don't go in," coach (blank) said. "Why change? The opportunities are there. You just keep on persevering. Right now our perseverance level is low. We've got to find a way to persevere, that's all."

"Way too many passengers. Still celebrating Christmas. Whatever," (blank) said. "We weren't prepared to play and to be quite honest with you, you could almost see it coming."

"I guess the race from now to the end of the year is important."

"You shouldn't play the way we did in a big game like this," (blank) said. "We had an opportunity to put some distance between ourselves and (team), and we didn't do it. ... It's inexplicable to me not to have the extra passion tonight."

"It was getting a little frustrating, but it didn't affect our play," (blank) added. "We have to use our speed and particularly our size. Tonight, the way we were skating and playing, any team will have trouble down low against us."

PHEW - that's probably enough for now.  Are you confused or unsure?  Does your normally steadfast, trustworthy gut gurgle with anxiety?

Answers will be revealed later today.... if I can just find my cheat sheet....

[P.S. - Feel free to include your own quotes for others to guess on, in the comments.  We DO have to keep ourselves entertained somehow on a 2-game Monday]