Share All sharing options for: Sharks lose... but dramatically! 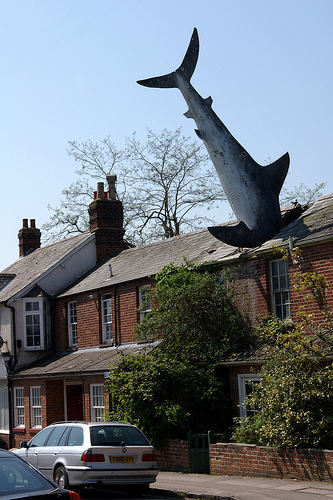 Perhaps it was a fitting end to the evening - the Phoenix Coyotes bookended the night with goals coming within 30 seconds of the start and end of the game.

After almost being routed in the first period, the San Jose Sharks substituted Brian Boucher for Evgeni Nabokov and fought off a 3-goal deficit to tie the game in the third period against the Phoenix Coyotes at the poorly-named-in-this-wintry-economic-climate-NO-wait-it-was-always-the-worst-named-arena-in-the-history-of-modern-sports Jobing.com Arena.  Unfortunately, the tie was broken with 27 seconds left in regulation, when Shane Doan scored a power play goal that was vaguely reminiscent of Ovechkin's highlight reel goal (against Phoenix, oddly enough).

Doan's game-winner was also his fourth point of the evening; teammate Kyle Turris had 4 points (2 goals, 2 assists), while Joe Thornton (2 goals, 1 assist) and Rob Blake (3 assists) each had 3 points for San Jose.

Despite losing in regulation, the Sharks still clinched the Pacific Division tonight thanks to some help in Vancouver - the Canucks downed the Dallas Stars, 4 to 2.

Division banner #4 coming to the HP Pavilion next season - hopefully with at least 2 larger banners in tow.

Join us after the jump for a comprehensive game wrap, as well as VIDEO OF THAT AWESOME FIGHT BETWEEN SHELLEY AND MCGRATTAN.

Oh, and for what it's worth - Happy St. Patrick's Day!  (Image courtesy of Pucked) 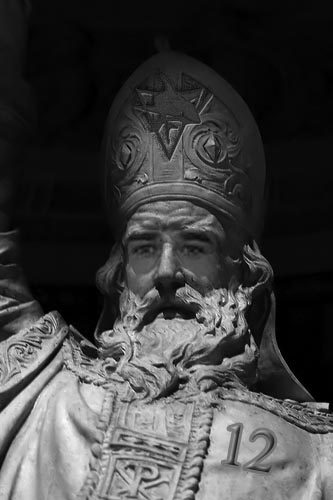 "No teal beer until we get some wins together, dammit!"

Kyle Turris won the opening faceoff against Joe Pavelski, and sent shock waves all the way up to Teal Town (trust me - I felt them) when he scored just 21 seconds later.  Shane Doan sent the puck to the net, where it found Evgeni Nabokov's glove.  Unfortunately for the Sharks, Turris banged home the rebound for the first goal of the night.  Peter Mueller earned the secondary assist.

Matthew Lombardi proved that he left none of his speed in Calgary when he came down to the desert at the trade deadline - he was a formidable adversary while centering the first line with fellow newcomer Scottie Upshall (Philadelphia Flyers)and Danish rookie Mikkel Boedker at his side.

Brad Lukowich leveled Brian McGratton into the neutral zone boards at 6:32 - McGratton was playing in only his 4th game with the Coyotes this season, and first since November 18.  McGrattan responded by hitting Jody Shelley in the neutral zone just 5 seconds later.

At 7:40, Devin Setoguchi had a big open-ice hit on Petr Prucha (fresh from the New York Rangers), which came shortly after Prucha hit Patrick Marleau.  Setoguchi got a little tangled up himself, but looked none the worse for wear.

At 8:07, Joe Pavelski found himself wide open in the slot.  Milan Michalek fed him a pass, and Little Joe took a slap shot that Bryzgalov managed to stop.

Despite being down in the first period, the #3 line of Travis Moen - Marcel Goc - Jonathan Cheechoo truly turned the heat up in the Coyotes' end, sustaining pressure along with the defensive lines (particular Brad Lukowich and Alexei Semenov, but also Marc-Edouard Vlasic and Rob Blake).

At 13:32, Alexei Semenov was called for holding Todd Fedoruk, and the Phoenix Coyotes would take the first man-advantage of the game.  Emphasis on advantage.

Forty-nine seconds after the start of the penalty, Kyle Turris notched his second goal of the evening.  The goal at 15:21 was his second attempt during the power play, as nine seconds earlier his shot rang off Nabokov's post.  A scramble for the puck ensued, and Turris knocked it in off of Danny Boyle.  Phoenix now had a surprising 2-goal lead.  Shane Doan and Dmitri Kalinin earned the assists.

Though it was not entirely his fault, Evgeni Nabokov had let in 2 goals on 6 shots.  That save percentage would hold for the evening, unfortunately... but more on that in a moment.

At 17:59, Daniel Winnik took a cheap shot at Dan Boyle, driving him into the boards and knocking him to the ice cradling his face.  Ten seconds of TOI later, Rob Blake took up the cause for San Jose by challenging Winnik.  No real punches were thrown since the referees intervened earlier than expected, but the message had been sent.

Unfortunately, an interference call at 19:13 on Patrick Marleau (drawn by Mueller) negated the impact of the message.  Thirty-one seconds later, Dmitri Kalinin wristed a shot from the right circle that beat Nabokov on his blocker-side, making it 3-0, Phoenix.  Evgeni Nabokov's save percentage was still 66.6%, as he let in 3 goals on just 9 shots.  Todd McLellan kept Nabokov in net for the final 16 seconds of the period, but Nabby would watch the rest of the game from the bench.  To be fair, the Sharks dismal penalty killing did nothing to help his game.

NOTEWORTHY STAT = Phoenix blocked FOURTEEN of our shots, while we blocked just two.

What did our coach have to say about the start of the game?

“There isn’t a guy in there who should be proud of their first 20 minutes,” Sharks coach Todd McLellan said.

“He wasn’t ready to play, either,” McLellan said of his goalie.

With Brian Boucher in net for the start of the second period, the Sharks would attempt to "pull a Buffalo" and claw back from seemingly insurmountable odds.  Luck didn't seem to be in their favor when Douglas Murray was called for tripping Ken Klee at 2:37.  Fortunately, the 5-on-4 became a even-strength before any further damage could be done to San Jose = Joe Pavelski drew an interference call on Dmitri Kalinin, at 3:16.  The 4-on-4 time frame saw nice stick work from both Joe Thornton and Patrick Marleau, who seemed determined to bring the puck into the offensive zone, come hell or high water.

Perhaps we shouldn't be too surprised - after all, these two have history.

At 6:42, Brad Staubitz decided to do some roughing of his own by taking on fellow winger Brandon Prust.  This tussle was more of a wrestling-match, with each trying to strong-arm the other.  I'd give the slight nod to Prust for that one, though it's probably a draw.... yawn.

A battle ensued following a stopage in play, and San Jose actually benefitted - Keith Yandle was called for slashing Ryane Clowe at 7:50, and San Jose went on their first legitimate power play of the evening.

Joe Thornton made quick work closing the scoreboard gap - 10 seconds is all it took for him to go around Bryzgalov's net and wrist the puck top shelf from the faceoff circle.  It took 15 shots on goal, and a man-advantage, but San Jose had finally cracked Bryzgalov (he's a tough egg).  Brownie points to Captain Patrick Marleau for holding back Kurt Sauer, allowing Thornton's shot to travel uninhibited.  Jonathan Cheechoo and Rob Blake earned the assists.

San Jose would go on to miss some prime scoring chances on botched passes to the slot, though Pavelski and Marleau would get the puck on net on separate individual efforts.  At 16:09, Ryane Clowe and Travis Moen sandwiched Daniel Winnik at the boards in a great check.  Another battle would ensue behind the net, with Shelley, Murray, and Semenov dishing out blows to their Phoenix counterparts, at 16:44.

Small criticism - in pursuing a check, the Sharks seem to occasionally forget that the puck is live.  Such an incident happened at 18:21, when Brad Lukowich slammed Doan into the boards instead of getting the puck - it was retrieved instead by a Coyote.

The Sharks would close the period on the power play, as Ken Klee was called for tripping at 19:29.

San Jose charged back into action in the final frame, and despite not converting on the rest of the man-advantage, they worked Bryzgalov with three shots on goal, to say nothing of the blocked or missed shots.

Back-and-forth even-strength action eventually turned into a 3-on-2 rush for San Jose, spearheaded by Rob Blake.  His work paid off, as Jonathan Cheechoo put a shot to the net, before Joe Thornton buried the rebound from the left circle, at 4:05.

Sometimes it's the small plays that go unnoticed - fortunately, Travis Moen's small play was the primary assist.  He managed to tap the puck to Thornton after Cheechoo's shot; without that little play, the Sharks wouldn't have cut the Phoenix lead to 1 goal.

The fun was not over = Patrick Marleau would tie the game at 8:20, when Joe Thornton successfully fought off Ilya Bryzgalov for the puck at the crease, and sent it to the Captain in the slot.  The backhanded shot went in off a diving Zbynek Michalek (aka Milan's older brother).  Rob Blake earned the secondary assist (his third assist of the night).

Here are some select highlights from the remainder of the game, up until 19:27 =

Douglas Murray lets a great shot rip from the left circle at 12:48 - he really (ahem) "cranked that shaft."

A weary Phoenix is called for icing with about a minute left in regulation... By the looks of it, one would think the San Jose Sharks mistook the Coyotes' red jerseys for blood in the water... and you know how sharks get when blood enters the water.

What's that you say?  It's all a myth?  Hmmm... well that might help to explain what followed shortly after.

Jonathan Cheechoo was called for interfering with Petr Prucha right off the faceoff, at 19:27 - and the sky began to fall.  If the Sharks managed to last 33 seconds to close out regulation, they would still have to fend off a 4-on-3 in overtime.

At least Shane Doan didn't keep us in suspense too long - it took just 5 seconds for him to ruin our hopes of an epic comeback, with his backhand shot from 10 feet away, which he managed while Rob Blake clung to him.

Final score = Sharks - 3, Coyotes - 4.  The Coyotes, who are eliminated from playoff contention, had not won at home since the All-Star Break.  Lovely time to start...

With Detroit's victory over Philadelphia today, the Sharks fall 3 points behind the Red Wings, with 2 games in hand.  Detroit's next game is in (uh oh...) Atlanta, on Friday.

The Sharks host the Nashville Predators on Thursday to start a three-games-in-four-nights homestand.