The Montreal Adventures of Mr. K.

Share All sharing options for: The Montreal Adventures of Mr. K. 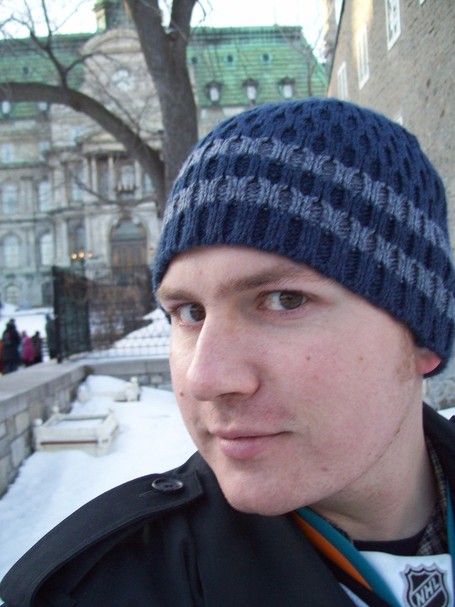 Road warrior that he is, Fear the Fin’s own Dustin (aka Mr. K.) made his way this weekend from sunny California to the frigid climes of Montreal, Quebec, to see his beloved 3-time Pacific Division champions, the San Jose Sharks, take on the 24-time <<Coupe Stanley>> winners, the Montreal Canadiens, for the Habs’ 3,000th home game.  Though he regrets the result of the game (a 2-3 loss for Team Teal), he does not regret traveling so far for so short a time.  He shall now explain to you why that is – completely in the third person, and with only minimal hyperbole.

After taking the red-eye from SFO to JFK following a long day of work (itself begun with only 2 hours of sleep), Mr. K. waited at the New York airport for his connecting flight to Burlington, Vermont, which was delayed a great deal.  A fiscally responsible traveler (!), Mr. K. (hereafter referred to as "Our Hero") shrewdly observed that a roundtrip ticket to Burlington – less than 2 hours from Montreal – was over $300 cheaper than flying directly into the Habs’ headquarters.  However, with the clock ticking down before his 7pm game, and a delayed flight out of JFK before him, Our Hero began to worry somewhat.  Fortunately, he arrived in Vermont only 35 minutes behind schedule, despite departing 90 minutes after scheduled.  Kudos to the brave pilots for traveling at Mach3. 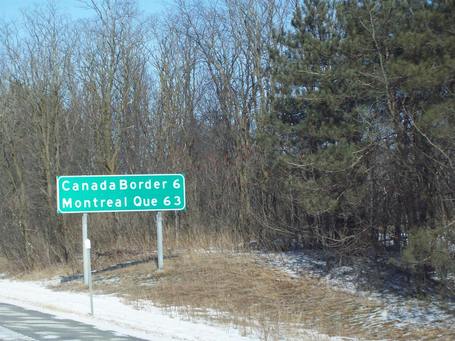 To get to Montreal, Our Hero required a rental vehicle – which was reluctantly granted him for the low low price of $37, in spite of his criminal driving record in 33 countries.  He then blazed a trail on I-89, melting accumulated roadside snow in his wake, en route to the Quebec border.  At the border, though he had a weapon stockpile and drug cache (merci pour le "hookup," Claude), Our Hero negotiated terms in French with the Canadian agent, who agreed not to search the vehicle if Our Hero bestowed upon him his extra hockey ticket (valued at $50,000 Canadian, or roughly $150 USD). 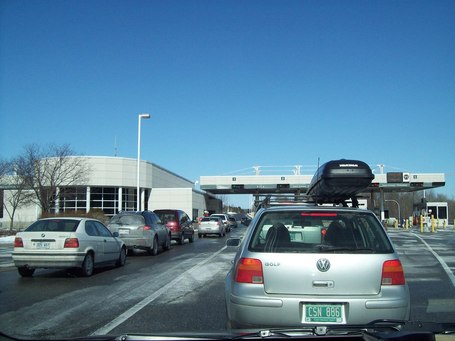 Once across the border into The Hallowed Land of the Habs, Our Hero piloted his contraband-laden vehicle towards the Isle of Montreal at 250 kilometers per hour, ignoring the French-only roadsides, whose sole purpose was to piss off the 70% of Canadians that wouldn’t be able understand them. 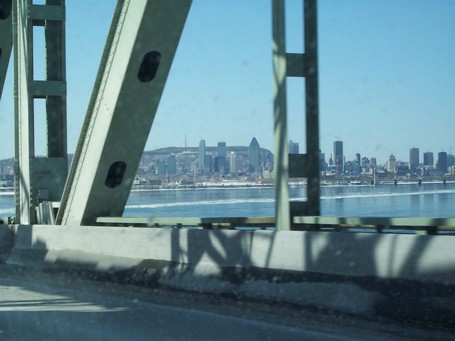 After crossing the bridge over the half-frozen St. Lawrence, Our Hero dropped off his weapons and drugs on Rue Rene-Lesvesque and McGill University, respectively, which in turn paid for his plush digs at the Hotel Le Contlie on Rue Sherbrooke, where he went next.  Outside the hotel, Our Hero considered getting a cold one at the ice bar... 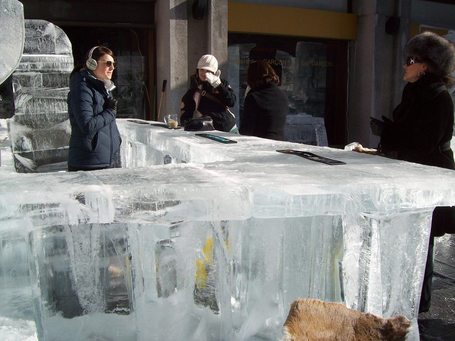 Sleep-deprived and malnourished, Our Hero was nevertheless pumped for the day at hand, in 17 degree Fahrenheit Montreal.

Wearing four layers of clothing, including his Sharks chandail, Our (easily chilled) Hero slipped and slid his way across the icy streets (not unlike opposing coaches crossing the ice to the bench) towards Le Metro, to access Vieux (Old) Montreal. 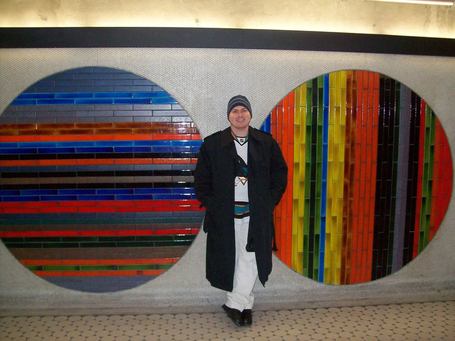 Once there, he apologized to God for his contraband smuggling ways at the Basilica, before exploring the various festive side streets in the oldest part of the city. 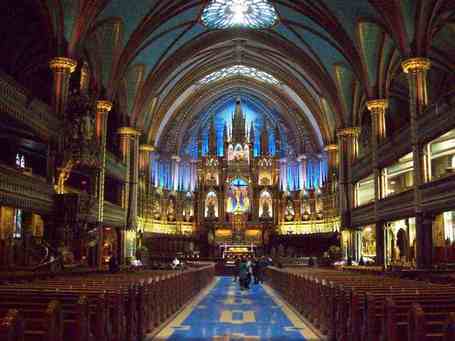 Our Hero managed to capture a charming episode on video, which illustrates what one can do in a city draped in permafrost.

Our Hero then made his way towards the river, where an outdoor skating rink was set up for the masses.  Determined to show that Californians could skate with the best of them, Our Hero proudly pirouetted his way across the ice while boasting his non-Habs jersey.  Montreal denizens were stunned at the out-of-towner’s presence, not to mention his skill with the blades.  Our Hero never once fell, he might add. 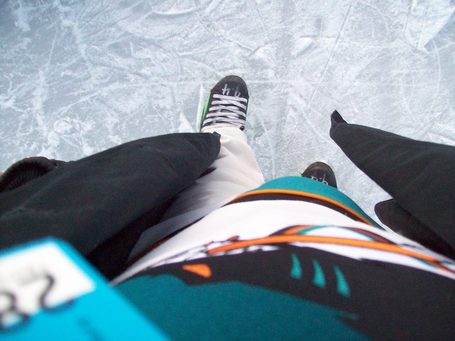 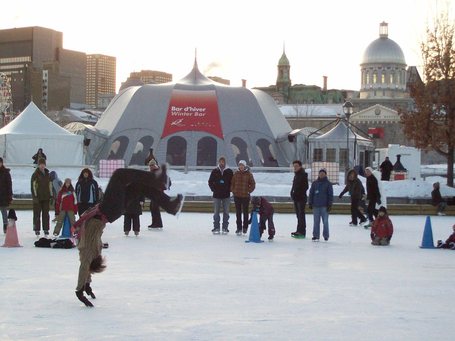 With only 45 minutes before practice was to begin, Our Hero took Le Metro towards Le Centre Bell (formerly the Molson Centre). 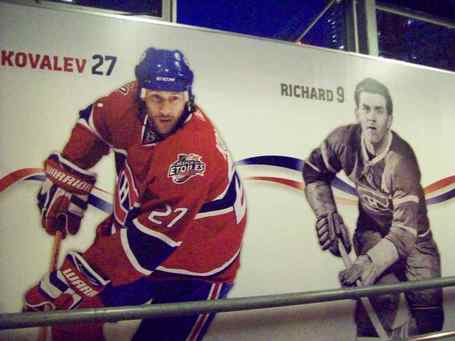 Upon entering the facility (which has yet to see the Canadiens win a Stanley Cup), Our Hero was greeted with a loud, "Sharks sucks."  He noted the subject-verb disagreement, accounted it to the man’s poor English instruction, and congregated with a teal group nearby. 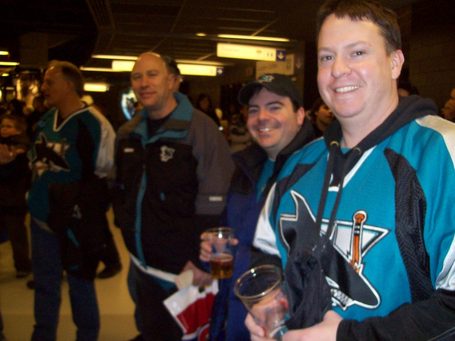 Our Hero then was forced to seduce one of the female agents guarding the 100 level seats, in order to gain access to the glass for practice, which was not permitted to anyone but ticket holders – a curious novelty for the Sharks fan, given that every other arena he had been to allowed universal access to the glass.

Double-crossed by the vixen-agent, Our Hero found himself on the Habs’ side during practice.  Our Hero was angered by this betrayal, since he could not give his covert messages to Brian Boucher and team.  He made use of his time by surreptitiously photographing the Canadiens, for future missions. 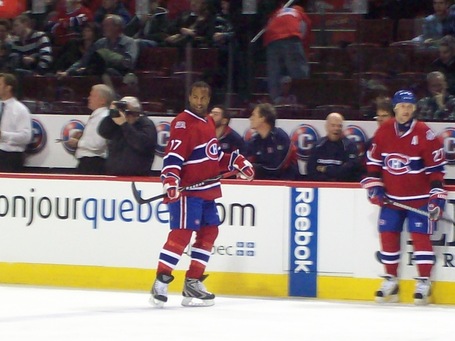 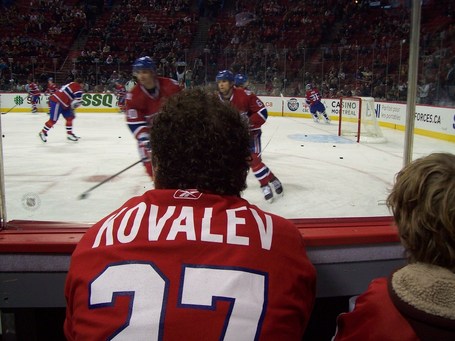 Once at his 300-level seat, Our Hero grabbed both a Molson beer and a hot dog, and let his guard down for a second by not checking for poison.  Fortunately, Our Hero’s developed immunity saved him from a painful demise, and thus he was able to savor the Canadian brew as well as one of the best NHL hot dogs around.

And then the game began.  The Montreal Canadiens came onto the ice between a pair of young hockey acolytes, baring the standards of the Habs.  The Cult of the Canadiens was in full effect, and Our Hero had infiltrated their pagan headquarters. 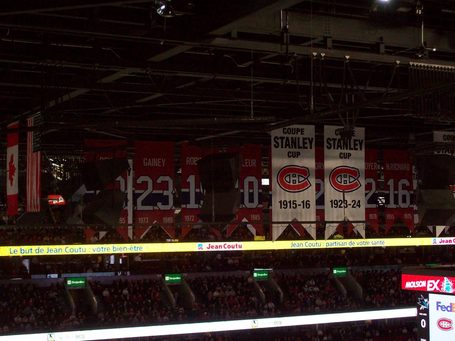 As the Canadiens surprisingly built a 3-0 lead in the first period, Our Hero was serenaded with two distinct chants: "O-lay, o-lay… O-LAY, olayolayolay…" and "Boo-shaaaaaay."  He also had the misfortune to sit next to Patrice Brisebois’ male lover, who moaned for his companion with many a "Patriiiice!  C’mon Patriiiiice!" in francophied English. 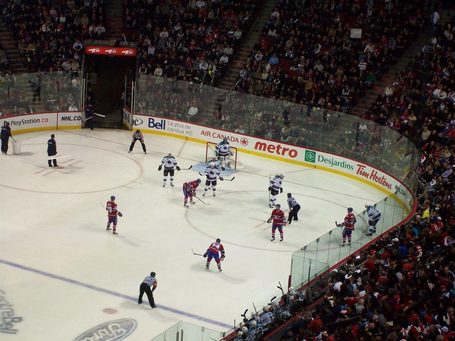 Our Hero received an upbeat phone call at the first intermission from secret agent ang6666, who sadly reported that not all was well on the home front.  The faith would be kept, however, much to Our Hero’s encouragement.

The second period began with a Sharks comeback, which allowed Our Hero to flaunt his signed Pavelski jersey to the stands behind him, as well as shout "Haaaaaaa-laaaaaak" in defiance.  The Cult of the Canadiens was not amused, and made plans for a satanic sacrifice at the next intermission. 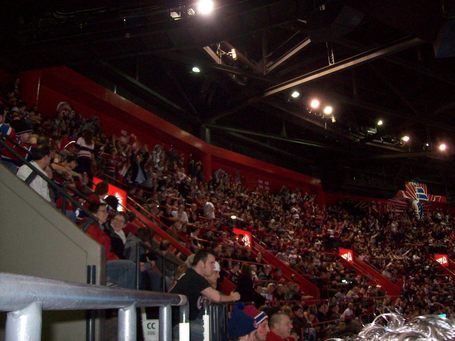 Speaking of the second intermission, Our Hero was contacted by one Lurker Shark, and the two exchanged greetings and words of support.

Unfortunately, Our Hero’s failure to deliver the covert messages to Brian Boucher cost the Sharks the game.  His secondary mission (poisoning Jaroslav Halak’s Gatorade) likewise was unsuccessful.  Considering hari-kari, Our Hero slipped and slid his way back to his hotel, where he retired for the evening, following a notice that he sent to his FTF bureau, accepting the blame for the loss.

On Sunday morning, Our Hero awoke to colder temperatures than Saturday – and stayed in bed accordingly.  He had until 2:30pm to speed back into the U.S. to rendez-vous with his private jet out of Burlington, and thus he needed to move quickly to spy out as much of the city as possible.

He began by walking two blocks to McGill University, aka "Canada’s Harvard," which was devoid of human activity in preparation for a busy week ahead for its soon-to-be-drug-addled students. 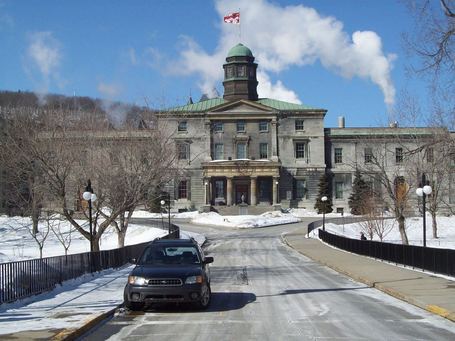 Our Hero then retraced his frozen steps to the Musée des Beaux-Arts, home to Canadian and international art (including a Rembrandt portrait, a very early Van Gogh painting, and a fantastic African art gallery sponsored by Cirque du Soleil). 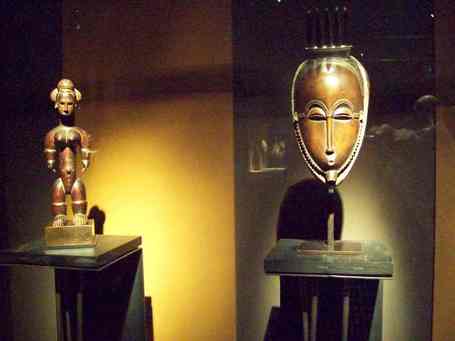 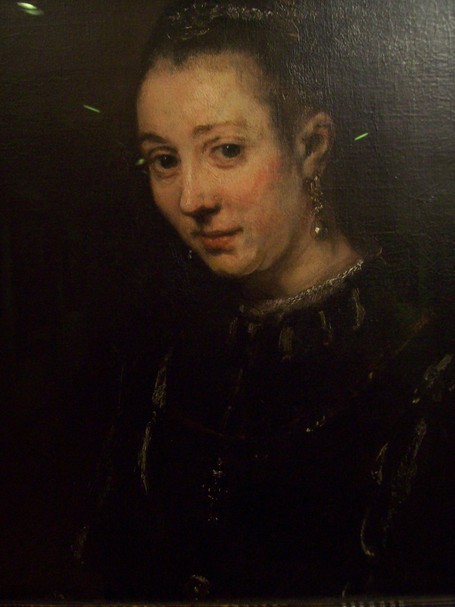 Though Our Hero’s mind was full, his belly was not, so he made his way to a local slop shop for Quebec’s culinary showpiece – poutine – stopping en route to buy contraband Cuban cigars. 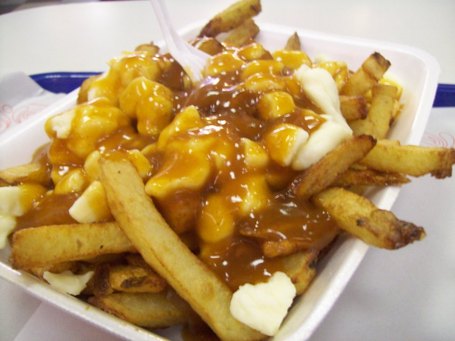 Ah, poutine, essentially French fries drenched in beef gravy and cheese curds – Our Hero’s refined sense of taste was assaulted on the first bite, before his tongue acclimatized to the situation.

To walk off his 3,000 calorie intake, Our Hero made his way below street-level to Montreal’s Underground City – a 5 square kilometer maze of shops and galleries, as well as apartments.  Our Hero despises shopping malls, and did not last long underground, despite being impressed that such a massive subterranean complex could exist.

Finally, after recovering his vehicle, Our Hero made his way up Mont-Royal, for which Montreal (Royal Mountain) is named.  From here, Our Hero spied out the ugly Olympic Stadium, and saw the boundaries of the Isle of Montreal formed by the St. Lawrence River. 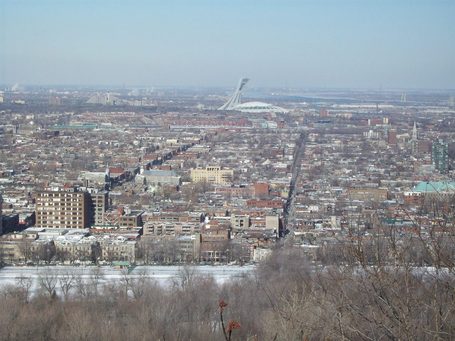 2:30 had arrived, and Our Hero sped his way to the U.S. border, where he was accosted by an over-zealous border agent who refused to believe that Our Hero came for a hockey game, when his passport contained stamps from such unusual countries as Syria, Lebanon, and the Philippines.  Of course, Our Hero made no mention of the weapon and drug transaction described herein – or the Cuban cigars which he had on his person.
After a ten minute delay, Our Hero continued his journey to Burlington, where he walked on the frozen Lake Champlain before making his way to his flight. 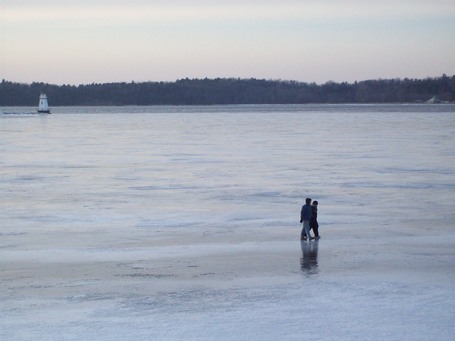 The hour flight to Philadelphia was uneventful except for a whiteout upon arriving in the City of Brotherly Love – which delayed Our Hero’s connecting flight substantially.  Once in air, Our Normally Fearless Hero was white-knuckled due to severe turbulence – but was simply happy to be headed home to Teal Town, where his next mission would take place.
THE END...?