Greatest Sharks: In Our Defense...

Share All sharing options for: Greatest Sharks: In Our Defense... 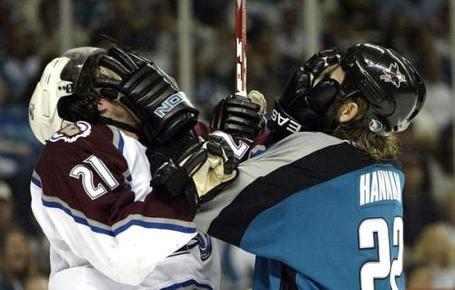 Greatest Sharks, in yo face!

Well, it's about that time again, eh? After much ado (thankfully less than with the forwards), the defensemen for the "Greatest Sharks" team have been chosen. Sandis Ozolinsh and Kyle McLaren were the first two deserving selections announced last week. After the second round of voting, four more players have been added: Scott Hannan, Mike Rathje, Brad Stuart and Bryan Marchment.

Skate backwards with FTF as we decide on the lines, and give our input on the selections.

McLaren and Ozolinsh were the first two players selected, and in my honest opinion, the most ideal pairing. Ozolinsh was never really a pure defensemen, as he operated more as a fourth forward for much of his career. He did, though, excel in this role. In fact, Ozolinsh was a seven time all-star and one of the most prominent "offensive defensemen" of the past two decades. However, his offensive skill set occasionally came at the expense of his defensive play.  Because of his "defensive lapses", he'd be best paired with a player who was more focused on the defensive end.

McLaren is that player. Yeah, we could have chosen Hannan, Rathje, or even Marchment to play the part. But McLaren was something special. Over his five seasons with the Sharks, McLaren showed big hit us big hit after big hit after big hit. His hip checks really were something to behold; he protected his team's blue line like few could. I always thought that McLaren's hits did more than just demoralize the recipient... he could really change the momentum of a game. He was slowed toward the end of his career by injuries, but he was a skilled, fluid skater who could catch up if need be. He's the yin to Ozolinsh's yang, and an elite pairing defender.

I've heard some dissenting views on Scott Hannan. Although some think he was overrated, I tend to disagree. Hannan was one of the better defenders the Sharks have ever had. I can't speak to his issues as a member of the Avalanche, but his time with the Sharks was nothing short of impressive. To me, he'll always be the Hannan who shut down the Av's in the 2003-2004 post season. He's fallen off a bit, and he's had his struggles in Colorado. But he's still a classy guy and a welcome addition to this team.

Stuart, like Ozolinsh, was billed as a defender with a boatload of offensive skills. He never quite lived up to the hype of being a top five pick, but he was still a talented player and offensive threat from the blue line. The combo of Stuart and Hannan is similar to the combo of Ozolinsh and McLaren, but neither of the second line players are as far to the extreme as their first line counterpart.

One of the main reasons that I enjoy these votes is the smack talk in the comments section. Rathje probably doesn't, because he caught more flak than any other nominee. But he used to get his hair cut at the same barber as me, and the 15 year old me thought he was pretty cool.

All kidding aside, Rathje was one of the players most affected by the NHL rule changes. His style of play wasn't really suited to the new NHL; he was often a victim of the increased speed of the game. However, Rathje was still a pretty decent defenseman, and besides his delusions of grandeur (contract holdout, really?), he was a good Shark. He'll probably be one of the first players to be scratched from the team (once Vlassic, Boyle, or Murray are eligible), but he's a welcome addition to the squad as constructed.
An then there's Marchment. Oh Marchment. You shit-disturber. He's a good addition to the team, due to the fact that he'd function as the primary enforcer. However, he's sort of a liability. As pointed out in the player analysis, Marchment averaged more than two minutes in the box per game. He's probably next to go after Rathje, but c'est la vi.

So, there are the skaters. All in all, I'm pretty pleased with the team. The defense is admittedly shallow; the 5th and 6th spots are interchangeable with almost all of the other nominees (sans Jason Moore). But, the team is a process. As stated above, there are a few players in the pipeline that could leap frog Marchment or Rathje in the near future. We'll cross that bridge when we come to it.

But fans of democracy, stay tuned. There's one vote left. Although the vote for goaltenders in somewhat of a formality, join us in our futile quest sometime next week.