Sharks force overtime, lose to Hawks in the shootout

Share All sharing options for: Sharks force overtime, lose to Hawks in the shootout 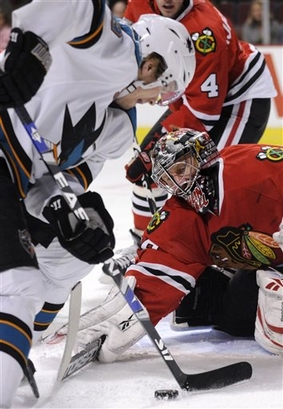 Down at one point by three goals, the San Jose Sharks crawled back to secure an overtime point, before falling in the shootout to the Chicago Blackhawks, 5 to 6.

The OTL puts San Jose back atop the NHL for the time being (hey, if Detroit's official website can consider their now-obsolete position newsworthy, so can we).

In other news, Detroit fans found themselves in the awkward position of actually rooting FOR Chicago tonight.  Their reward was a 3-point game - ha!

Devin Setoguchi had 2 goals, while Jeremy Roenick had an assist in his return to the Sharks lineup - appropriately enough against his first NHL team, in what could very well be his final visit to Chicago as a player.  For Chicago, Andrew Ladd had 2 goals, and Dave Bolland had 3 assists.

The Sharks were without Captain Patrick Marleau, who welcomed his second son into the world this morning.  He will return to the club for their trip to Nashville tomorrow.

Period-by-period breakdown after the jump.

Jonathan Toews won the opening faceoff against Joe Pavelski, and 67 seconds later the Chicago Blackhawks got on the scoreboard.  Brent Seabrook received a pass at the point from behind the net and slapped it on goal; Evgeni Nabokov made the save before Dave Bolland fired the rebound off the post.  Unfortunately for the Sharks, Martin Havlat found the second rebound and wristed it in while stumbling near the right circle to make it 1-0 Chicago, at 1:07.

Not long after, Adam Burish was called for hooking Douglas Murray, and San Jose would go on the man advantage, at 2:33.  The Sharks never once left the offensive zone - and with 14 seconds left in the power play, the Sharks would convert to tie the game.  Devin "That's Right, I'm The Gooch" Setoguchi rifled a shot from the point, and San Jose tied the game at 4:19 on their fifth power play shot.  Christian Ehrhoff and Dan Boyle earned the assists on Setoguchi's 28th goal of the year.

Chicago would keep up the pressure, working the Sharks in the corners and at the boards.  Jonathan Toews had a breakaway that was denied, and Nabby made two quick saves on Patrick Kane and Hjalmarsson.  However, the Hawks would take the lead yet again courtesy of Dustin "HAHAHA I STOLE MR. K.'S FIRST NAME" Byfuglien, who made the most of San Jose's poor line change to seize control and get the puck on goal.  Nabokov had a piece of Buff-Lynn's wrister, but the puck still found the back of the net, at 8:43.  Cam Barker assisted.

With three goals in less than 9 minutes of play, it seemed inevitable that there would be another one before long.  In fact, it took just 61 seconds - Andrew Ladd made it 3-1 Chicago when he scored thanks to Alexei Semenov's miscue at the corner, which allowed the puck to travel to the slot, from which Ladd banged it home.  Havlat and Bolland assisted, at 9:44.   Similarly to the game in Phoenix, Nabokov had allowed 3 goals on 9 shots.

The injury bug made a cameo appearance by biting both Douglas Murray and Jonathan Cheechoo, the latter of whom seemed to tweak his ankle.  Both men reappeared on the ice before Mr. K.'s elevated blood pressure killed him.

New Blackhawk Samuel Pahlsson had a takeaway that allowed Kris Versteeg to storm the Sharks' net.  Simultaneously, Ryan Vesce was called for interference (drawn by Jonathan Toews), at 16:57.  It would be Vesce's first NHL penalty.

Chicago would have a rough go of the man advantage - first they were called for icing, and then Setoguchi and Travis Moen developed a shorthanded 2-on-1, which was broken up by a nice stick check from the sprawled-out Dustin Byfuglien.  Though Chicago was unable to convert, they kept San Jose from getting back on the scoreboard for the rest of the period.

Shots on goal for the period - 9 to 14, Chicago.  Hits = 8-11, Chicago (five by Seabrook alone).  Chicago blocked 5 of San Jose's shots, while San Jose blocked 3.  Setoguchi had the only SJ takeaway, while 3 Hawks combined for 4 (Pahlsson had a pair).  Cheechoo, Thornton, and McGinn were each a minus-2.

The Sharks began the period under duress, unable to dictate the play in their defensive zone.  This forced Nabokov to play the puck to Dan Boyle, who went in for it while slightly holding Kris Versteeg, at 1:31.  Chicago wouldn't get off any shots during their second power play - a merciful thing for the Sharks.

Mercy was not in the cards for the Blackhawks, however - Jonathan Toews extended Chicago's lead by one at 8:27.  Cam Barker deserves full credit, as it was his hard shot from the blue line that got on net, but as the puck went in off of Toews' leg (as well as Alexei Semenov's stick), the Chicago captain earned his 30th goal of the season.  Patrick Sharp assisted along with Barker.

The Sharks narrowed the gap back to 2 just 15 seconds later, when Jamie McGinn had a similar goal to Barker's - his shot from the left boards, which would have gone wide, went past Nikolai Khabibulin after being kicked in by defenseman Niklas Hjalmarsson.  Travis Moen and Douglas Murray earned the assists.

In a save reminiscent of his denial of Owen Nolan in the WCQF, Evgeni Nabokov robbed Dustin Byfuglien of his second goal of the night, at 11:09.  The Chicago fans behind Nabby stood up in premature celebration (they have a pill for that now) - even the TV scoreboard flicked to 5-2 momentarily.

Well, San Jose fed off of Nabby's newfound mojo, and got their second of the night just 28 seconds later, at 11:37.  Marc-Edouard Vlasic, evidently jealous of all the fluke goals, added one of his own that went in off of either Brent Seabrook or Jonathan Cheechoo.  Regardless, the Sharks had narrowed the ever-widening gap by a goal.  Cheechoo and Thornton earned the assists.

Interestingly, Chicago coach Joel Quenneville called a timeout, sickened as he was by the Sharks' quick goals.

Three minutes later, a flurry of activity in front of the Bulin Wall's net prompted Duncan Keith to resort to subterfuge - simply put, he deliberately removed the net from its foundation.  He got away with it, sneaky fox.

The period would wind down despite some excellent plays (including a great save by Nabokov on Aaron Johnson), and the score would remain 4-2, Chicago.

Mr. K. needed to pee and eat, in that order - so he missed the first few minutes of the third period, though he was back in time to see Andrew Ladd tip in his second goal of the evening, at 5:35, making it 5-3, Chicago.  Bolland and Hjalmarsson assisted; it was Bolland's third assist of the night.  The assist was Hjalmarsson's first point of the season.

Former Blackhawk Jeremy Roenick demonstrated that he still has the moves by weaving his way through neutral ice into the Hawks end, before getting off a shot.  Just a few moments later, the Sharks would go on their second power play of the evening, when Duncan "Net Nudger" Keith earned a delay of game penalty by backhanding the puck from the crease to the stands, at 9:28.

Some nifty maneuvers came from both teams thereafter - Joe Pavelski showed his stick-handling and puck control while charging Khabibulin, while Martin Havlat skated a giant loop from the point around Nabokov's net, looking for a shot.

It would be Devin "That's Right, I'm Still The Gooch" Setoguchi who had the best highlight reel maneuver of them all, however - speeding past Brian Campbell and scoring on his breakaway for his 29th goal of the year, and second of the evening.  Pavelski and Milan Michalek assisted, at 14:53.  The Sharks trailed by one with about 5 minutes remaining in regulation.

Leave it to Joe Thornton to make the comeback virtually complete - he singlehandedly manhandled Brent Seabrook, and fought his way through the right circle to wrist it past Khabibulin at 17:52, tying the game at 5.  Jeremy Roenick and Marc-Edouard Vlasic assisted - it was Roenick's eighth assist of the season (702nd career).

The final two minutes of regulation wound down, and the Sharks earned a very necessary point, putting them back atop the NHL.

Two shots each = Bolland, Cheechoo, Michalek, and Hjalmarsson, in that order.  Scary opportunites for both teams after a slow start by San Jose.  The teams split the only two faceoffs.  Joe Thornton hit Martin Havlat for the only hit of sudden death.

Patrick Kane scored on the backhand, Joe Pavelski hit the crossbar, Jonathan Toews wristed one past Nabby, and Jeremy Roenick's wrister was blocked.  Chicago wins 6-5 in the crapshoot, I mean shootout.