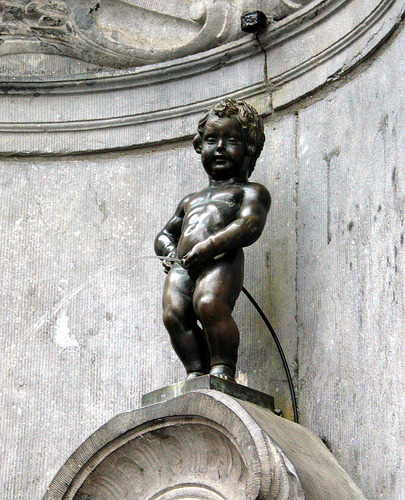 Following a 2-2-0 road trip in which the San Jose Sharks put up no more than 2 goals per game, Team Teal returned home with two days rest to face the struggling Dallas Stars.  Despite going 0-5 in their last five games, as well as losing all four of the teams’ meetings before tonight, the Stars drastically outshot the Sharks 21-9 in the first 30 minutes of the game, and benefited from the absence of San Jose’s Joe Pavelski after the first frame.

Pavelski was mysteriously dealt a game misconduct for “head-butting” in the waning seconds of the period; simply put, nothing of the sort took place (trust us on this one).  The call was fairly ironic, considering that Pavelski  was honored before the game as the Seagate Player of the Month.  Counting a hooking and high sticking call against him earlier in the game, Pavelski actually more than doubled his current PIM, going from 18 to 37 in less than 20 minutes.  Way to piss on Madame Byng, Little Joe.

Although the Sharks were indeed at a disadvantage without Pavelski, Mike Grier, Jeremy Roenick, and Marcel Goc (the latter three due to various injuries), they failed to shake Marty Turco at even-strength, while Dallas scored three such goals on Brian Boucher - who was once again in net for the ailing Evgeni Nabokov (flu).

Thus, the San Jose Sharks lost back-to-back games in regulation for the first time this season.

For those wondering about trade deadline stuff, we offer four words = Pepe a healthy scratch.

After winning the opening faceoff, the Sharks kept the Stars busy against the boards, despite trouble initially maintaining pressure in the Stars’ end.  San Jose failed to capitalize when Turco was down at his net, before then losing his goal stick.  Lucky break for Marty…

San Jose took the first penalty of a sin-bin-evening, when Brad “Recalled from Worcester” Staubitz was called for holding Matt Niskanen at 2:57.  Fresh off of his one-game suspension, Steve Ott applied the pressure, supplying the first two shots on goal for Dallas (and the first of his 5 for the evening).  However, Boucher kept the Sharks alive with key saves, including one on Mike Modano to end the man advantage.

Less than 30 seconds after his minor penalty expired, Staubitz was back in the box for fighting Krys Barch.  The bout was fairly even-handed, though one could say that Barch had the slight edge.  Look back on Fear the Fin for another edition of Dropping the Gloves, coming soon courtesy of idunno723.

Dallas would get on the board first, in a worrisome trend for the Sharks, who have failed to get first blood for four straight games.  James Neal scored on Dallas’ sixth shot, at 6:35.  Brian Boucher had played the puck to the right boards, when it came back to Fabian Brunnstrom, who set up the play to Brian Sutherby from behind the net.  Sutherby’s shot was blocked, partially due to the swarm of Sharks around him… leaving James Neal wide open to receive the puck that came his way while he prowled at the left circle.  Plus-ones = Neal, Sutherby, Brunnstrom, Niskanen and Sydor.  Minus-ones = Blake, Cheechoo, Kaspar, Lukowich, and Plihal.

Down 1-0 and being outshot 7-2, the Sharks would get an opportunity to even the affair when Nicklas Grossman was called for holding Patrick Marleau at 7:49.  It probably should have been a tripping call, but tomato, tomatoe…  At any rate, despite the initial threat of a shorthanded rush and shot from Mike Modano, Christian Ehrhoff managed to send the puck back in, allowing Joe Thornton to set up a play, before executing it himself.  Jumbo tipped-in a shot from Christian Ehrhoff, with Devin Setoguchi earning the secondary assist at 9:07.  It was only the third shot for San Jose.  On ice for San Jose = Thornton, Ehrhoff, Setoguchi, Marleau and Boyle.  On ice for Dallas = Mike Modano, Loui Eriksson, Stephane Robidas, and Trevor Daley.

With the game tied, the Sharks pressured Marty Turco’s net at the 13:45 mark, before double minor penalties were assessed to both Joe Pavelski for hooking and high sticking, as well as Mike Ribeiro for high sticking.  Five-on-five play continued starting at 14:08, but the Stars went on the man advantage 25 seconds later when Tomas Plihal took a stupid holding penalty.  The ensuing Dallas power play featured sustained pressure from the Stars, and while Boucher denied a couple shots, the Stars kept in the Sharks’ end even after the penalty expired.

A game-defining event took place with seconds left in the period – during a scrum in Dallas’ end, Joe Pavelski was cited for head-butting by referee Kelly Sutherland.  Extensive video review did not show anything that looked remotely like head-butting, but regardless, Pavelski was thrown out of the game with a game misconduct and a match penalty.  Darryl Sydor was given a 2 minute roughing minor for his part in the scrum, but the damage was certainly lopsided – the Sharks had lost a key component in their power play and penalty kill, as well as a faceoff competitor that anchored the second line.

Though the stats are not in front of me, I feel fairly certain that this was a record night in PIM for Little Joe – especially considering that his 19 minutes for the evening trumped his accumulated 18 for the season.

Four-on-four play opened the second period, and Boucher made important stops on both Niskanen and Erkisson, before Turco dove out to stop a wild between-the-legs trick shot from Patrick Marleau, for the Sharks’ first shot of the period.

The Sharks would have to kill off about 2:40 worth of the 5-on-4, but Rob Blake was called for cross-checking at 2:27, allowing Dallas to go on the 2-man advantage for a full two minutes.  San Jose appeared close to thwarting the Stars’ attempt to score while on the 5-on-3, but sadly, the Sharks permitted Mike Modano to one-time a shot from the right circle past Boucher, at 4:24, with just 3 seconds left of the two-man advantage.  The goal was the 19th shot of the evening for Dallas, as they were currently tripling San Jose’s output, 19 to 6.  Modano’s goal was assisted by Mike Ribeiro and Marty Turco (!).  On the ice for Dallas = Modano, Ribeiro, Neal, Brunnstrom, and Grossman.  On the ice for San Jose = Plihal, Murray and Vlasic.

Little did the Sharks know, but the goal would stand up as the game-winner.

The Sharks would go on a power play of their own at 6:05, when Grossman cross-checked Joe Thornton.  However, the ensuing man-advantage was easily one of the Sharks’ lesser efforts, as the Stars repeatedly cleared the puck, denying San Jose any scoring opportunities.  They also allowed a shorthanded scoring opportunity to Mike Ribeiro.  For the record, the Sharks’ number one line was on the ice with Ehrhoff and Boyle.

At the halfway point in the game, the Sharks were being outshot 21-9, and were behind on the scoreboard 2-1.  To make matters worse, the Sharks would need to kill off another penalty, this time to Jody Shelley for unsportsmanlike conduct, at 10:14.  They managed to do this while limiting the Stars to one scoring opportunity.  Once Jody Shelley was out of the box, he apparently took a run at a linesman, checking him into the boards.  The Shark Tank roared its approval.

Well, a period marked by power plays would end with one – this time to Dallas, as Matt Niskanen took a holding penalty at 18:36.  Despite seeing a shot from Jonathan Cheechoo (his only one of the night), the 84 seconds did not see a significant teal effort, and thus the score remained 2-1.

Early on in both the man-advantage and in even-strength play, the Sharks had huge opportunities to not only tie the game, but take the lead entirely.  The waning seconds of the 5-on-4 saw a “How did it not go in?!?” moment from the #1 line of Marleau-Thornton-Setoguchi, before Marleau had a backhand shot from 8 feet out that was saved by Turco.

Unfortunately, the Stars would pad their lead when Brian Sutherby scored at 6:32.  After the winning the puck battle behind Boucher’s net, Sutherby snuck in to Boosh’s right, and backhanded the puck in, with Ehrhoff just standing by.  The assists went to Fabian Brunnstrom and Matt Niskanen.  Score = 3-1, Dallas.  Shots = 26-20, Dallas.  Plus-ones = Sutherby, Brunnstrom, Niskanen, Neal, and Sydor.  Minus-ones = Setoguchi, Clowe, Plihal, Ehrhoff and Lukowich.

Speaking of padding their score, the Stars would make it 4-1 just 83 seconds later when James Neal one-timed a pass from Mike Modano to send it top shelf.  Loui Eriksson had the secondary assist.  The goal marked the second time in as many games that Brian Boucher had been scored upon in consecutive shots = he let in shots 7 and 8 in Montreal, and tonight had allowed 26 and 27 through.  Credit to Neal, though – that was a sick goal.  Plus-ones = Neal, Modano, Eriksson, Robidas and Daley.  Minus-ones = Marleau, Thornton, Setoguchi, Murray and Boyle.

Down by 3 goals, the Sharks had the chance to pull within two at 9:15 when Mark Parrish was called for high-sticking Brad Staubitz.  The primary excitement from that man-advantage was a Setoguchi shot that went off of Turco’s post.  The Sharks also came close to the Stars’ shot total – it was 23-27 at the expiration of the penalty.

The Sharks would get one more (abbreviated) power play to finish the game – Nicklas Grossman was assessed a high-sticking minor (drawn by Jonathan Cheechoo) at 16:27.  However, just 13 seconds into the man-advantage, Dan Boyle cross-checked new Dallas Star Steve Begin, making it a 4-on-4 for 1:47… and ruining any chances of a miracle comeback for Team Teal.

The Sharks host the Minnesota Wild on Thursday night – with or without certain members of the squad we saw tonight.