D-Day is upon us and not too much is shaking in Shark land. For a primer for today's festivities, please head over to SwisherThresher's excellent fanpost. You will find numerous sites to watch today, trade deadline history, and a rundown of deals that have occurred thus far.

A brief look at who's on the market for the Sharks and a player that could be a solid depth addition after the jump. Make sure to check out the SBN Trade Deadline Hub (click on the picture below) during the day for analysis from other blogs around Al Gore.

Jonathan Cheechoo is off the a market. H/T to Section223 for the find yesterday:

No matter what may be circulating out there, Jonathan Cheechoo isn’t going anywhere. "That player is not in play."

A little surprising to shut the door on Tuesday considering his production this season, but as SwisherThresher noted he may have been in play at one point and DW didn't like the deals. Gray and Dave agreed that his contribution to the franchise is too much to deal in a year when we have a strong bid for the Cup.

Regardless, here's to hoping that Cheech's performance is akin to Patty's resurgence after the deadline last season. 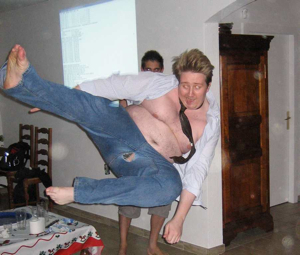 Let's kick some ideas around

The Skinny: Brendan Morrison has played fairly poorly for the Ducks this season, but there was a fair amount of buzz around him coming into this year. He's not going to shoot the lights out, but does deliver around twenty goals a season. Minimal time on the power play and penalty kill. Racked up roughly .7 points per game while playing in one of the league poorest offensive teams (Vancouver, before this season).

Has been so-so this year, but I think it might be a product of his situation. He was placed on waivers yesterday, and although the Sharks will be one of the last teams with an opportunity to claim him, he could provide that veteran third liner with some scoring pop that we’ve been looking for. Honestly, watch out for this one. I would be thrilled if the Sharks picked him up.

That being said (if my knowledge of the salary cap is up to date), we might be right on the bubble in terms of cap space. If Grier and Roenick are placed on IR however, I’m fairly certain we can squeeze him in with about three pence to spare.

The Verdict: Who knows, I sure as hell don't. Doug Wilson is a hard cat to read but I think this meshes nicely with what he has stated before in terms of this year's deadline. We're not looking for a huge deal just minor tweaks. We're not giving up anything to claim him. We have no obligation towards him after this season as he will be a UFA.

The Skinny: I'm not advocating a trade for Ehrhoff, and the return on him would probably come in the form of a defenseman. The Sharks can't really afford to roll out Alexei Semenov as the sixth D come playoff time (no matter how well he has played this year). It would also leave Derek Joslin as our seventh man. Not enough experience on the backend to make a deep run if we trade Christian for a forward.

The Verdict: Honestly? I only included him because when you put up an overweight guy doing a flying kick you have to have at least two players listed. Is this Soviet Russia? I'm dealing with production quotas and the work quality is totally suffering.

In summation, it really looks like the Sharks will stand pat at the deadline in terms of trades. I think the waiver wire is the only splash we see The Godfather make, if he even shows up at the pool at all.

Fire off those story links in the comments folks.