Share All sharing options for: Greatest Sharks: Department of Defense 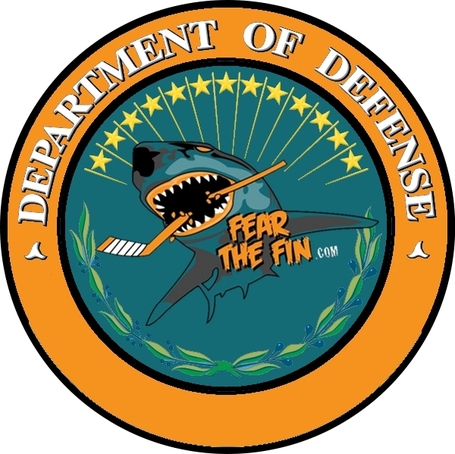 Yea, we've got our own seal and everything... we don't mess around here.

Noble FTF readers, I salute you. After countless rounds of voting and some really bad puns, you picked a fantastic group of forwards to get FTF's "Greatest Sharks" team off to a good start. You also took any and all responsibility off our shoulders. Kudos.

Although there ended up being a few snubs (Jamie Baker, Jeff Odgers) and a few "huh?!" selections (I'm looking at you Korky), the FTF staff was very happy with the results. (The full list of forwards can be found here.) However, as the "Greatest Sharks" team photo fills in, we start to see a problem with the back end of the roster.

When you look at the Sharks' list of defensemen, you begin to realize that we've had our share of mediocre players. Granted, moving on to the defensive side gave me the opportunity to throw down this slick photochop, but that's beside the point. What we have here is a thin list of players to choose from, mostly due to the relative youth of the franchise. You won't find any big stars on this list (none of the really big names were in the prime of their career while they played in San Jose), but I still think it's possible to put together a respectable group.

Once again, FTF asks you to pick who stays and who goes. It's kind of like Survivor... only without the $1,000,000 dollars, alliances, and harsh climates. And six people win. Well, I guess it's nothing like Survivor at all. Just vote, O.K.?

Make the jump for player analysis. Unlike in previous rounds, a player only needs 15% of the vote to be awarded inclusion. Full rules can also be found after the jump.

Note: To be considered a member of the "Greatest Sharks", you must have played parts of a minimum of three seasons with the team. A player must receive at least ten vote s and 15% of the overall vote to be included on the "Greatest Sharks" roster. If the ten vote and 15% total is not met by at least six players, a second round of voting will take place which will include all players who did not receive at least ten votes and 15% of the vote.

Scott Hannan: Hannan, another Sharks' first round selection, was quite possibly the most talented defensive player to ever wear teal. Making the all star team during the 2003-2004 season, Hannan was an integral part of the Sharks success during that years' playoffs. Against the Colorado Avalance, Hannan effectively shut down NHL legend Peter Forsberg, helping the Sharks advance to the conference finals for the first time in team history. Bryan Marchment: Accused of being somewhat of a "dirty" player during his NHL career, Marchment played six seasons with the Sharks. Averaging more than a minor penalty per game while with the team, the assistant captain was a popular figure in San Jose and often set the tone of the game with either his physical style or by engaging a well placed scuffle with the oppsoing team. In 2000-2001, Marchment participated in a career high 11 fights.

Kyle McLaren: Possessing one of the best hip-checks in all of hockey, McLaren was one of the most feared defensemen in the NHL. After being traded to the Sharks in 2003, McLaren (with his signature bright yellow visor) would contribute 72 points in 241 games with the team. Although knee and back issues slowed him towards the end of his career with San Jose, McLaren was always a fan favorite and an important piece to the Sharks success.

Jayson More: More was one of the first Sharks, as he was taken from the New York Rangers in the 1991 NHL Expansion draft. More spent five seasons with San Jose, helping the team to their first playoff appearance during the 1993-1994 NHL season. In 287 games with the Sharks, More posted 50 points, racking up 545 penalty minutes in the process.

Jeff Norton: Oddly enough, the journeyman Norton would play three separate stints with the Sharks. In 225 games with the team, Norton notched 93 points and added 14 during the playoffs. He was somewhat of a good luck charm for the team, as the Sharks would make the playoffs in five of Norton's six seasons in San Jose.

Sandis Ozolinsh: One of the most gifted offensive defensemen in recent memory, Ozolinsh played for the Sharks in parts of four seasons to start his NHL career. Drafted 30th overall by the Sharks in 1991, Oz would score 43 goals and add 73 assists in 173 games with the team. In 1993-1994, Ozolinsh made his first NHL All Star appearance (along with Artus Irbe). He would score three points in that game, two of which being goals. Ozolinsh was traded to Colorado for Owen Nolan in October of 1995.

Marcus Ragnarsson: As Mike Rathje's defensive partner for most of his NHL career, Ragnarsson enjoyed some successful seasons in San Jose. In 519 games with the Sharks, the Big Swede amassed 153 points. In 2000-2001, Ragnarsson was selected to the NHL All Star team, one of only a few San Jose defenseman to ever make the cut.

Mike Rathje: The third overall pick in the 1992 NHL Entry Draft, Rathje would play 11 seasons with the San Jose Sharks. The six-foot-five lefty was an imposing presence on the ice. Although his career with San Jose was somewhat tarnished after his holdout during the 2001-2002 season, he played more games in teal than any other defenseman. Rathje was never an offensively minded player, but he still has more points than any other Sharks defender. In 671 regular season games with San Jose, Rathje would tally 155 points.

Brad Stuart: Perhaps no San Jose Sharks prospect was met with as much hype as Brad Stuart, who was selected third overall in the 1998 NHL entry draft. Billed as an extremely skilled offensive defenseman, Stuart would score 153 points in only 377 games with San Jose. His most famous goals came in 2004, when he scored two goals in a span of 17 seconds against the Los Angeles Kings. In 2007, Stuart was traded to Boston along with Wayne Primeau and Marco Sturm for Joe Thornton. He would go on to win a Stanley Cup with Detroit in 2008.

Gary Suter: Although Suter joined the Sharks in the twilight of his NHL career, he still showed the skill that made him one of the best defensemen in the history of the league. Suter would score 101 points in only 227 games with the team while playing a solid defensive game. In his first full season with the Sharks, Suter would score six goals, adding 2 goals and 5 assists in 12 playoff games.

Rob Zettler: Never a master with the puck, Zettler only tallied one goal while in San Jose. As more of a defensive defenseman, Zettler was known for his strong play in his own zone. In 196 games with the team, Zettler would earn 314 minutes in the box.