Share All sharing options for: Somebody call the Waaahmbulance 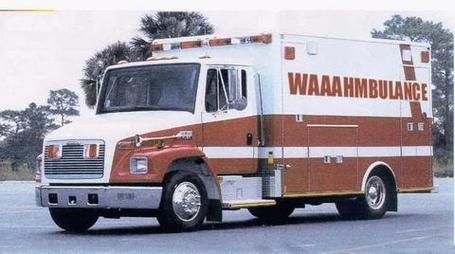 I consider myself pretty lucky. Not only do I get to have fun writing for FTF, but I've met some pretty great people in the process. I've even been able to chat with some of the site's patrons in a non internet environment.

While Lurker and I were nerding out before Watchmen on Friday, we inevitably started talking about the Sharks. We, of course, began to ponder the current losing streak and it's implications on our playoff hopes. Inadvertently  (after a few pints of Pyramid) we were rolling through a laundry list of issues, attempting to find the root of the Sharks' recent problems.

Somewhere in the discussion it was brought up that we are, after all, still in first place. Eventually, one of us brought up the fact that we also still have two games in hand (It wasn't two at the time, but bear with me).  Even so, the Sharks were still playing like a hot bowl of crap... and we were letting them have it.

Like most long time readers on this site know, I'm a bit of a stat geek. Even though I appreciate accuracy, I'm alright with bending the truth a bit. I've even tried to "statistically" prove that Setoguchi was better than Crosby. Yea, I know. Genius. Turns out Lurker is the same. So, of course, the recent play of the first line was put under the microscope. No one is immune to ridicule, and Joe has been taking some heat round FTF lately. And, by golly, he deserves it!

He's been off his game lately, leading the team with 72 poin...

He hasn't really been helping his line mates, as Marleau and Setoguchi are having career definin...

That's when it hit us.

I'm not saying that the team is above criticism. Far from it. In fact, we depend on this type of talk. FTF would cease to exist without the steady infusion of disgruntled fans. Mymclife's recent game reaction (after the Vancouver stinkfest) was one of the most popular fan posts we've ever had. She made some great points, and she's right on the money. These reactions are totally valid, and expected. It means you care. It's a good thing.

However, allow us to take your hands off the imaginary panic button. Instead, hug a pretend puppy. Cuddle a dreamed up kitten. Unless you're allergic. Then just sit there and continue reading, popping Zyrtec like communist skittles.

There have been a few articles recently that have given us some possible reasons for the Sharks recent shoddy play. Sharks Hockey Analysis' "4 Reasons we Shouldn't Panic" is a great way to read yourself off the ledge. Even ESPN has stood up for the Sharks, as Scott Burnsides' latest "5 Things" pointed out some potential causes for the current losing streak. Mr. Plank, our glorious shining god of a leader, is rolling out a bevy of excuses in the latest gameday thread. They're all good reads.

So, as always, there are problems. Watching hockey wouldn't be any fun if there weren't. But they aren't as bad as the problems we've faced in years past. Marleau isn't pissed, we've got legitimate stars to go with some good young talent, and there aren't any major coaching issues/clashes with players. So why are we so critical? After some soul searching, here's what I came up with.

1: As I said above, we're spoiled. The almost perfect play of the 2008 Sharks got us into such a fervor, that we expected an NHL record breaking pace all season.

3. You're a cold hearted bastard, and nothing makes you happy.

It could be any of these things, or it could be your own unique reason. Point is, it doesn't really pay to freak out. If anyone wants a cup more than the fans, it's the players. I'd bet everything that they're trying to rectify the problems before we can find any others.

I'm not trying to insult anyone (except idunno, 'cause he asks for it). Therefore, after I accuse you of being afraid, spoiled, and mean like me, I ask you... why are you critical of the Sharks? Do you still have hope?

(Apologies to Lurker, I took a few creative liberties with the exact details of our conversation to enhance my article. Journalism's a bitch, aint it?)