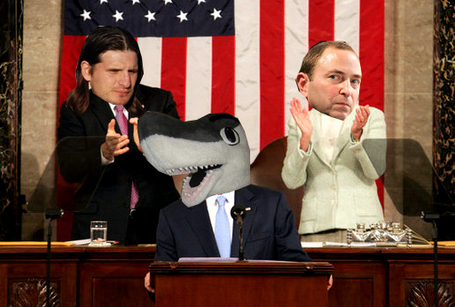 As most of you know, FTF submitted their team award winners for SBN's very own NHL Awards Show earlier this week. It was a lot of fun to rub elbows with some of the best bloggers in the business, so we figured why not do it a second time.

Join us after the jump.

Hart: Marleau has been an absolute workhorse this season, playing big minutes on the penalty kill, power play, and even strength. Ovechkin deserves it, but in my eyes, Datsyuk is the best player in the NHL.

Norris: Coin flip city when it comes to the Sharks, but Vlasic is my go to guy when we have a one-goal lead in the third. Best defenseman on the team. Green and Chara is a tough pick as well, but Chara gets the nod for his leadership and PK presence.

Vezina: Nabokov is a no-brainer here, and has looked great since coming back from injury. Tim Thomas has been at the top of the goaltending heap all season.

Selke: Pavelski is solid defensively, and his play this season on both ends of the ice needed to be acknowledged. Patty can't take em' all. Datsyuk is the best two-way player in the league, and a big reason why the Wings are still the team to beat.

Calder: McGinn is making a strong bid to crack the Sharks playoff roster, Mason is the only reason Columbus is thinking about theirs. Bobby Ryan also deserves mention, but goaltending is the toughest position in sports.

Adams: Ron Wilson has worked wonders with the team this seas... wait, who's this McLellan guy you're talking about? Andy Murray is in the mix, but Hitchcock took the Jackets to their first playoff in franchise history.

Masterton: Five years out of the league and Lemieux makes his return. Sullivan's career was supposedly over, now he's a big contributor in the Preds playoff push. Zednik is another great choice.

Hart: Patty represents everything the 08/09 Sharks are about.  He turned his -19 plus/minus performance last year to +18 this year, has played from the 1st to the 3rd line and in every type of PP/PK situation, and is 2nd in the NHL in Game Winning Goals. He even built a street hockey court at Washington Elementary.  Can I nominate him for sainthood?

Norris: What kind of idiot traded away Dan Boyle?  Like Marleau, he’s just as solid at even strength as on the power play as on the penalty kill.  Dan Boyle’s skating makes angels sing.

Vezina: This was easy, but Nabby really deserves more credit throughout the NHL. He’s in the top 10 in Wins, GAA, Shutouts, and Minutes, and he won’t even sniff the Vezina this year.

Selke: Patrick Marleau. It feels strange not to write Griersy, CuBro, or even Mitchell here.  Patty does it again though, netting 5 shorthanded goals.

Calder: In a year, Sharks rookies went from Setoguchi & Mitchell to, well, McGinn & Vesce. The fact Vesce came in second is kind of sad.  McGinn has consistently brought energy and effort, which was apparently too much to ask from Lukas Kaspar.

Adams: This looks similar to Nabokov’s situation where McLellan will receive little national attention for his success in the uniquely challenging Sharks job.  San Jose’s success this year was not a given.  McLellan has done an amazing job changing both the system and the attitudes in San Jose.  I can’t wait to see how he does in the playoffs.

Lady Byng: 72 points and 18 penalty minutes?  He’ll be an NHL-wide nominee again. Honorable Mention to Joe Pavelski, who got shafted on his PTS to PIM ratio with that ridiculous phantom headbutt against Dallas.

Hart: Goals mean more than assists, and balanced points are even better. Marleau's only the third Shark in history to go 35/35.

Norris: Boyle's ability to play big minutes in all situations, plus his big offensive upside, give him the nod.  And the fact that Green doesn't have horrible defensive stats make him a slam-dunk overall.

Vezina: Nabby's the workhorse he's always been. And Thomas is #1 in both GAA and SV%.

Selke: Marleau actually went a good part of the season being on the ice for more goals shorthanded than power play goals allowed.

Calder: McGinn will be a regular on this team next year.  Columbus doesn't make the playoffs without Mason, period.

Adams: McLellan turned 10K gold into 24K gold. Murray turned a sack of crap into a sack of quarters.

Lady Byng: Staring at people instead of fighting them should be rewarded.  Wellwood is just a wuss.

Hart: Patty. Do I even need to say why? Have you watched him this season? For the NHL I'm going to go out on a limb here and say Ovechkin. I'm sure that will surprise everyone who's been under a rock for the past 81 games.

Norris: Sure, Vlasic's a good pick but overall I think Boyle has a better chance of winning so I'm sticking with him. I think Mina would want me to pick Green, so I will.

Vezina: Nabby. Is there any question why? The overall goes to Tim Thomas. Why? He's a Cyclon!

Calder: I don't know why, I just feel like McGinn was the best rookie on the ice for us this season. I also think he's got a good chance of hitting the show on a more permanent basis very soon. Mason for the league-wide. Dude carried his team. They'd be lost without him.

Adams: I'm going to have to say McLellan. I know this normally goes to a coach with a terrible team that plays above and beyond what was expected of them, but what McLellan has done so far has been extraordinary. He's gotten a lot out of a team that everyone said had no heart. Other good candidate exist, but I'm sticking with Todd for the NHL.

Lady Byng: Joe Pa. I know he has too many PIM, but he wouldn't if it weren't for that phantom headbutt, so I say it's his.

Masterson: Part of me wants to give this to JR, because I kinda think he deserves it. Since these reflect Gray's NHL universe, he wins it. Sorry Lemieux. Sullivan is the winner hands down.

Thanks to all who submitted. Be sure to check out all these sites whenever you get on Al Gore. As always, you can find them in the sidebar.