San Jose vs. Anaheim: A First Round First Look

Share All sharing options for: San Jose vs. Anaheim: A First Round First Look 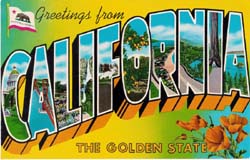 Greetings from a playoff bound California, Kevin Lowe- do hope you enjoy watching from the couch.

1) Finally breaking ground on the rivalry (that travel thing is nice too). The Ducks have always been a funny team to play, because for all the geographic proximity the two squads are blessed with, it's never felt like something immense was on the line. Yes, the Pacific division has been tight the last few seasons, and there is definitely something to be said for coming out on top of that heap; however, at times it has felt like something of a formality. The playoffs make those 82 games seem like a morning skate.

In terms of travel, San Jose won't have very far to go- one hour flights will be a blessing later on, provided they make it out of the first round.

* Oh, and if someone tells you, "This is the first playoff series in California history," go ahead and shoot the messenger. In 1969 the Oakland Seals lost in seven games to the Los Angeles Kings.

2) Relative success in the Honda Center. Since the lockout the Sharks have gone 8-4-3 at the Pond, including a 2-1-0 mark this season. While that may not be all too convincing in the modern NHL (shootout anyone?), it's safe to say there isn't a mental block of Joe Louis proportions when it comes to sunny Southern California. They clinched the Pacific there last year. Coupled with the ludicrous home record San Jose has compiled this season, the venue advantage seems to have tilted in San Jose's favor.

3) Let's get physical, let me hear those bodies talk. A lot is going to be made of the Ducks perceived physical advantage, but I'm just not buying it. Ever since Trade Deadline '09, the Anaheim team I have seen has drastically changed their philosophy. Instead of generating offense through their forecheck they have begun to rely on stickhandling and passing to produce scoring opportunities.

It's not the same style that won them the Cup in 2007. This isn't to say that the new Ducks team doesn't have enough skill to scare me (or lacks physicality)- they most definitely do. However, as we saw in the first game of the season (my oh my we're taking a trip through memory lane here), a Sharks team dedicated to the forecheck can impose their will on Anaheim.

I guess being one of the biggest teams in the league will do that for you.

1) Chris Pronger. Love him or hate him, the former cast member of the hit Broadway musical STOMP is arguably in the top three defensemen in the league today. Jiminy Cricket never paid a visit to this man, and it sure as hell shows. He's going to log big PK minutes, he's going to put missiles on net from the point. He's going to beat the tar out of any Shark in front of the netminder, he's going to crosscheck our skilled guys in the corner. His murky sense of wrong and right is what makes him so damn effective.

It's also what makes him so much fun to hate.

2) Rogaine and his friends. Ryan Getzlaf's line has been ridiculous down the stretch- between him, Bobby Ryan, and Corey Perry, they have amassed a whopping 38 points (17 G, 21 A) in the regular season's final ten games. Quite impressive, especially considering that Teemu Selanne has enough gas in the tank to cause headaches for Nabokov.

Look for former teammate Travis Moen to draw this assignment on a nightly basis, with Grier and Goc providing support. This matchup is absolutely essential for San Jose.

3) The Calgary Effect. The Western Conference has been brutal in years past in the sense that nearly every team has a viable shot of advancing to the Stanley Cup Finals. The same is true this season.

However, some team's are more suited for a long run- Detroit and San Jose fit this bill obviously, but what about Anaheim? They're two years removed from a Cup, have a pair of the best blueliners in the NHL today. Embarrassed last season by the Dallas Stars in the first round, it's a given that they are hungry. Could this be the Calgary Effect all over again, where a seven game series is the most likely route these two teams will take?

Only time will tell.

Wildcard City: Jean-Sebastien Giguere. Jiggy hasn't been able to put the jigsaw puzzle together the entire season, but has been lights out in playoffs past. If Hiller (who I assume has the keys to the car) struggles early, it will be interesting to see which JS Giguere decides to suit up.

Also, and this bears mentioning- the Sharks have the most to lose in this series.

San Jose skidded into the playoffs and the one-seed, while Anaheim has been one of the hottest teams since the break. We'll take a look at some numbers later this week, but please do keep in mind there is a reason the Sharks amassed a league-leading 117 points this season.

It's the NHL playoffs people. Do you want to take your chances with Ken Hitchcock? How about one of the hottest teams since January? You're going to have to beat tough teams on the road to the Cup, there's no easy draws. Do you honestly think that the Ducks are ecstatic they drew the Presidents' Trophy winners? Get real.

Teams are going to be scared to play us- it's sure as hell not the other way around.