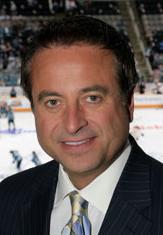 Randy Hahn is the play by play commentator for the San Jose Sharks, and has held that position for sixteen seasons. Along with his current broadcast partner Drew Remenda he has won three Northern California Emmy Awards. Mr. Hahn was kind enough to answer some questions about the upcoming playoff series with Anaheim, his affinity for pretzels, as well as other assorted items of interest. You can read more of his musings at The Seagate Broadcaster's Blog, as well as joining him and Drew during the game on CSN Bay Area. Enjoy.

Thanks for taking the time to do this Mr. Hahn. Frankly we were a little surprised Versus decided to televise the whole series considering the Sharks nor the Ducks have gotten many nationally televised regular season games over the past few years- is this a message that the hockey community as a whole is taking an interest in the relatively untapped market of California?

That might be partially the case but I think it's an opportunity for Versus to tap into two large television markets- The Bay Area is the number six market in the country and the Greater Los Angeles area is the number two TV market. The Ducks won the Stanley Cup two years ago and generated a lot of interest in Socal and the Sharks have enjoyed a large ratings boost in their games this year.

We're good friends with some writers over at an all-California hockey site The Battle of California. They finally feel their name is validated. You've mentioned before that true rivalries are born in the playoffs- as a broadcaster, is there something a little more special about calling this series as compared to a match up with St. Louis?

Absolutely. The teams know each other so well. Until the schedule change this season they faced one another 8 times in the regular season. The fans know the key players on both teams. Sharks fans have it in for Pronger, Perry and Selanne. Ducks fans hate Shelley and Nabokov. It will make for a tremendous atmosphere in the arena's and therefore it should be compelling television.

"Seeing Through The Hays" or "Drew's Clues." Which has the better name.

Drew's Clues, of course. Little know fact, Brian Hayward made his television analysis debut in 1991-92 when he was a Sharks backup goaltender. Hazy was injured and sat in with me to call a game at the Cow Palace.

Speaking of the Ducks announcers, do you guys have anything riding on the series? Dinner maybe? If so, make sure you get soup when Hayward takes you out and state afterwards that it doesn't count as a meal.

I love soup! So far there is no wager.

In terms of your broadcast schedule, CSN won't be covering game three. I assume you will still be traveling to Anaheim to watch the squad. Do you get tickets into the arena? Free popcorn and a soda pop? Please tell me they at least comp your soda pop.

I will likely be seated in the Honda Center press box where all beverages, including soda, are provided for the media. They also have delicious popcorn, cookies and after the first intermission trot out warm pretzels with mustard. I'm making myself hungry.

Anaheim's a big, physical team two years removed from a Stanley Cup. Do you think we will be seeing Jody Shelley and Claude Lemieux a lot during the series, or will McLellan go with some of the quicker forwards?

I think speed will be the one weapon the Sharks can use most to their advantage. Fourth lines typically don't see much ice time in the early playoff rounds. At this point Lemieux figures to be a healthy scratch going into game one.

Nabokov has mentioned travel is not an issue in a playoff series, while Ryane Clowe said the close proximity will be helpful.

I think the travel will be great for the players, but it will equally benefit both teams. What it should provide is fresher players on both teams and therefore better hockey.

Dan Rusanowsky exclaimed, "What in the knick knack paddywack give a dog a bone is going on around here?" earlier this season when Corey Perry had his run-in with Nabokov on March 15th. What were your feelings on that situation at that time, and will it have any bearing on the upcoming playoff series?

Corey Perry was just doing what Corey Perry does. He's a pest. A highly talented one. I doubt you'll see those types of things once the series starts, unless there's a blowout game. I must say I've never heard the word "paddywack" on an NHL broadcast before. Rusanowsky is a genius.

Chris Pronger has given Sharks fans and players fits over the last decade. Have you noticed anything over the last couple seasons San Jose can take advantage of?

I don't think you can get into his head anymore like the Sharks did when he was in St. Louis. He's more poised and disciplined now. The way to take advantage of Pronger is with speed.

Time for your best Miss Cleo impression- how many games will this go, and who gets the series winning goal? It's okay to be bold- we like bold around here.

The series will go to a seventh and deciding game at HP Pavilion, and Ryane Clowe will score the winner.

Thanks again for doing this Mr. Hahn. We love the work you and Drew do on a nightly basis- it's truly an honor to have the best broadcast team in the biz calling the best hockey team in the NHL. Any last thoughts before you lead us into battle on Thursday?

We all enjoyed the regular season. Now enjoy the playoffs. It's the best time of the year for a hockey fan, and for a hockey broadcaster.