Share All sharing options for: Greatest Sharks: Mind Yo' Netminders 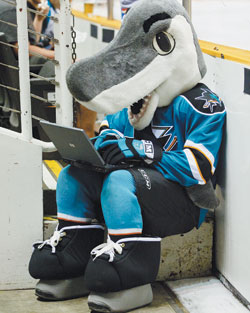 When it's down to the wire, even Sharkie logs on to vote!

Well, FTF'ers, it's been a journey. A long, not too difficult, not too meaningful journey. But hey, we're almost done... so cut us some slack. After rounds upon rounds of voting in a process that carried us through the regular season, we're finally seeing a light at the end of the tunnel. The forwards have been selected, and so have the defensemen. The final vote (of the regular season, the Coaches vote will be held after the season) is upon us. It's again time for you to choose. Are you a lover of Latvia, or kuh-razy for Kazakhstan? Are you a fan of Finland, or coo-coo for Canada? Your vote holds the answer.

Well, not really. What the vote will tell us, however, is who you believe is the greatest goaltender in the history of the San Jose Sharks. We, your humble authors, submit five goalies for your consideration: Arturs Irbe, Evgeni Nabokov, Steve Shields, Vesa Toskala, and Mike Vernon.

We're thinking this vote will be pretty tight. And unlike in rounds past, there will only be one go round of voting. Whoever takes first will be the starting netminder for your "Greatest Sharks" team. The player who takes second will be named the backup.

As always, make the jump for some FTF player analysis.

Artus Irbe: Although drafted 196th overall by the Minnesota North Stars in 1989, the Latvian Irbe played his first NHL game as a member of the San Jose Sharks in 1991. With the addition of Irbe, the Sharks were blessed with a reliable goaltender for the first time in their short history. Nicknamed "The Wall", Irbe led the Sharks to their first Stanley Cup Playoff appearance in 1993-1994. During the season, Irbe played a then NHL record 4412 minutes for the Sharks, going 30-28-16 while posting a 2.84 GAA and a .899 save percentage. Although he ended his San Jose career on a sour note (he had a disastrous final season with San Jose after he was mauled in the off-season by his pet dog) Irbe would win 57 games while in teal, including the first shutout in Sharks history. He remains one of the most loved players to ever skate for the Sharks.

Evgeni Nabokov: Ironically making his debut on January 1st, 2000, Nabokov grabbed hold of the starting goaltender spot and has remained a top goaltender for almost a decade. Although other players in the pipeline (Kiprusoff) were more highly touted than Nabokov, the Kazak netminder silenced critics when he stepped in for the injured Steve Shields during the 2000-2001 season. Not only did Nabokov make the 2001 NHL All-Star team, but he won the Calder Trophy (awarded to the NHL's top rookie) while leading the Sharks to the Stanley Cup Playoffs. Although briefly passed by Toskala for number 1 slot in the mid-decade, Nabokov has always had the skill to carry his team. "Nabby's" stellar career has seen many thrilling moments, but three things stand out above the rest: He's the first goalie to ever score a power play goal, he stopped all eight shots faced in his second All Star appearance, and he played the game of his life against the Dallas Stars in the 2008 Stanley Cup Playoffs. The game, which went into four overtime periods, was ultimately lost but will be remembered somewhat fondly for Nabokov's amazing glove save on Brad Richards.

Steve Shields: Playing between the pipes for the San Jose Sharks for parts of three seasons, Shields would lead the Sharks to the second round of the Stanley Cup Playoffs in 2000. Although Shields would put up very respectable numbers for the Sharks (a 2.44 GAA in his three seasons with the team), he would ultimately be replaced by then rookie Evgeni Nabokov after suffering an injury in the second game of the 2000-2001 NHL season. After the emergence of Nabokov as a Calder trophy winning elite netminder, and with then top prospect Miikka Kiprusoff waiting in the wings, Shields was traded to the Mighty Ducks of Anaheim in a package that brought Teemu Selanne to San Jose.

Vesa Toskala: With the Sharks and Nabokov's inability to agree on contract terms to start the 2002-2003 season, Toskala was thrown into the fire. Serving as a backup to Kiprusoff, Toskala played well, going 4-3-1 while posting a 2.35 GAA and a .927 save percentage. Once Nabokov returned, Toskala was sent back to the minors while Kiprusoff remained the backup. However, it was Toskala who ultimately won the job of backup goaltender, impressing the Sharks' coaches and front office enough to force a trade of Kiprusoff. Although Toskala competed with Nabokov for most of his time with the Sharks, he still was able to put up admirable numbers without continuity of play and rampant trade speculation. After splitting starting duties with Nabokov for most of the 2006-2007 season, Nabokov was given the nod for the remainder of the season and the playoffs. As expected, Toskala was traded in the 2007 off-season, and is now the starting goaltender for the Toronto Maple Leafs.

Mike Vernon: After already establishing himself as an elite NHL netminder with the Calgary Flames and Detroit Red Wings, Vernon joined the Sharks in 1997. With 14 NHL seasons, two Stanley Cup Championships, five NHL All Star appearances, and Conn Smyth and William M. Jennings trophies under his belt, Vernon was the most decorated goalie to ever wear teal. Although he played well while in San Jose (putting up a regular season GAA of 2.39), Vernon was never able to help the Sharks past the first round of the playoffs. In the 1999-2000 NHL season, Vernon was traded to the Florida Panthers. Vernon would finish his career in Calgary, where his number (30) hangs from the rafters.