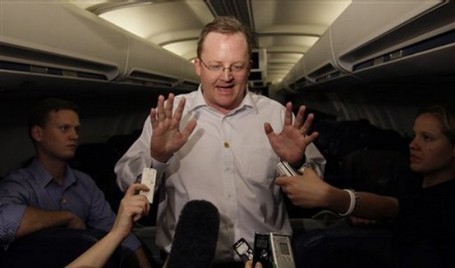 Ladies and gentlemen of Sharks Nation.

Thank you for joining me this afternoon in lieu of Mr. Roenick's comments yesterday. I'm sure most of you have seen the interview, but our press liaison SwisherThresher has provided brief documentation for those unaware of the situation.

Be sure to familiarize yourself with this before reading on.

These quotes pose a hostile enviornment for everyone involved. As most of us know, in the eyes of the greater NHL community, our esteemed State has become somewhat irrelevant since late May of of this year. The circumstances surrounding our hasty removal from the national stage has been well documented.

Mr. Roenick's comments to the press yesterday have changed all of that. Unfortunately, the results of his actions have caused a severe backlash amongst the public, and tarnished our stellar reputation. We are familiar with Mr. Roenick's media daliances- in the past he has called Sidney Crosby a crybaby, stated that he would prefer if a certain subset of NHL fans not watch the game post-lockout, and claimed that Team USA had blackballed him.

Our current situation calls for spin control. It is high time we turned this controversy into something that will benefit us all; and while we do not usually condone lies and deceit, many here realize that in order to win the media battle, you must toe the line between possible and plausible.

This is our duty today.

The purpose of this War Room meeting is to come up with a group of possible situations in which Mr. Roenick may have uttered these statements. I have prepared a press release explaining the situation, and suggest you do the same.

As most of you know, Mr. Roenick has been under extreme duress over the course of the last month.

Mr. Chelios has been a dear friend of Mr. Roenick since their playing days in Chicago, once calling him his favorite teammate of all-time. In order to fully understand this situation, we must keep this in mind.

Mr. Roenick's comments yesterday, while publicly being denied by Mr. Chelios, seem to have a correlation with that aforementioned fact. It is our understanding that there would be no reason for Mr. Roenick to put words into a friend's mouth. If Mr. Roenick's previous comments to the media has taught us anything, it is not in his blood to lie, and most importantly, it is that he will say what is at the forefront of his mind.

One must also take into consideration Mr. Chelios' age- it is entirely possible that he forgot he spoke with Mr. Roenick and/or is under such pressure from Mr. Babcock that he feels his career may be in jeopardy by confirming this statement.

While Mr. Roenick's comments may be ill-timed, that should not steer us away from what lies at the heart of this situation- a fellow human being defending another human being whom he holds in high regard. There is no reason for Mr. Roenick to slander the reputation of Mr. Chelios, and no reason for him to disrupt Mr. Chelios' current lifestyle unless he feels that lifestyle is in danger.

We believe this is the situation we find ourselves in today.