Dr. Wilson And The Extraordinary Autopsy

Share All sharing options for: Dr. Wilson And The Extraordinary Autopsy

May 14, 2009. Dr. Wilson, after a galvanizing meeting of mortal and immortal at State of The Sharks, engages in a team autopsy that continues to this current day.

Using our powers of persuasion imagination, FTF was able to get insider information of the events following that meeting. This is Dr. Wilson's story.

Dr. Wilson: Alright Joe, Patty, any last words before you go under the knife?

Joe Thornton: Under the knife? What the hell is this place anyway?

Mike Ricci: I'm going to be honest with ya buddy. This place has seen some ugly, ugly things in it's day. Hell, this is where Rod Brindamour and I get together with Richard Kiel for our weekly poker tournaments. If these walls could talk, they wouldn't talk at all- they would scream.

Ricci: Just shooting ya straight. Let's hope Wilson over here is more adept with handling a knife than you are. Wouldn't want your face ending up like that piece of toast you butchered in cold blood back in '06.

Todd McLellan: Enough chatter boys. This is all about the process. And that process begins right now.

Thornton: God save us all.

[Wilson begins to slice open Thornton and Marleau, apparently searching for something.]

McLellan: What do we got boys.

Ricci: Not too much thus far. We found one copy of a Milford Academy pamphlet in Marleau's left jean pocket. There's a note from a Buster fellow inside the front cover- sounds like he's a big fan of Patty's work over the last few years. No idea what this stuff means.

Wilson: All we have-

[Brian Boucher and Drew Remenda walk through the door.]

Brian Boucher: Yez yez, I know you iz ze bald man. How many timez must you remind me? Beginning it is to sound like my babooshka after drinking many many vodka's.

Drew Remenda: Maybe it's just a way of alleviating my embarrassment over the whole matter- although, there are other areas of my body where I'm able to grow hair follicles.

Boucher: Luck embraces you today, for we find ourselves not in the cold grip of Raj Mathai and hiz atmosphere of family, but among those who accept you for your remarks of boldness.

Remenda: You Russians are so enlightening you know that? Hey, look it's the greatest player in the world and Dougie....wait, what the hell is going on in here?

Wilson: Nothing at all Drew. By the way, have you mailed in your membership fees for the Northern California Emmy Awards? I'm pretty sure you forgot about those.

Remenda: Man, you sure are a pal. I'll head out and do that right now!

[Boucher and Remenda exit the room, only to find Larry David outside. Drew and Larry begin to chat at length about the discrimination they face as members of the bald community, both citing examples of Halloween pranks that occurred at their homes. Remenda's membership fees never get mailed.]

McLellan: Now that's what I call sticking to the process.

Ricci: Good work, Wilson. Any new developments with either one of these guys?

Wilson: Nothing yet... wait, hold that thought. Dear God!

Wilson: Why it is. Never in my life did I believe we would unearth an artifact of this magnitude. Could it be that the Prophet Purdy was wrong all along?

McLellan: The process is nearly complete. Mike, the honor is yours.

Ricci: (ahem)... As it beats like a drum under the San Jose sun, we will toast this day!

McLellan: As it possesses a weight that shakes this state, the vultures are held at bay!

Wilson: We have held our gold and let it be told, not a team will lead us astray!

All: Hearts we have found burning for that elusive fourth round, hey Hey HEY! 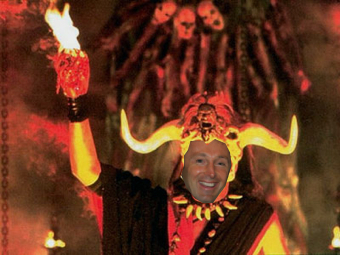