The other day, I was mentioning to Wilson that the draft's first day (June 26) will be quiet for him because the Sharks don't have a first round pick.

Whether or not this happens is up for debate, but with the draft looming at the end of this month it's a good excuse to take a look back at San Jose's previous selections. The frustrating thing about the NHL's draft when compared to the NFL is twofold: a) it doesn't get as much publicity (which is a problem hockey has to deal with in all aspects surrounding the game) and b) the pool of players can come from anywhere in the world, as opposed to solely American college games (which you can theoretically watch every Saturday).

Anyways, back to Purdy's article. Straying away from the possible players who would yield such a return*, let's take a quick meat and potatoes look at the first round draft history of San Jose beginning from 2000.

*Feel free to add your own possibilities in the comments- looking at the current roster it would seem that Thornton, Marleau, Nabokov, Boyle, (and possibly Setoguchi, Pavelski, Michalek) are the lone rangers who could get San Jose there in a non-package deal.

From 2005 on, it seems as if the Sharks have drafted well in the early rounds. Vlasic was picked in the second during 05, and while Wishart was dealt to Tampa Bay along with Matt Carle, it resulted in landing Dan Boyle. Couture and Petrecki are well on their way to becoming contributors at the NHL level, as well as providing some interesting mugshot photos: 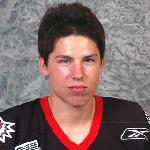 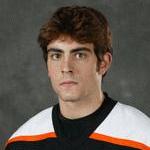 2003 was the most insane draft you'll ever see. Michalek and Bernier for Seabrook and Getzlaf looks mighty good right now.

If you're like me and don't get a chance to watch any of the Sharks prospects on a daily basis, visit Hockey's Future. More discussion on matters of this kind can be found in Morti's initial Fanpost.