UFA of the Day: Alexei Semenov

Share All sharing options for: UFA of the Day: Alexei Semenov 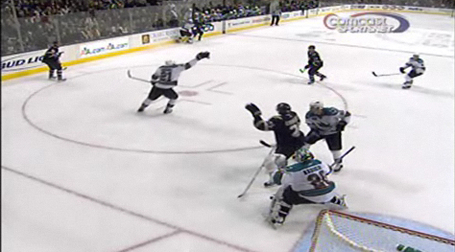 Any Sharks fan worth his salt can reel off a laundry list of grievances against Alexei Semenov. From own-goals to botched passes to dropping the gloves and only picking up a roughing penalty, his time spent in San Jose has been filled with a form of dark humor since the outset. After all, it's pretty hard for a guy standing 6'6 and weighing 235 pounds to blend in.

His career statistics are nothing to write home about. Some have sarcastically promoted him taking part in the shootout, others have nominated him for the Lady Byng. A first star selection last season against the Colorado Avalanche resulted in a public face creaming, and his goal total with San Jose (2) is equal to the amount of times he has put the puck into San Jose's net (unfortunately, that number also stands at 2).

To say the least, the big Russian doesn't have the most prolific of resumes. So what makes Semenov a worthwhile inclusion to wear teal next season?

For starters, San Jose's cap situation is perilously close to the edge. Coupled with the fact that 2008-2009 was the first season management has spent to the max in terms of salary (with nary a postseason result to show for it) and the likelihood of seeing a falling cap in the near future, it becomes paramount that Wilson sign personnel at reasonable prices.

Secondly, Semenov's season wasn't as bad as you may expect. Following his stint on the fourth line in the middle of the year, Alexei turned a new leaf. No longer was he dumping four foot passes into assorted skates and stagnating the breakout- he was hitting the cross-ice feed to the forwards and fueling it. No longer was he emulating Marc-Edouard Vlasic and attempting to poke check the puck away- he was laying on the body and tying up the puck along the boards. No longer was he dishing the puck with nary a forechecker around him- he was skating with the puck, entering an opposing players lane of responsibility, and hitting a streaking winger on the tape.

One thing that also caught my attention was the howitzers Semenov began to unleash from the blueline. They were low, heavy, creating rebounds, and were finding their way on net. I'd never advocate him getting power play time over the likes of Dan Boyle, but some spot duty here and there (a shift or two per game) could be a pleasant surprise. He's not the most mobile defenseman, and McLellan's power play philosophy of driving to the low slot from the blueline may hamper his inclusion, but a heavy shot is a heavy shot. There's always room for that in my eyes.

His official NHL statistics are on the lower end of the spectrum, but were you aware he was the best defenseman in terms of EVGA/60 and had the third best BTN rating on the blueline? Of course I may be cherry-picking here, but the underlying point is not that Alexei Semenov was the best blueliner on the team, nor is it that he will be the face of this franchise. At 28 years old, it's likely that #21 will never be a top four defensemen on an elite team in the NHL.

Funny thing is, that's not what we're looking for. On a team that has a fairly small defensive core not prone to physicality (Blake and Murray being the exceptions), he provides a big body. On a team that will most likely lose Rob Blake within the next two seasons (if not this season), that physical presence will be tested even more. On a team that has cap issues, signing a bottom-pairing defenseman for a hefty contract is illogical. On a team that needs low-priced production in able to compete in the salary cap age, Alexei Semenov has proved he will be able to provide that.