RFA of the Day: Tomas Plihal

Share All sharing options for: RFA of the Day: Tomas Plihal 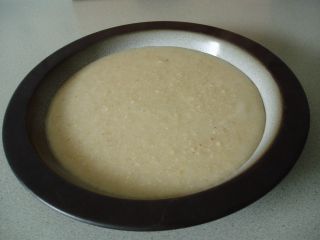 However, Plihal does the quiet things very well, and deserves to be offered a contract next season.

Exhibit A: "The History of Porridge"

Porridge is made of oats, and mixed with water or milk before boiling. It is generally eaten by the working class due to it's low cost and simplicity. In Charles Dickens second novel Oliver Twist, gruel, which is similar to porridge, made a big time appearance. While picking oakum at a workhouse where the boys were underfed and overworked, Oliver famously asked, "Please, sir, I want some more." The snobbish gentlemen running the workhouse denied this request and were extremely angered, but this fact has little, if any, bearing to the contract situation of Tomas Plihal.

Porridge, while not being terribly ambrosial, does provide sustenance. In short, it gets the job done.

Exhibit B: "What Is Required of A Fourth Line Player"

1) Penalty Differential. Taking bad penalties can turn the tides very quickly, and drawing a penalty can inject life into a team. Probably the most important thing to look for in enforcers, and important in analyzing other skaters as well. If a guy is taking stupid penalties and not contributing on the scoresheet, there's not much room for him out there on the ice.

2) Well Roundedness. Does he play on the penalty kill or power play? Also, I'm not sure "roundedness" is even a word, but it works here so we're rolling with it.

3) Statistics. How well does a player keep the puck out of the net when on the ice, and are they contributing on the scoresheet? Are they facing good competition or being thrown out against other non-scoring lines? It's not very likely that our shutdown line will be scoring goals very often, so clamping down on defense and cycling the puck is their utmost priority. That being said, goals from our bottom lines are a huge addition to the team, and could definitely be the difference in a tightly contested series.

As for the statistics found in that piece, I think it's a fair representation of the season considering there were only six games remaining, along with the fact that San Jose was in a bit of injury disarray.

As you can see, out of our lower cast of players, Tomas Plihal was near the top of every statistical category. A real plus in my opinion was his familiarity with the penalty kill, coming in at a solid 1:05 per game. That's not enough to deem him a PK expert by any means, but I am assuming that McLellan isn't going to ride our skill guys (Marleau, Pavelski, Michalek) as hard as he did last season. Marleau led the forwards in shorthanded time last year, and while it was great to see him flourish in that role, I wouldn't mind him seeing less time on that unit. Mitchell's return will help in that regard, but with the general consensus being Mike Grier will move on, Torrey playing a full season (cross your fingers) can be chalked up to a wash.

Plihal's statistics aren't going to warrant much of a pay increase if any, and I doubt many teams are going to be interested in making a run at him. He's a solid depth player and will eat up minutes. With the salary cap situation the way it is, having a league-minimum player with the skill set of Plihal on your roster is essential. Signing him at that level will give San Jose a little more room to maneuver this offseason.

Plank's Final Offer: Plihal isn't going to impress anyone, but his numbers are solid and his salary is manageable. One-two years around $550 K, contingent on the fact that FTF refers to him as "Plihal The Porridge Plugger" for the remainder of his time in San Jose.