RFA of the Day: Ryane Clowe

Share All sharing options for: RFA of the Day: Ryane Clowe 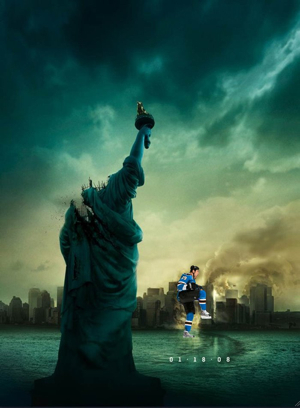 If you had to name one player on the San Jose Sharks who was "born to play hockey," Ryane Clowe is your man. Good height with a solid frame, pretty set of hands, a penchant for getting involved in post-whistle scrums, defends his teammates, fights to the front of the net, and wears his emotions on his sleeve. Truly a treat to watch*.

*Probably my favorite Clowe moment. Number 29 was a machine that series.

He's the type of player any GM in the league would love to have. Unfortunately for the Sharks, it's likely that will be the biggest roadblock Doug Wilson is going to face when attempting to re-sign Cloweverfield in two weeks.

But before we get into the contract side of things, let's revisit what he showed us during 2008-2009. In September I did a Sharks season preview article for The Pensblog. The piece detailed seven reasons to be excited about the upcoming year. Ryane Clowe was my second reason and here's what I had to say:

I'm convinced Detroit's success on the power play centers around Holmstrom's ability to mindf*** the goaltenders every time his rear is hanging in the crease. As much as we hate the guy (don't think you guys are the only one who despise Detroit), his ass gets more press coverage than J-Lo's, and for good reason. He gives opposing netminders more breakdowns than Britney Spears.

Looking at the Sharks roster, there's no one else who can get in front of the net and disrupt the goaltender like Clowe. He was a big contributor in the first-round series against Calgary (4 goals, 4 assists) and established such a solid presence in the crease that it was difficult to fathom how the Sharks managed to post the league's second best record in the regular season without him. His skill set has lots of upsides- 6'2, 225 pounds, and good hands. Expect big things out of him this year, especially on the power play. A twenty five goal season is far from out of the question- in fact it might be a tad conservative.

The one concern with Clowe is his ability to stay healthy. He missed a majority of the regular season with a knee injury, and has never played a complete NHL season. If you're a member of MAAD you may have cause for concern as well- dude picked up a DUI when he was on the IR. But whatevs- do you like drinking? Hell, ya like drinkin', who da hell don't?

If you look at his production throughout the year, a lot of what I had to say rang true. Although he didn't reach the 25 goal threshold I thought he would obtain, he came close with 22. Clowe was also dominate on the power play, tied for the team lead with 11 goals- exactly half of his goal scoring production. He didn't play a complete season, but 71 games isn't a travesty considering the physical edge he brings to the table night in night out.

However, and this is a tad concerning, the end of the year saw a change in the way Clowe was utilized on the ice. Regardless of whether it was a coaching strategy or a decision he made on his own accord, the fact of the matter is Clowe wasn't fighting to the front of the net as much as he used to. In fact, it seemed as if he decided to emulate 07-08 Joe Thornton on the power play, camping out on the sideboards and attempting to flutter centering passes to the crease. Instead of his big frame setting screens and cleaning up the garbage, Pavelski was slated into that role. Whether it was a product of his late season injury (his body wasn't able to sustain the punishment that comes with being in front of the net) or a decision by McLellan (which could have been made due to the injury), it's not a recipe for success moving forward. Ryane Clowe needs to set up shop in the crease for the Sharks to be successful, especially when on the power play.

Another minor liability is his skating. Clowe isn't the most agile of skaters, and when you add in the fact he assumed the role of a playmaker towards the end of the year, it makes you wonder just what is expected of him going forward. If Wilson and McLellan are looking to fit him into that role (a role I'm firmly opposed to), I don't think his proposed price tag is going to be worth it. If you can convince anyone Clowe has the ability to blow by an opposing player in the neutral zone, I suggest you become a politician.

Looking at the current roster, I can only name two players who have the potential to be consistently disruptive in front of the net- Joe Thornton and Ryane Clowe. Even mentioning Thornton is a question mark. McLellan tried to turn him into a hybrid power forward at the beginning of this season with spotty results. He has the size to do it, but behind the net protecting the puck is what made him an elite player. I like Pavelski's grittiness, but his that 5'11 frame isn't going to allow him to withstand a constant barrage of cross-checks over the course of an 82 game season. Cheechoo had some good battles with Pronger towards the end of the year and held his own, but his game is floating between the top of the circles and ripping one-timers. I would lump him in with Pavelski- 82 games of that role and you'll see a less effective player during the postseason.

For a team that needs a presence in front of the net, letting Clowe walk is going to open up a hole the current roster won't be able to fill. The rest of the team either isn't strong enough on their skates, big enough, have the hands to do what Clowe can do in the "dirty" areas. If the offense is going to run through shots from the point like it did last season, bodies need to be in front of the net. That's where Ryane Clowe is at his best.

Therefore, the big question is not whether Clowe is worthy of inclusion onto next year's team, but whether an opposing GM pulls a Kevin Lowe and extends an offer sheet. That question leads to another one- if an offer sheet is extended, how much can Wilson afford to dole out?

Since Clowe is an RFA, here is the compensation San Jose would receive if he signs with another team and the Sharks decide not to match.

*These are last year's figures- if the salary cap drops the numbers would drop, and if it rises then the numbers would rise. With most reports speculating the cap is going to be roughly the same, this should be a good estimate.

An offer sheet above $3.9 would be absolutely asinine in this economic climate, and I doubt anyone not named Glen Sather would throw that sort of dough around- you take the draft picks in that situation. Anything below $2.6 you match the offer sheet. It's between those two where Clowe's likely market value is going to be, and where things will likely get interesting.

Plank's Final Offer: Based on the team's needs, I'm throwing $2.9 M for three-four years at him before July 1st hits. Clowe took up until August to sign last offseason, so I may be running a bit of a risk by letting him test free agency. However, with the salary structure in San Jose the way it is, it's a move I'm forced to make. If he signs we're sitting pretty. If he doesn't, it depends on the offer sheet. I'm trusting that the economic climate, cap uncertainty, and heat Lowe took when he signed Penner will steer teams away from poaching Clowe. Assuming doomsday hits, around $3.5 M is going to be my tipping point for letting him walk. A first round pick would go a long way considering the Sharks don't have much in the coffers at the forward position, and the fact that San Jose has an inability to attract lucrative free agents. On the same token, Pavelski and Setoguchi will be easier to re-sign next offseason where they're due for some raises.