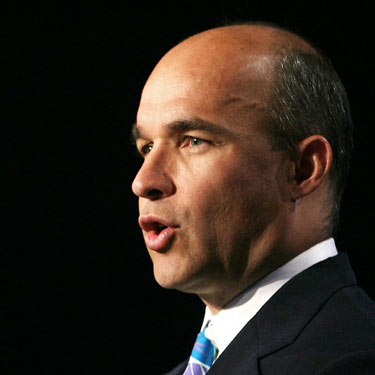 "Let's get our shit disturber on"

Unless you've been living under a rock the last three months, rumblings about the legal issues Phoenix is currently facing have managed to worm their way into your consciousness. James Mirtle of From The Rink has done a bang up job chronicling the ongoing saga this entire offseason, with a recent story explaining fourteen issues the bankruptcy court will need to address before the team is put up for auction on September 10th.

A day in the life of a Coyotes fan must be like waking up to a steaming elephant turd in your living room every single day. About as brutal as it gets.

The man behind it all is Jim Balsillie, co-CEO of Research In Motion, a Canadien company who developed the Blackberry. Balsillie has attempted to slug his way into NHL ownership twice before, first with the Penguins in 2006 and then with the Predators in 2007. In both circumstances, his goal was to eventually move the team to Hamilton, Ontario.

In the case of Phoenix, the likelihood that Balsillie pulls off a "third time's the charm" coup d'etat doesn't look promising. The NHL's board of governors rejected his bid unanimously two weeks ago. Brahm Resnik doesn't like his chances, and Jerry Reinsdorf has reached an agreement with a major creditor of the team.

The issue of creditors clamoring for a return on their investment is obviously the driving point behind the whole fiasco. The question of whether or not the city of Glendale is able to support a franchise (the NHL loaned them money in February) is a major issue for those parties, and the main reason this is being decided in the courts.

Then there's the issue with the arena. In 2003-2004, the franchise signed a 30 year lease with Glendale to play in Jobing.com Arena. The city argues that a breach of this contract (i.e. a relocation) would cause severe damages, and yet the Coyotes have been unable to make their payments- Glendale has essentially allowed the team to use their arena for free the last seven months.

In short, this whole thing stinks to high heaven.

Balsille's proposed bid would move the team to Hamilton and cover nearly 100% of unsecured creditor's investments. Reinsdorf's bid would keep the team in Phoenix, with no guarantee that the team will become financially viable. Is it not the bankruptcy court's obligation to primarily take care of the creditors? Yes, but in the world of professional sports, that answer becomes quite the different story.

The NHL, as with every professional sports league in the United States, is a cartel. Plain and simple.

The advantages of this system are numerous. Public subsidies for arenas are footed by the city (read: taxpayer), and yet the franchise is run as a private enterprise. There is no federal or state governing body playing watchdog. Owners will paint a bleak economic picture by reporting expenses that exceed income, and yet tax benefits are generally not publicized. Investment in a team will allow an owner to offset "on-paper" losses with profits in other businesses they own. There's a reason it's rare to see an owner who solely runs a professional sports franchise- it's not profitable in and of itself.

Although the league has vehemently denied the accusation that the Maple Leafs are attempting to block a second southern Ontario team, the scarcity of competition allows them to charge higher ticket prices, as well as land lucrative television deals. You'd have to be a fool to think that MLSE wouldn't mind a second team cutting into their exorbitant profit margins.

At any rate, Phoenix is a mess. It's a shame the fanbase has taken such a beating, as there are some dedicated folks out there (as Five For Howling will attest to). However, ticket sales have taken a plunge- not surprising considering all the extracurriculars going on this summer, but a bearer of bad news nonetheless.

Make it seven or keep it six?