I Can Make One Phone Call

Share All sharing options for: I Can Make One Phone Call 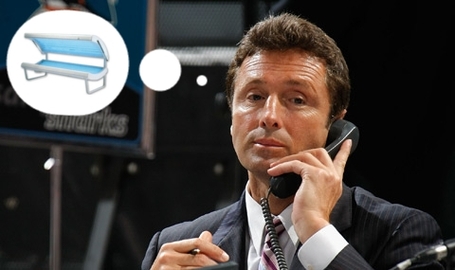 Usually I would provide an introductory paragraph to a piece, but I don't think it will be necessary today (you could also make the case it doesn't deserve one).

If Z95.7 was still around this would make the hot nine at nine. That's a goddamn George Zimmer guarantee.

Song: I Can Make One Phone Call

Are you digging for diamonds via trade possibility?

We've heard the rumors running round town, Cheechoo and Ehrhoff for Heatley

Oh my the cap space is getting tight now

Doug Wilson is biding his time

Doug Wilson wants a winner on the ice

Days, they punch and bleed, into weeks

Months, they trickle by, as you sleep

The summer of 09 has been a tricky sonuvagun

A Presidents Trophy don't mean shit in round one, they went down, they're flailing now in San Jose

Doug Wilson is biding his time

Doug Wilson wants a winner on the ice

Reginald Dustyballs here on behalf of Plank from Fear The Fin. While this song may be a sorry excuse to kill some time during the summer, and frankly sounds like bollocks, the underlying point is clear- actually it's not clear at all. I've not a clue what this lush is trying to say. Hope you enjoyed it.

Purevolume site here for all of your free mp3 downloading needs. I'll be in my trailer smoking a doobie and making out with underaged girls.