Confessions of a Tradeaholic: Is Dany Heatley worth the headache?

Share All sharing options for: Confessions of a Tradeaholic: Is Dany Heatley worth the headache? 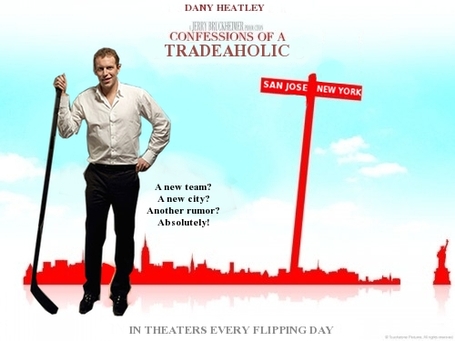 (Note: If you haven't signed up for Fear the Fin's "Night at the Tank" and would like to attend, please sign up here)

Honestly, I didn't even want to discuss this one. I just wanted to photoshop something.

However, there are rumors flying, and they are getting pretty hard to ignore. So I thought I'd give my take on the Heatley saga once and for all.

Cap concerns have been covered in detail, so I'm not going to go over that. I'm not going to discuss the merits of Heatley over Marleau either, because that's been driven into the ground as well. I'm going to simply talk about the plusses and minuses of Heatley: the player, the person, the drama.

Player: There aren't many of knocks that you can make about Heatley the offensive player. He's big, he's fast, and he can score. He's got no problem distributing the puck to open teammates, and he's accurate when he shoots the puck. Of the 28 players who shot more than 250 times In 2008-2009, Heatley's 15.1% success rate is tied for third (with Marleau, LOL). In 2007-2008, he only shot 224 times, but converted at a rate of 18.3%. For his career, Heatley is a 16% shooter. Heatley is also a power play machine, scoring 15 goals (7th in the league) to help make Ottawa's power play its one bright spot on the season.

As far as playoff performance goes, it's a mixed bag. He had a bad playoff series in 2007-2008, when Ottawa (7 seed) was swept by Pittsburgh (2 seed) in the first round. Heatley only scored 1 point (an assist) in the four losses. However, in the year prior, Heatley shared the points lead in the playoffs (His 22 was tied with linemates Alfredsson and Spezza), averaging 1.10 points per game while helping to take his team to the Stanley Cup Finals. The year before, Heatley scored 12 points in 10 games. Of his 10 goals scored in the playoffs, 3 have been game winners.

So for all of the people who argue that Heatley doesn't show in the playoffs, well, that's wrong. He's had one bad year, and two pretty good ones. End of argument.

Sadly, Heatley the defensive player isn't the same star that Heatley the offensive player is. At 6-3, 220, you would think that he would use his size to help him in the defensive zone. Although he has no trouble using his body in front of the opposition's net, he seems to have trouble dominating in his own end. He's not a great checker, and he's often caught out of position. I wouldn't go so far as to call him a liability, but he's not doing his goalie any favors.

Other than the defensive issues though, Heatley is an excellent player with an impressive resume. Oh, and he's only 28 (He won't turn 29 until 2010).

Person: Heatley's character is often criticized, mostly because of an off ice accident. While with the Atlanta Thrashers,  Heatley lost control of his car while driving recklessly, killing his passenger and then teammate Dan Snyder. Although no jail time was served, Heatley pled guilty to second-degree vehicular homicide, driving to fast for conditions, failure to maintain a lane, and speeding He was sentenced to three years probation and significant restrictions on vehicles he could own in the future.

Drama: I don't think I really have to go over the trade demands, because you can only beat a dead horse so much. The trade request is significant, because it's the second such demand he's made in his short NHL career. He's been labeled a diva and a malcontent, but I don't know if that's necessarily fair.

Yes, he alienated his teammates by requesting a trade. Yes, he's being very particular as to what team he is traded to. I'm going to give him a slight pass though... because it's not about the money.

Heatley already has his large contract, and he's going to get paid no matter what team he plays for. The trade demands aren't being levied so that he can cash in on a big deal. Heatley could stay in Ottawa, win or lose, and still get paid.

Heatley wants to be moved for a few reasons. First, he wants to be on a contender. Second he wants to be a leader. Personally, those are two qualities that I want in one of my team's stars. A desire to win and a desire to lead. Although Heatley doesn't have a cup ring, these are two things that I think would be welcome in the San Jose locker room. He's not going to get the "C", but he would play a large role in this team's success. He wants his voice to matter, and it would in San Jose.

Conclusion: I, like I know you are, am sick of all the crap. I'm sick of the back and forth, and I'm sick of the positioning and drama on both sides. But the question is this... would I want Heatley as a player on my team? I've moved back and forth on this for a while, but the answer is yes. I don't know what we'd have to give up, and I don't know what our cap will look like. But if the possibility of adding Heatley was presented to me, I'd act on it.

I assume Doug Wilson is asking himself now.