The Ballad of Jeremy Roenick

Share All sharing options for: The Ballad of Jeremy Roenick 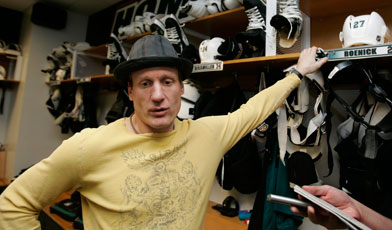 From the wind torn streets of Chicago rose a playing career that spanned three decades, five teams, 513 goals, nine All-Star games, an immortalization in Swingers, and countless controversies. Attempting to summarize the entire portfolio of this noble steed as he rides off into the San Jose sunset would be akin to writing a dissertation on how Gavrilo Princip's decision to eat a sandwich in 1914 led to two world wars- some things are just better left to men of eloquence.

Which is why we're doing the distinguished (and oh so obligatory) top five list.

Alexei Semenov had just tallied two assists in a game against the Avalanche (a career high) and was in the midst of a post-game interview when JR decides that a shoulder injury sustained in December against the Anaheim Ducks wasn't enough to keep him out of the limelight.

As has always been the case when it comes to JR, the intricate off-ice persona he wove in San Jose was an integral part of the skillset he brought to the organization. From mentoring Devin Setoguchi and Torrey Mitchell to yelling at Joe Thornton to put his shirt on during CBC interviews, Roenick has always been a great locker room presence in his time with the Sharks.

An attribute that will be sorely missed.

Although Dan Boyle may disagree, JR was born for television. I've always imagined how good he would have been in Guy Ritchie's Snatch, or as a recurring character on Curb Your Enthusiasm where he befriends Jeff Green and helps get him in shape in order to avoid the f-bomb laced tirades of his wife Susie.

Regardless, whether it's in the broadcast booth or on the big screen, "Styles" won't be off the radar for long.

In 2007-2008 JR scored 14 goals. 10 of those were game winners in regulation, which put him second in the league behind Alex Ovechkin.

As we'll touch on later, Roenick showed up when it mattered most.

Waiting for his teammates to get to the neutral zone in order to start a line change, JR dumps the puck in. As it careens off the sideboards, Alex Auld (who had come out to play the puck) watches it take a funny bounce and knocks it into the net to cement JR as the third American to score 500.

The strangest goal I have ever seen, and probably the strangest milestone goal in the history of the NHL. For JR, it's only fitting.

The first home game seven in franchise history, an entire season riding on the line. After being shutout in Calgary, the Sharks were looking for any answer they could find.

A healthy scratch in game six, JR came out of the gates like a bull with his balls tied up with economy strength nylon rope. On the power play he picks up an assist to put the Sharks up 1-0. The Flames rebound with two unanswered goals. A lesser man would have fell apart like soggy kleenex on a winter night. Not JR. He floats one from the top of the blueline to beat Kipper five hole, and comes right back three minutes later to put in his own rebound and effectively blow open the floodgates.

At the end of the night, Roenick had notched two goals, two assists, and broken a franchise record for most points in a playoff game (a record that still stands today).

JR's official announcement is scheduled for 11 PM on Thursday, and will be broadcast live on various outlets.

Thanks for all the memories sir.