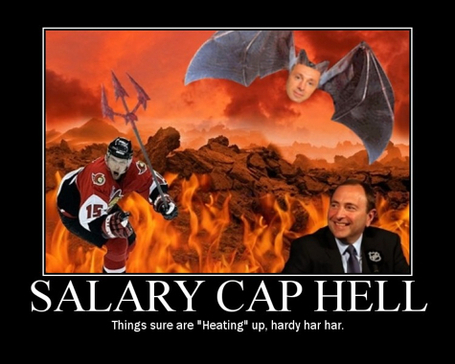 The Ottawa Sun is reporting (with Eklund esque certainty I may add) that disgruntled All-Star winger Dany Heatley will be landing in San Jose within the next 48 hours.

Cue whatever feeling you feel is appropriate.

A lot of people are speculating what exactly Wilson is going to be giving up in order to land Heatley, waiting with bated breath and eager eyes to see if he can pull off the likes of a Joe Thornton heist one more time. Whether it's an updated version of the proposed deal of Cheechoo and Ehrhoff, involves three teams, or "something really cool I don't even know about yet", the question I pose to you today is this- does it even matter?

San Jose isn't the same organization it was in November of 2005. The salary cap wasn't an issue then- last season was the first time management spent to the cap. We've been beating the upcoming financial issues since March, touched upon it again at the beginning of free agency... frankly, it's become old hat, a tired and vexing exercise.

Which makes the inclusion of Dany Heatley all the more interesting. He's a potential sixty goal player alongside Thornton. He also comes in with a hefty $7.5 M cap hit.

Getting back to the original point- the cost DW will have to pay in order to bring Heatley to San Jose. Assuming the Ottawa Sun's report is true, and Jamie McGinn finds a full time role with the team next season, the Sharks sit $7.2 M over the cap with two forwards and a goaltender needing to be re-signed. Not exactly the best place to be in terms of salary structure, but it's workable right? Yes and no.

Personnel will obviously need to be moved in order to land Heatley, which puts a bullet into Wilson's ability to compose a 22 man roster- moving Cheechoo, Ehrhoff etc. is a double edged sword in that the cap space saved results in more players needing to be brought in. Although Cheechew at Battle of California believes DW is one move away, the numbers just don't add up. More resources will need to be moved after a Heatley deal, and those resources will result in a further depletion of the lower lines and San Jose's youth.

This is where the proverbial shit hits the fan. The Sharks minor league system is completely devoid of a goal scoring forward. Coupled with the fact that the organization is absolutely unable to land a marquee free agent, any forward who is moved will open up a hole in that department. Take Michalek for example. Maybe you plug that hole with Marleau for this season, but banking on him to take a severe pay cut with Pavelski and Setoguchi getting raises/the cap sinking like a stone in the sea next season is pure speculation at best. Then do you move Marleau instead for prospects/picks in order to offset the lack of depth Heatley's $7.5 M contract will cause? Moving Patty allows you to retool on the fly and balance out your scoring, moving Michalek for bottom line players essentially means that DW is going for broke this year at the expense of the future. No team is going to give up multiple potential top six players for Michalek to a team fighting to get under the cap.

The fact is, no matter what San Jose gives up in the Heatley deal, more players will need to be moved. Important players, players that provide depth, players that are young, players that the organization will be looking for one year from now. Players that many members here have defended all throughout this offseason.

It's like a goddamn R.L. Stine Choose Your Own Adventure novel. And I know I already finished mine.