The Morning After: Marleau Remains A Shark

Share All sharing options for: The Morning After: Marleau Remains A Shark 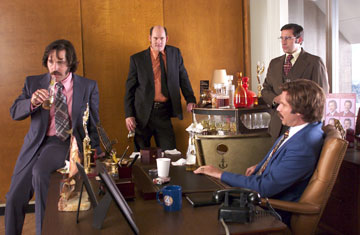 With John Buccigross likely in a safehouse or with a relative somewhere, let's take brief look at the events that transpired yesterday:

I've got a couple points I'd like to make about the whole situation, as well as expound upon some ideas I mentioned in the live blog TCY and I were frantically attempting to run yesterday. Hit the jump for more.

There's so many possibilities as to how this all went down, it's almost a fool's errand to try and uncover what exactly happened- all three general manager's denied the trade was legitimate, Darren Dreger of TSN cited sources that said nothing was ever close, and Michael Russo of the Star Tribune stated that two of the teams involved hadn't even spoken for two and a half weeks. But why would John Buccigross, the most respected and informed hockey journalist ESPN has to offer, conjure something out of thin air? I trust him as a news source, partially because he provides a passionate take on the game and partially because he's not known for rumor mongering; there's nothing Eklund about him. I believe his source existed, even if the information turned out to be false- I don't see any other reason he would do such a thing.

Getting back to the initial point though- the circumstances surrounding the deal. Mind you all of this is complete speculation, but I think it's safe to assume everything involving Mr. Heatley from here on out should never be considered more than such.

1) Clout with the journalistic community and fans. Dany Heatley has been making headlines along with Jim Balsillie and the Phoenix Coyotes all offseason long- no other stories (besides Patrick Kane's ill-advised cab ride, which will amount to nothing more than a vestige of Crazy Taxi jokes by October 1st) even come close. If Buccigross comes in and makes breaking news by reporting the Heatley deal with certainty before any other respected news source sniffs it, he's immediately gained major recognition and will be lauded as the guy who, "broke the big deal." That seems to be important to a lot of people (fans and writers alike), and could have caused him to take a source that wasn't air-tight and say, "Screw it, I'm going all in". Essentially he's going to sit on the same quality of information if it involves a swap of Aaron Ward for Patrick Eaves. There's no need to swing for the fences in that situation.

2) It was one waived NTC away. Doug Wilson goes to Patrick Marleau and doesn't specifically ask him to waive his no trade clause- instead he gets creative and sees if Marleau would be okay with having his name thrown around in some potential deals. Marleau says he's quite alright with that, which eventually leads Wilson into a conversation with Dean Lombardi and Bryan Murray. The three general manager's compose a deal and Buccigross' source calls him with the tip; unbeknownst to both of them, Marleau has not officially waived his NTC. Wilson calls Marleau to inform him of the deal, which after some deliberation leads to a rejection of the offer.

Now you've got the same situation that occurred with Edmonton earlier this summer- a deal leaks before the applicable NTC/NMC's are waived, a player involved refuses to be traded, and an organization is left with egg on it's face as well as several players who realize they may not be as integral to the team as they initially thought. So what do the GM's do? Damage control. Lombardi, Wilson, and Murray get on the phone together and agree to protect their current assets- deny, deny, deny, right down the line.

3) So why would Patrick Marleau hypothetically refuse to waive his NTC? There's many potential reasons, although I want to stress this is the purest of speculation. For starters, he is comfortable in San Jose, playing here his entire career since breaking into the league in 1997. By all accounts he loves the city and wants nothing more than to succeed with the Sharks. He held the Captaincy for five years. He's the franchise leader in nearly every offensive category. His wife is from San Jose and they just had their second child last season- it's possible he does not want to uproot his family at all, especially considering the season is less than a month away. The list literally goes on and on.

One point I do want to make is this- Evgeni Nabokov has previously stated (in respect to his NTC), "If the organization wants me to leave, I will leave... I would never stay with an organization that didn’t want me." Patrick Marleau has done no such thing. If a Mats Sundin esque situation occurs where it becomes public that Marleau did in fact use his NTC to block a deal, and a public outcry from the fanbase ensues, I will hang my head in shame. Patrick Marleau earned that clause in his contract. Period.

4) Marleau's ties to Los Angeles. There's a lot of speculation as to why San Jose would deal their former Captain within the division, and my only answer would be that it's the only avenue left for Doug Wilson to land Heatley. LA is close enough to San Jose where family life wouldn't be vastly affected by the move, and while I'm completely unaware of the relationship Dean Lombardi and Patrick Marleau currently share, he was the Sharks GM from 1996-2003; during this time he drafted Marleau. Signing Marleau to an extension is the only way this move makes sense for LA, because they're not one piece away from being a bona-fide Cup contender and would be giving up two good young players in the process.

During the 2007-2008 season a whirlwind of trade rumors and rumblings of differences with then head coach Ron Wilson led Marleau to post a paltry 19 goals and 48 points. This offseason has been no different, and it's arguably been worse. Doug Wilson has yet to come out and state that he is "safe", unlike the public vote of confidence he gave to Joe Thornton and Dan Boyle. Marleau was stripped of the Captaincy in mid-August, is not present on this season's tickets, and has been unfairly branded the poster child for San Jose's lack of postseason success. Now he's been named in a questionably factual high profile trade that made waves across the entire NHL just before training camp is set to begin.

Standing alone, each of those situations could be easily shrugged off. But together? In three months time? This is nothing short of a public humiliation in my eyes, a sign that the organization is attempting to bull their way in a different direction.

If you are Patrick Marleau would you want to play in San Jose under these circumstances? Two years ago you felt alienated and your on-ice performance suffered, only improving once the trade deadline had passed and the public's eye turned towards winning games instead of "heart" and "vocal leadership." This season those attributes will be the sole focus, born of a disappointing first round loss after winning the Presidents Trophy in yet another successful regular season. If you are Patrick Marleau do you re-sign with this franchise? It has been the only home you have ever known, but what has management done to make you feel welcome in that home heading into a contract negotiation year? Absolutely nothing. Nothing at all. You have been quietly and covertly dragged through the mud.

For the first time this offseason I'm straying from the assertion that Patrick Marleau should wear teal next season. He shouldn't. Not because of his on-ice performance, not because of the bullshit excuse he doesn't have leadership capabilities, not because he doesn't have heart, grit, guts, or any other goddamn intangible that is so easy to measure from section 227 while you're sucking down a fucking soda.

It's because this organization has lost faith in him. And when management doesn't believe in Patrick Marleau, I don't think he believes in himself.