Spotlight's on That McGinn Kid

Share All sharing options for: Spotlight's on That McGinn Kid

[Editor's Note]: I'll have a much more in-depth look at the entire roster as the season draws near (Fear The Fin is scheduled for our SBN-wide Season Previews on September 27th), but for today let's take a quick look at the team. 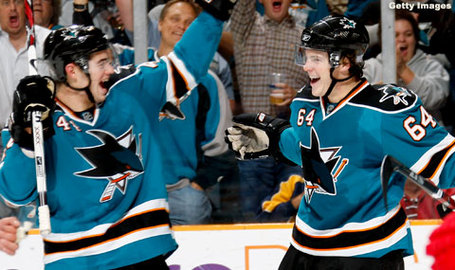 The top six of San Jose is going to be lights out this season. At the risk of repeating myself (crisis not averted) Heatley is a potential 60 goal scorer alongside Big Joe, and it wouldn't surprise me to see both of them make a run at the Rocket Richard and Art Ross. Setoguchi frees up enough space for himself with his lateral skating, and that space is going to grow exponentially larger once teams figure out that the left circle is where dreams go to die. He's probably good for another 30 goals this season, and at first glance I think you're going to see 100 out of the top line barring a catastrophic yoga injury. Damn downward dog could be the end of us all.

Then you've got Marleau, Pavelski, and Clowe. One guy who's got pure talent, one guy who thrives off his hockey IQ, and one guy who's a wrecking crew as long as he stays away from those damn sideboards he grew fond of late last season. I don't think Marleau puts as many pucks in the net as he did in 08-09, but I probably won't care- in a perfect world McLellan pairs these guys up against opposing team's top forward lines for about 60-75% of the night at The Tank. Patty and Pavs are both top twenty two way forwards in the league today, and should be able to play line one of team X to at least a wash every single night. Now you've got Thornton & Company to clean up against some competition that's going to have issues keeping them in the defensive zone, with little effect on their minutes. Sounds like a plan to me.

After that though you run into a portion of the team I like to call the "don't get all hot and bothered just yet" lines. The bottom guys (Shelley, Nichol, training camp winner) won't be a goal scoring threat, but Nichol played enough on the PK last year with Nashville where the hope is that he can be defensively responsible and not take too many penalties. I've said this before, but I don't think Staubitz is going to be a good fit here considering Nichol fulfills the role of junkyard dog on the team- both guys are known for taking their fair share of penalties, and there's no need for that considering the amount of ice time they're going to be getting. Keep him in Worcester and groom him to take over for Shelley next season*.

*This might be tough with the cap situation though. Didn't take too much time to crunch the numbers, but it would be tight.

Then there's line three. I mentioned this last night, but Mitchell's injury has me concerned given the nature of his game- take away his speed via a recurring injury and he's not nearly as effective. He's not sure if he'll see any preseason time and isn't skating. Not the biggest guy of the bunch either, and while he threw his body around admirably in the four postseason games he played last year, that's not close to holding up during an eighty two game season. He battled an injury all last year, had his return date consistently being pushed back until the playoffs last year, couldn't get 100% after three months of rehab, and still contains lingering issues. I’m not penciling him in until he’s penciled in, and wouldn't be surprised to see Couture on the ice October 1st. Best case it doesn't happen and Logan gets some opportunity to grow his game in the AHL this season, but I'm not holding my breath.

If Couture replaces Mitchell I think he'll do fine, but obviously that's entirely speculation considering he hasn't played at the professional level yet. Throwing out projected performance predictions (read: haphazard guesses) based off a rookie game (he sucks!) or training camp (next Gretzky!) will only make me look like a jackass down the line, so I suppose I'll just try and hide that for the time being.

Anyways, that leaves us with Jamie McGinn. His stint with the big club last year proved that he's a worthy inclusion onto the roster, and his statistics with Worcester last season show that he can put the puck in the net (he had four last year with the big club in 35 GP). He's got some nice speed out there on the wing- not a guy who's really going to blow by defenses per say, but enough where they're going to have to be honest and be think twice about pinching. He goes to the corners hard and was a tireless worker too- always a good trait to have.

At any rate, Jamie McGinn is my key to success because if he falters and doesn't produce those lower lines are going to be mighty light in the goal scoring department, especially with all the uncertainty surrounding Mitchell. Scoring depth was an issue last season and did San Jose no favors in the playoffs. His line is going to see some pretty easy competition considering the amount of attention the top six is going to get, and the hope is that they can capitalize on it so we're not relying on 100% of the forwards production to come from the top six- that's a gamble, and against a great defensive team like Calgary (Bouw, Regehr as your obligatory shutdown pairs) it's a crapshoot on whether it pans out.