The Ice At HP Pavilion

Share All sharing options for: The Ice At HP Pavilion 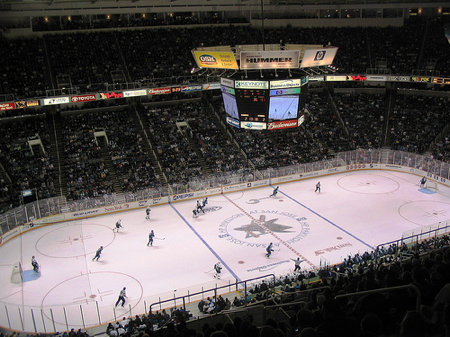 Soft and slow, oh HP Pavilion how I love you so

HP Pavilion has always had notoriously terrible ice, and this past season was no different. I've exchanged some fisticuffs over the importance of this issue on multiple occasions- since I'm out of town and said persons can't yell at me for being firmly entrenched in my opinion, I'm comfortable with leaving it up to a poll.

First off, a little history on the ice conditions in San Jose. HP Pavilion is a very active building, housing roughly 200 events each year. The Sharks used to share the floor with the San Jose Stealth (an indoor lacrosse organization that moved to Washington this summer), and would occasionally play games the night after these games. The problem with the ice can be attributed to many things, but most notably: a) the fact that San Jose generally sees temperatures in the 70 degree range during the beginning and tail end of the season b) with multiple events occurring near game time, you have a lot of non-game wear on the surface and opening of the arena service doors, as well as c) the culmination of the above two things leading to a situation where ice is being frozen and refrozen, resulting in impurities being brought to the surface*.

*I'm not sure what the average is at HP Pavilion, but the NHL recommends 60 degrees and 40% humidity during hockey games.

I doubt I can find a single Sharks fan who is consistently happy with the ice conditions in HP Pavilion. It's a topic of post-game discussion for my friends and I probably ten games a year. However, this is not a call for the ice making staff to be held solely responsible for the situation- ice quality is an issue across the NHL in many cities (specifically warm weather ones), with the Verizon Center in DC being another arena that has received criticism for their product. 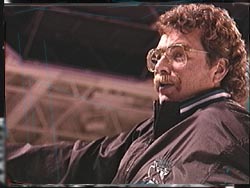 Ice Making and Lovemaking: The Ballad of Bruce Tharaldson

I also am aware that both teams have to play on the surface during the course of a given tilt, which in theory should nullify all of the effects the ice surface has on the respective teams. That has been the argument I've heard over the years, and it seems to be one that people are very convinced of.

Take a look at the general makeup of the Sharks. Skilled guys, most being good skaters. One of the fastest teams in the league, and filled with members who can move the puck well in the passing game. With poor ice conditions however, now you're taking away that advantage. Joe Thornton isn't able to thread the needle because the snow is changing the course of his pass. Patrick Marleau isn't going to hit the near side top corner because he can't get the puck on edge. Devin Setoguchi isn't able to cut to the middle and drag a couple defenders with him to open up the right side because he's going to lose an edge trying to make a cut on what amounts to a Slurpee by the end of the third. A large portion of San Jose's game centers around hitting a forward with a breakout pass between the circles- if there's no confidence in making that feed because it might bounce and result in an offensive zone turnover, now you're clearing the puck up the boards and slowing the game down. The team's personnel is built on speed and pushing the envelope, not mucking around and grinding it out. Professional sports is about finding every advantage you can and playing to your strengths. Soft ice does nothing to help the Sharks execute that game plan.

For all you casual blowhards who just watch hockey because the Niners suck, here's something you will understand. A game at Lambeau Field in December, filled with snow and wind. A good passing team comes to town, a team that likes to put the ball down the field, goes up against the Packers who like to run the ball a lot because Dorsey Levens is a workhorse. Even though both squads are dealing with the same field conditions, the running team is going to have an advantage because they don't have to deal with the wind.

Playing conditions affect both teams, but do so at varying degrees of importance. A slow team with a great blueline isn't going to complain about the ice surface as much as a fast team with a great top-six will. They have two different game plans and skill sets. One wants to slow it down and play dump and chase, the other wants to speed it up and carry the puck over the blueline. Assuming that by entering an outside variable into the equation won't change anything in this regard seems haphazard to me. Is it a defining factor in the win/loss column every night? Not at all. But just because it doesn't always show up on the scoreboard doesn't mean it won't have an affect on the game.

Maybe I'm the only one who feels this way, and maybe I'm the only one who cares. In my opinion it's a damn shame to see professional athletes have to compete on that surface 41 nights a year. The risk of injury (specifically groin) is increased, and the level of play takes a hit as well. I hope that the Stealth's move to Washington leads to an improvement in ice quality, but I'm not holding my breath- playing in a warm weather climate will likely cause this to be an issue that remains for seasons to come.