Share All sharing options for: Nabokov's Mask Broken Down 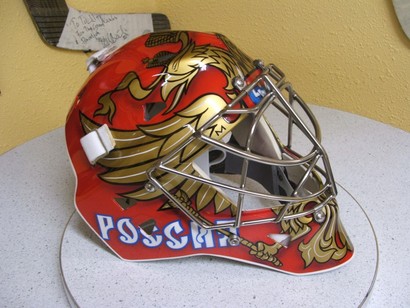 As pointed earlier by Mr. Plank in his fanpost, with the help of Bay Area Sports Blog we get to take a first look at Evgeni Nabokov's goalie mask designed by Todd Miska for the upcoming Winter Olympics.  As many fans would wonder about the meaning of imagery, as your special FTF Russian correspondent, I'm here to exlusively break it down for you.

The first thing that hits your eye are the letters unknown to most of you, but it doesn't take an advanced college degree in Slavic languages to guess that "Россия" stands for "Russia".

The red color should also be self-explanatory. Not only has USSR/Russia never played hockey in any other colors, with recent resurgence of national pride, all Russian uniforms in all sports are now back to wearing red. Blue color that some teams used to wear (for instance, soccer team) signified change during Yeltsin's era, and now that the collapse of Soviet Union is considered a tragedy, red is again starting to dominate national colors. What I find interesting is that it's quite a departure from the colorful mask that Nabokov spotted four years ago in Torino - must be Kremlin's orders.

The next thing we see is the bald two headed crowned eagle. There is no surprise here either, as this is the official Coat of Arms for Russia that dates as far back as 15th century. That symbol was not used during the era of Communism, but Yeltsin ressurected it back in 1993 under his new regime.

As a Russian, I'm glad that Nabokov chose these symbols for his goalie mask and he apparently is pleased with the work. We take great pride in accomplishments of our athletes, and the country is never as united as it is during the Olympics. However, I almost feel that Nabby took too conservative of an approach, because this imagery doesn't have a lot of his personality on it and is very predictable. In fact, it will not surprise me if all three Russian goalies have the same imagery on their masks. Maybe there is more in the back that we can't see? But if that mask stops Canada or USA in the final in Vancouver, I suppose who cares?