Share All sharing options for: Breaking Down Vlasic's Injury

It is my belief that Marc-Edouard Vlasic was injured during his last shift of the first period against the Chicago Blackhawks on Thursday, and Swisher's earlier source was correct-- it is a knee injury. How severe, I cannot say, but I am comfortable making that assertion due to the particulars of the play. What particulars you ask?

Let's hop in Fear The Fin's state-of-the-art War Room and find out. Apologies for the low quality of the pictures, as Photobooth can only go far in analyzing these types of things. If anyone has video of the last 1:15 of the first period against Chicago (likely someone with Gamecenter online who is familiar with uploading videos to Youtube), we would appreciate you providing a link in the comments section. 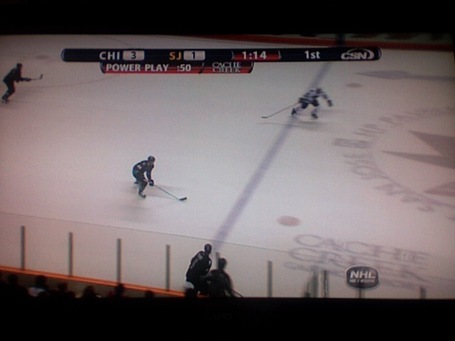 With 1:14 left in the third period, Vlasic takes the puck up the ice towards the Blackhawks zone. He eventually dumps it in, engaging with Blackhawks defenseman Niklas Hjalmarsson in the middle of the circle. 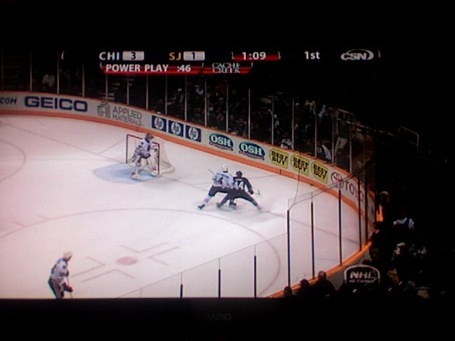 Hjalmarsson does what any defenseman worth his salt would do and runs a little casual interference on the forechecker. Unfortunately for Vlasic, he gets a case of Cheechooitis and spreads out his center of gravity when his legs get too wide. At this point, he's either hitting the ice or going along for whatever ride Hjalmarsson wants to take him on. 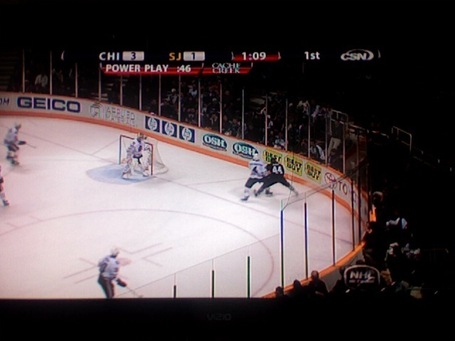 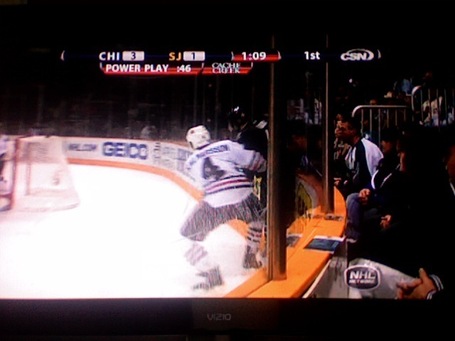 This is where Hjalmarsson rides Vlasic into the boards-- from what I can gather from the video replay, Vlasic's knees locked up right as he was preparing to hit the plexiglass. In my opinion (mind you, I'm no doctor), the combination of that and the force in which he hits the boards (not overly hard, but definitely hard enough, especially when your knees are locked) make it more likely he's dealing with a knee injury compared to something like a tweaked groin. Also notice Hjalmarsson's right leg-- it's hard to tell from the picture, but it is square on Vlasic's knee cap. To get Vlasic into this position (reference picture 3 in the series), Hjalmarsson spins backwards, causing Vlasic to essentially pivot solely on his right leg. This makes his left knee even more susceptible to injury. 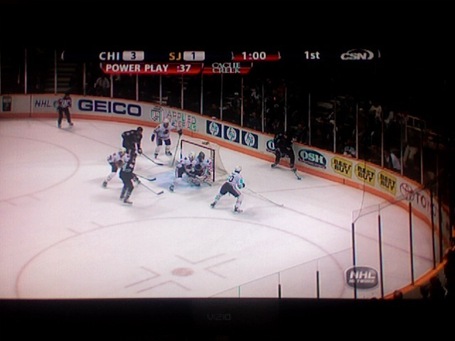 Vlasic manages to work his way to the front of the net afterwards, and although a still photo won't show you this, he gets bodied around a bit and looks slightly uncomfortable.

The next two photos show Vlasic heading back to the bench-- he is in the upper right hand corner of your screen, alongside the CSN logo. As you can see, he is dragging his left leg as to avoid putting weight on it. 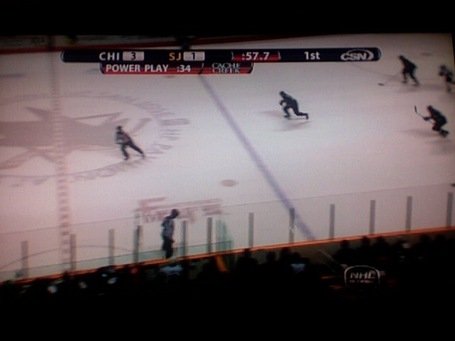 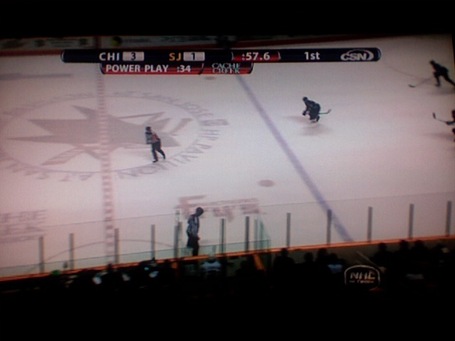 Notice the time on the clock at this point-- 57.7 seconds remain, and Vlasic is at the top of the faceoff circle closest to the benches. We now jump forward ten seconds, when Patrick Marleau is carrying the puck up the ice. 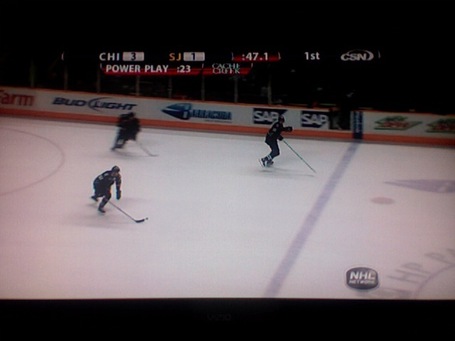 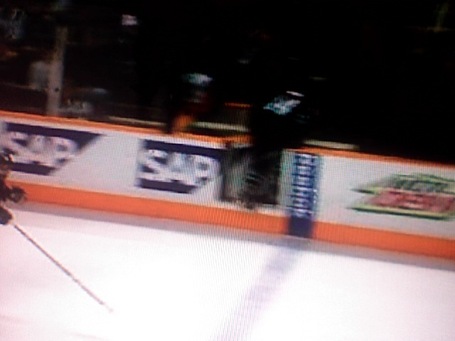 The second photo is an enlarged version of the first one, apologies for the low quality.

As the clock shows, Vlasic has now taken ten seconds to get from the top of the offensive zone faceoff circle to the San Jose bench, an unusually long line change especially considering the situation-- San Jose wants to rush the puck up the ice in order to get in one last attack before the period ends; therefore, Vlasic would be hauling his butt back to the bench since he would not expect Marleau (who has possession) to hold the puck behind Nabokov in order to complete a line change.

Once again, a still shot doesn't reveal as much as video, but it is clear that Vlasic is keeping his weight off his left leg, the same one that Hjalmarsson exposed on the initial dump-in play (where I suspect Vlasic was hurt). He pulls himself up onto the bench with his upper body, and visibly limps onto the bench afterwards. This occurs in roughly one second of live time, making a conclusion fairly difficult to gauge considering what I had to work with, but coupled with the other exhibits and the fact that he failed to return to the game, I think it is fairly safe to say that this is a left knee injury.

How severe? Who knows at this point. David Pollak of Working The Corners is reporting that Vlasic did not practice today and is questionable for Saturday.

For the sake of this hockey club, let's hope it's nothing more than that.