22 Reasons Dan Boyle Is Better Than You

Share All sharing options for: 22 Reasons Dan Boyle Is Better Than You

1) He went from an undrafted, unheralded, underappreciated defenseman out of Miami University, to a member of the 2010 Canadian Olympic team. You know, the team that will be playing in the biggest Games the country has ever taken part in.

3) His skating ability is proof that there is a higher being. Rumor has it that Boyle can skate on unfrozen water as well, although that has been uncomfirmed.

4) The reason why it's been uncomfirmed? Watching Boyle perform miracles opens a wormhole that sends the user to a parallel universe where trees are made of cotton candy and the Stanley Cup in San Jose isn't an epic myth. Can you imagine?

6) Instead of rubber duckies, Boyle bathes with the Lernaean Hydra.

7) Instead of the Lernaean Hydra, Boyle sometimes chooses to bathe with whatever the fuck he wants to bathe with. He's Dan Fucking Boyle.

9) During game one of the Stanley Cup Finals with Tampa Bay in 2004 an electrical fire torched his home, causing an estimated $300,000 in damages. Boyle went on to win the Stanley Cup six games later.

10) In following years, Boyle flipped the big middle finger to Thomas Edison and channeled his inner Cole MacGrath by powering his own home with the electricity found in his skates (saving some major coin in the process). Did we already allude to the fact that this guy's skating is electric? Yes? Okay then, just making sure we're on the same page.

11) Boyle has caused many a heterosexual male to question his commitment to the opposite sex, most notably following playoff games.

12) He's been in the top ten every year for defenseman scoring since the lockout, barring the season he was sidelined with a freak injury.

13) Although unreported at the time, the skate that fell on his right wrist disintegrated upon impact. It's ashes are the most valuable commodity on Earth, regularly trading on the open market for 6.66 trillion dollars per ounce.

14) In the time that you have read this article, he has likely solved world peace and bought some Pop-Tarts at the local grocery store. 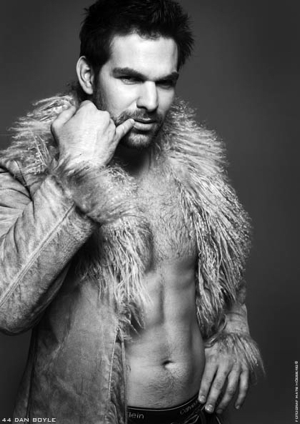 Seriously though, Mike "The Situation" from Jersey Shore looks like a twelve year old in comparison.

15-22 rendered irrelevant following said picture. I'm going to pick up an orange mocha frappuccino now. And to all the lovely ladies who say that FTF is filled with too much testosterone, consider this your year long subscription paid in full.