Sharks Gameday: Where in the world is Jamie McGinn?

Share All sharing options for: Sharks Gameday: Where in the world is Jamie McGinn?

Easy. He's either in San Jose, or Worcester. I bet he's getting all too familiar with this terminal. 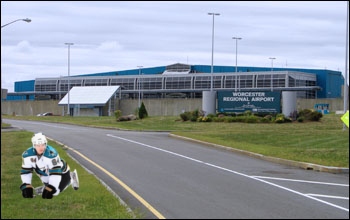 Seriously, though. Check out the .gif on the Worcester Regional Airport Website. It's like a montage of McGinn's life. Plane lands, outside of terminal, Hertz station. Back at airport, plane boards, plane takes off. Lather, rinse, repeat. Classic.

Hey, I know that this has been a topic rehashed over and over again. But let's suppose that McGinn flew between San Jose and Worcester every time he was recalled or demoted (that wasn't the case when the Sharks were on their East Coast bender). That's 70 total miles of driving between the arenas and the airports, and 49,200 air miles.

I'd rather talk about McGinn. Why? Because the Sharks just came off an eight game winning streak, so it's ridiculous to pull the Chicken Little routine. Yes, there are issues that need to be addressed, but there's no point in a mid-season examination until after the Olympics. (It's also quarterly time at work, and my analytical side is fried)

Those miles are enough to fly San Jose to Sydney, Australia. Round trip. Three times. Or, you know, once if you're bringin' a honey. I assume McGinn would. Then he'd jet over to Japan with her and show her how big of a deal he is over there. Baller.

He could fly to San Jose to San Jose, Costa Rica (a possibility for my upcoming honeymoon) 8 times round trip. Belize (another considered location for my new fiance and I)? 10 times.

If he's got a little Lance Bass in him (I know how that sounds...meh, I'll stick with it), he'd be happy to know that he could be 20% of his way to the moon. Who knows how far he could make it by seasons end!

Point is, this is a ridiculous situation any way you slice it.

The other point? The rookies are a huge part of this team, though you wouldn't know it by all the call ups and send downs. The play of McGinn, Demers and Co. have been and will be a significant factor in whatever type of success the Sharks have this year. It sucks that we have to treat them this way.

Oh, and last point. Jamie- If you're feeling generous with your frequent flier miles, shoot a few my way. Honeymoons aint cheap.

Prediction: Sharks win 6-2. Goals by six different Sharks in the win. Thornton, Marleau, Boyle, Heatley, McGinn and Setoguchi. Vlasic assists on the first four goals in the first two periods. Seto scores on a giveaway by Mason (who is pulled in the second intermission), and McGinn steals from veteran defenseman Mike Weaver and slides one past rookie netminder Ben Bishop 0:14 into the third period. Nabokov has 45 saves in the win.