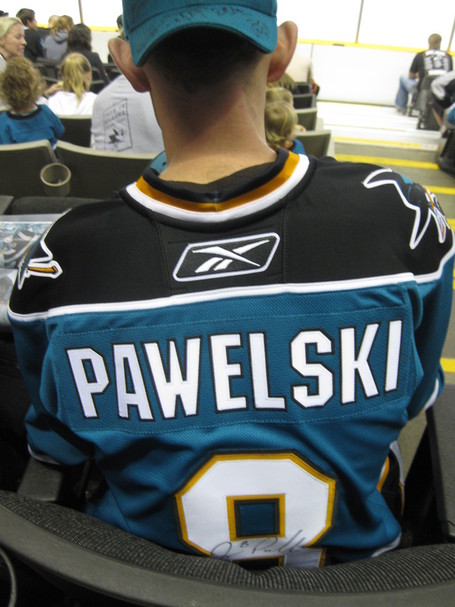 Autographed by Joe Pawelski himself.

[UPDATE] Apologies are in order I suppose =

Ok... first off you have an image of my boyfriend and his jersey on here.  And listen up... if you were a TRUE Sharks fan and actually knew stuff about the players and watched Shark Byte... you would know that Joe Pavelski's last name is truly spelled Pawelski.... He's Polish and his Grandfather changed it when he came to the United States so he could seem more "Americanized".  So instead of hating on someone's heritage and the CORRECT spelling of his last name, do some freaking research.  And when my boyfriend, who is freaking POLISH!!! got Joe to sign it he thought it was awesome and completely flattering.  Get educated and stop making assumptions.  People personalize their jerseys for a reason. GROW UP!

Can't promise anything on that last part, but rest assured we're not declaring anyone to be foolish - it's in the eye of the beholder.  I'm leaving the image up, however, as a warning to all and sundry = appearances can be deceiving.

However, as a Danish-Norwegian-Dutch-Czech-French-Irish-Austrian-German-Polish-American (seriously), I wouldn't ever consider "hating on someone's heritage."  Lech Walesa, in the house.

We here at Fear the Fin are big fans of Jersey Fouls over at Puck Daddy, which chronicles the existence of shockingly horrendous - and humorous - personalized jerseys, from the handmade Ovechkin NY Rangers atrocity to the slightly more heartwarming bride and groom pairing.

In fact, we're such big fans that we (ok - it was me) have found ourselves chasing suspected fouls into the restroom, just to secure that photographic evidence of a $200 investment gone awry.  I still have dents in my forehead from the bevy of purses that landed in protest...

As Al Murray would say, "The point is this" = we're hosting a Sharks-specific Jersey Fouls, right here at FTF.

Lest you think we're bordering on copyright infringement, here's Greg Wyshynski's (damn I hope I spelled that right) nod of approval =

Jersey Fouls must spread like herpes. Place them on your blog, and let the magic happen, good sir.

...He says after rejecting my submissions.... sniff.

San Jose fans have been spotted in the field wearing God-knows-what-compelled-them jersey monstrosities - and we love them for that.  We've got our own McLovin 69 jerseys, our own Franken-jerseys, and our own 420 shoutouts.  But they're our OWN, dammit - and we're going to give them their proper spot in the limelight.

Should you recognize yourself in this collection of teal trash, don't worry = we're not questioning your fandom, we're simply laughing with you, while simultaneously emailing the pic to someone else who can laugh AT you, you poor sonuvagun.

If you're unsure of what constitutes a Jersey Foul, head over Wysh's way - otherwise, take a look at the above example (EGAD) before taking the jump.

Got a Sharks Jersey Foul image?  Email it to fearthefin@gmail.com. 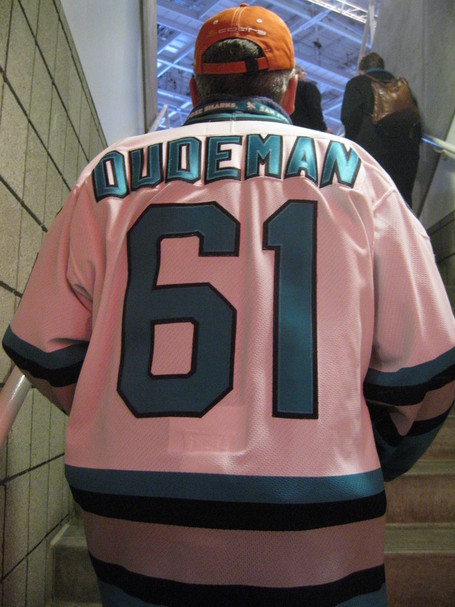 Dudeman happens to be my uncle, and I'm leading off with this fairly innocuous one to encourage you all to get Orwellian and turn your loved ones in.  It's so much more fun that way.  Hell, turn yourself in while you're at it. 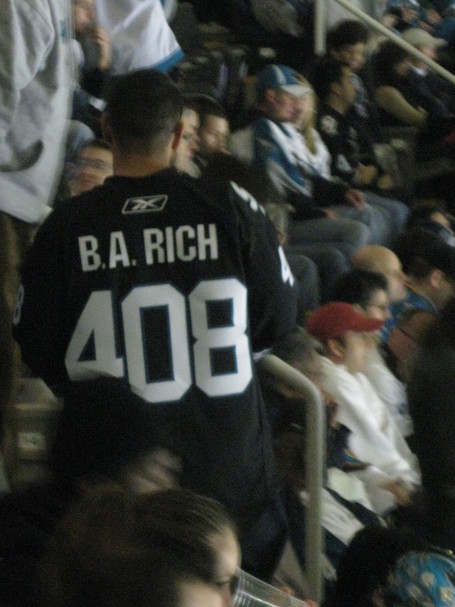 If you're a non-Californian Sharks fan, that translates to "Bay Area Richard" with the telephone area code for San Jose.  Represent, yo. 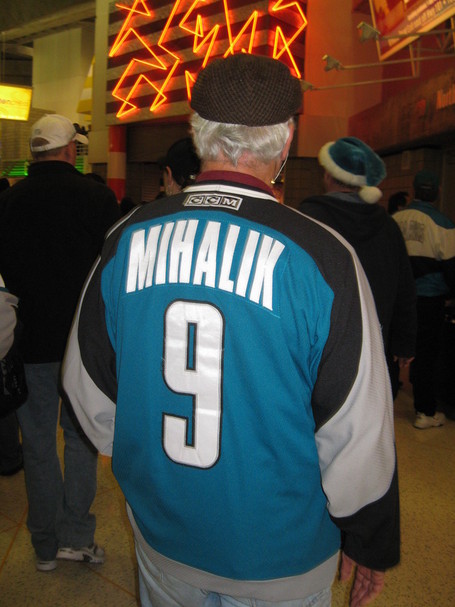 Minor debate among FTF'ers = is this a variant spelling of Milan Michalek's last name (Czech, obviously)?  I'm firmly in the "no" camp but I'm willing to stand corrected.  Jersey Foul until further notice. 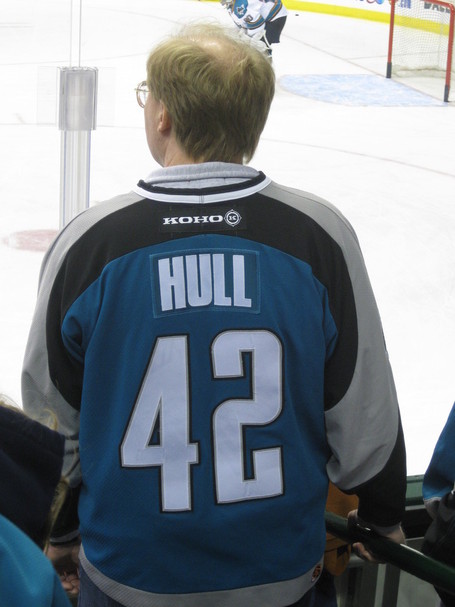 Sharks jersey fouls aren't confined to the Bay Area = this (how shall I put it?) eyesore was spotted at the American Airlines Center in Dallas, Texas, just a few weeks ago.  Lemme state the obvious = neither Brett nor Bobby wore #42, and they sure as shit didn't play for San Jose.  Wearing it in Dallas only makes me want to scrape out my eyeballs more.

Apologies to the man if his name is Hull - but still.  If my name's Yzerman, it ain't going on teal. 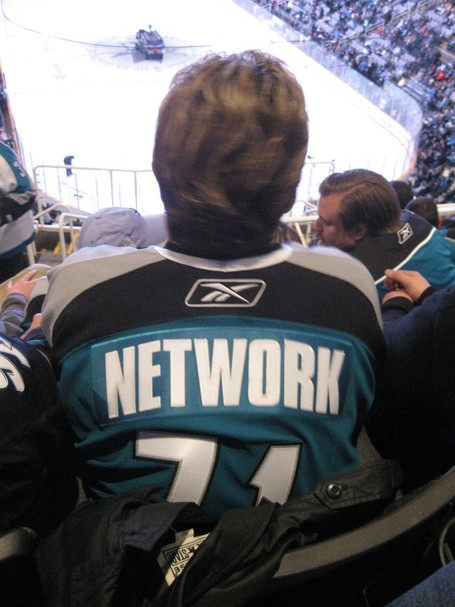 Spotted at the FTF Night at the Tank... modestly foul.  Here are three from Puck Daddy, that mostly speak for themselves: 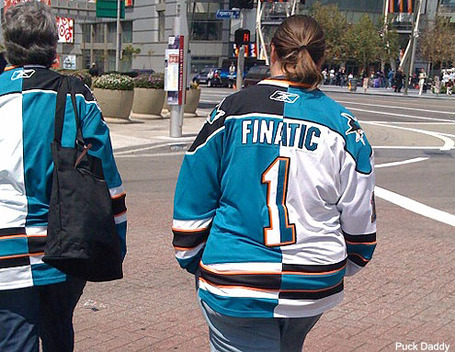 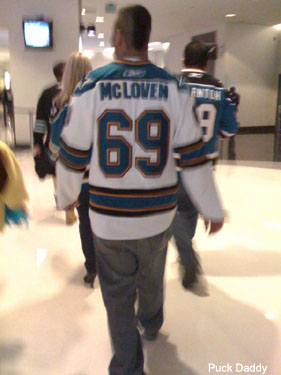 One of many Superbad-inspired jerseys... it does get a genuine chuckle, admittedly. 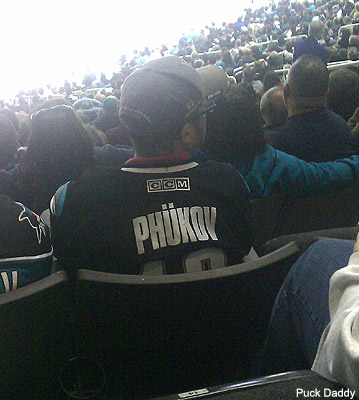 This guy is actually something of a local legend - after one playoff victory over Nashville, he tore down Santa Clara Street yelling "Fuck yeah!" into vans and other idling vehicles.  A spectacle to behold - and watch on video (what I wouldn't give to find that video again... frakking computers).

And now for something completely different.... 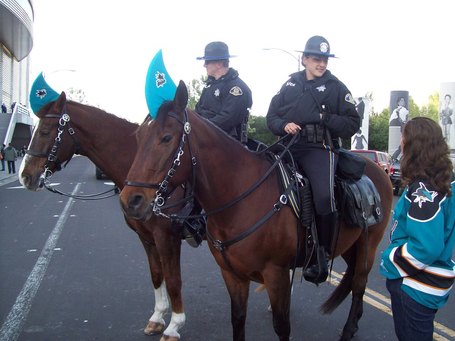 We're not Puck Daddy, so we can dink around a little more with the guidelines to include animal silliness - just limit how many gerbil-in-a-teal-ball photos you submit, hmmm?  No limit to the gerbil-in-a-real-shark's-mouth pics, however.

We'll be posting updates as we receive them - thanks for your submissions!

From the fine collection of Morti come some of the most awesome Jersey Fouls you'll see. 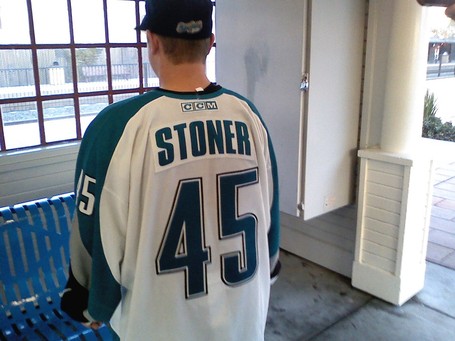 Apparently he was a prospect - so perhaps not a foul, but still convenient.

[UPDATE] = He was a prospect (see Morti's proof in the comments).  Not that I'm going to take this photo down, however :-D 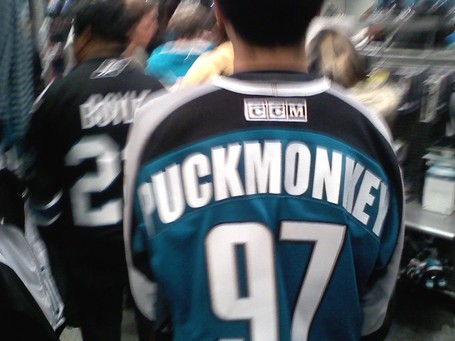 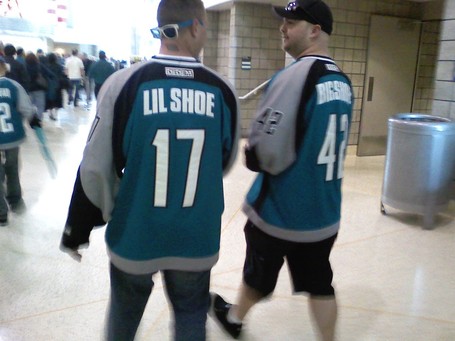 Lil Shoe and Big Shoe, which leads us to.... 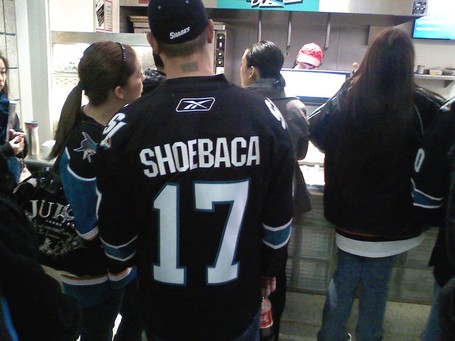 SHOEBACA! (has to be the same dude - note the number)

And finally, the coup de grace = 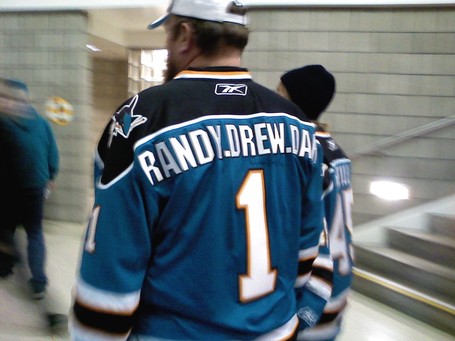 Jamie Baker's gotta be mighty pissed he's left off this tribute to the Sharks broadcasters. 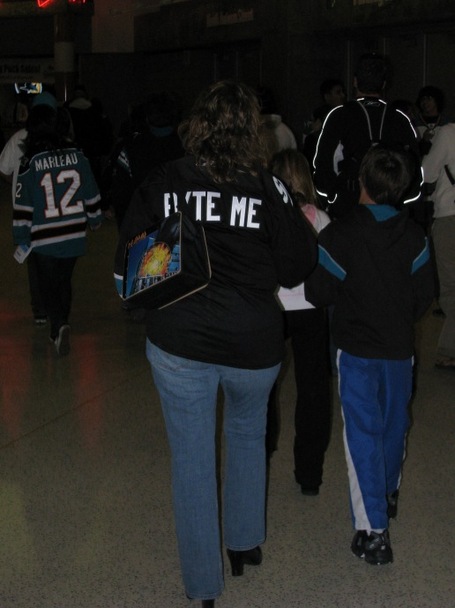 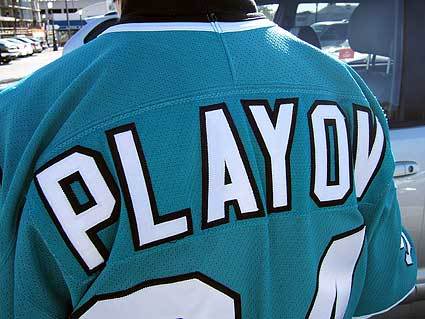 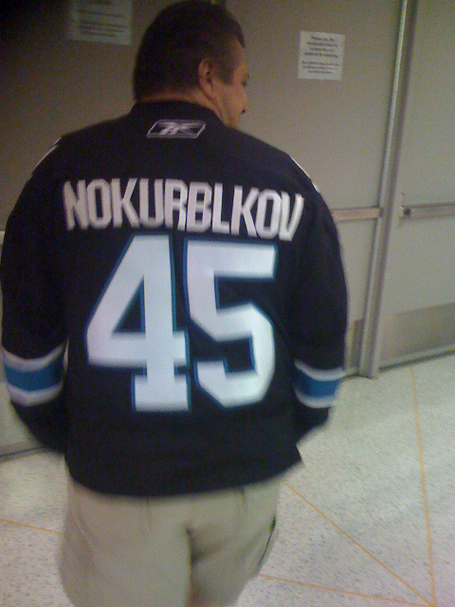 No wait - THIS is everybody's favorite Russian player! (thanks to fatbabies for the pic)