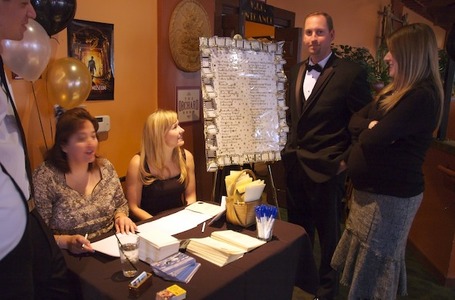 Apparently this is the only photo of Danny Miller available online.  Note that he dressed for the occasion.

ElvisVF101 was an eyewitness to what we hope will be one of those stories we tell the kids around the campfire, involving San Jose Sharks in-arena host Danny Miller =

There will be stories told of this man very soon, but, here’s the scoop:

Bunch of us were at the Firehouse downtown before the game for Conico and Grays’ birthday. Big group too, about 14 or so.

We’re sitting in the back, and Danny Miller walks out of the bathroom. We all give him a cheer, and he is sortuv taken aback, and then says, "Let me guess, Shark’s fans?" And he comes over and chats with us for a bit. Tells us a bit about the situation with Joe Ike, asks us about FTF, and in general is pretty cool.

We tell him its Conico and Grays’ birthday. He says he’ll get them a drink. We can’t find the waitress, so he says he’ll catch her on the way out and leave some cash.

Also, Conico trades numbers with him in the hopes of getting on the ice between periods.

Come time to pay the bill, we found out Danny F***ing Miller left us $100 for our bar tab, well over half!

Ladies and Gents, please raise your glasses to Danny Miller!