News and notes across the National Hockey League

Share All sharing options for: News and notes across the National Hockey League

As the majority of us pay attention to Greiss Watch 2010 this morning, here are a few thoughts on some of the happenings in the NHL over the last couple days.

In a game against the New York Rangers on Monday, former Anaheim Duck James Wisniewski took a post-whistle opportunity to show Sean Avery just how he feels about him. I think it's safe to say this one probably won't blow over with the league:

While there's no precedent here for Colin Campbell to work off of (as if that's stopped him from making confusing and inconsistent rulings before), you have to figure the NHL will step in and make an example out of Wisniewksi in order to avoid these types of obscene gestures later down the road. One game is probably what it's going to cost the 26-year old blueliner, which is completely understandable. Anything more than that is probably too severe-- anything less and you have a situation where the door remains open for other types of inflammatory gestures that have nothing to do with the game of hockey.

Give him a game and move on.

In the first period of Chicago's 4-3 win over the Buffalo Sabres yesterday, Buffalo was attempting to clear the puck out of the zone in order to transition up the ice. Pominville was set to receive the puck along the halfboards as Hjalmarsson flew in from the point. Then this happened:

Pominville was diagnosed with a concussion after the play, but did not require a trip to the hospital.

As we can see in the video, Pominville is in a compromised position-- his back is turned towards Hjalmarsson and he is hit from behind along the boards, which typically has been a no-no for the league's disciplinary group. Hjalmarsson was docked with a 5 minute boarding major as well as a game misconduct on the play.

However, the video is pretty clear in showing that Pominville was aware of Hjalmarsson's incoming contact, or at the very least, he is aware that contact could potentially be made. He turns his head before the hit to analyze the situation, and although the amount it takes from that glance to contact is less than a second on the game clock (i.e. the rapidly developing nature of hockey puts more responsibility on the offending party to make a rational decision compared to the offended party), Pominville did nothing in his power to avoid contact or slightly protect himself from the hit. Both individuals seem to share some of the blame for the result in my opinion.

This is not to say I condone Hjalmarsson's actions or feel he made a good decision-- his responsibility is to recognize when an opposing player is vulnerable, especially along the boards with his back turned, and light contact to separate Pominville from the puck would have been a better decision on his part. But when injuries are avoidable by both parties that is an indicator to me that Pominville could have protected himself more than he did, even when you take into account the fact that the responsibility to avoid dangerous situations lies more with the offender (Hjalmarsson) than the offended (Pominville).

I bet this nets Hjalmarsson somewhere in the two game range-- the NHL will likely want to avoid handing out dual one game sentences for Wisniewski and Hjalmarsson on the same day considering the extent of the injuries (aesthetic vs. the vicious nature of blindside hits that cause head injuries). Hjalmarsson didn't target the head, so that rule is unapplicable here, but he did initiate contact on a player who was in a bad position near the boards. Two games is sufficient punishment considering everything involved.

Anaheim off to a miserable start 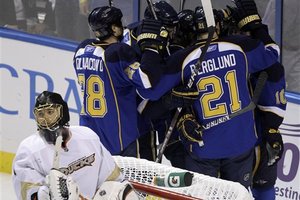 As Earl Sleek of Battle of California has chronicled extensively, the Anaheim Ducks are playing some pretty lousy hockey right now, struggling immensely in just about every department imaginable. Here's some updated statistics I threw together for their first three games, but be sure to check out BoC in the coming days as I'm sure Sleek will be crunching some numbers in between hiding everything with a sharp point in his house before Anaheim plays Vancouver on Wednesday:

As Sleek so eloquently stated, "I totally remember attending a day of this year's Ducks training camp, yet there's no evidence I can see that it ever happened."

Almost enough to bring a tear to your eye eh?

I think it's safe to renounce atheism as a legitimate belief system. There's no doubt in my mind God does exist, and he is doing his best to restore order to this wicked world which we live in.